John Kerry in Russia: USA is losing the continent of Eurasia 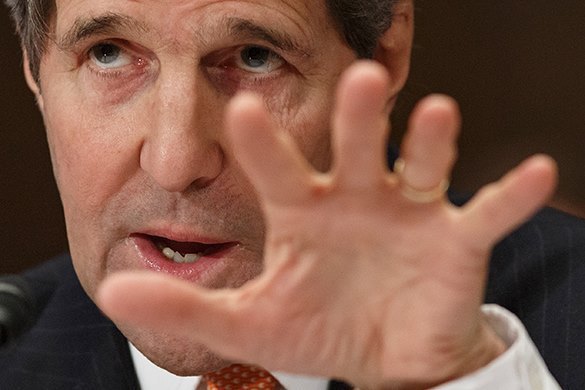 According to Kerry, it is important for Russia and the United States to keep communications open even at the time when relations remain tense.

Also read: Americans have a right to act stupid

Afterwards, US Secretary of State John Kerry is flying to Turkey, Antalya, to meet with allies and partners who are going to take part at the meeting of NATO foreign ministers. Kerry will then return to Washington to participate in President Barack Obama's talks with the leaders of the Gulf countries.

Pravda.Ru asked political scientist, director of international projects of the National Strategy Institute of Russia Yuri Solozobov to share his views of the intrigue of the meeting. The May 9 parade showed a very high degree of consolidation of the Russian society around Vladimir Putin as the national leader. Secondly, the Russian army demonstrated its strength as well, meaning that Russia is ready for any development of the scenario, the expert told Pravda.Ru.

"If the West wants war - fine. Russia has all necessary resources for that, but the country does not want to fight. If the West wants peace, then Russia has long been open to peace, but the road to peace lies outside the quadrangle of Kiev, Berlin, Paris and Moscow," said Yuri Solozobov.

Noteworthy, US Secretary of State John Kerry said that US and EU sanctions can be lifted after Minsk accords are fully implemented.

"Anybody who has any control over anybody (in eastern Ukraine) needs to take every step possible to fully implement" the cease-fire accord, Kerry said at a joint news conference with Russian Foreign Minister Sergey Lavrov.

The intrigue of John Kerry's visit to Moscow is about the change of the "Norman format" from four to five members, Yuri Solozobov told Pravda.Ru.

The expert stressed out that the largest US embassy in the world was in Ukraine. According to him, it is an open secret that the Ukrainian Security Service is a branch of the CIA. Many American advisers actually command the political regime in Kiev. "There is a strange situation that we have. We agree on a cease-fire, but then some people start breaking it from the Ukrainian side following a sudden command from the outside. Without the participation of the United States such a truce is hardly possible," the expert told Pravda.Ru.

The expert also pointed out a diplomatic solution to the question of sanctions. "The parade has shown outlines of a possible future strategic alliance between the Eurasian Economic Community and the PRC. Even the Moscow-Beijing-Delhi triangle has obtained distinct military specifications, for example, in the field of the joint air and missile defense system. The US is terribly worried about all this. The Americans realize that they are losing the continent of Eurasia. It is the dramatic change in the balance of forces on the world political scene that prompted Secretary of State Kerry to arrive in Sochi to negotiate with Putin and."