Who wants to take Donbass? 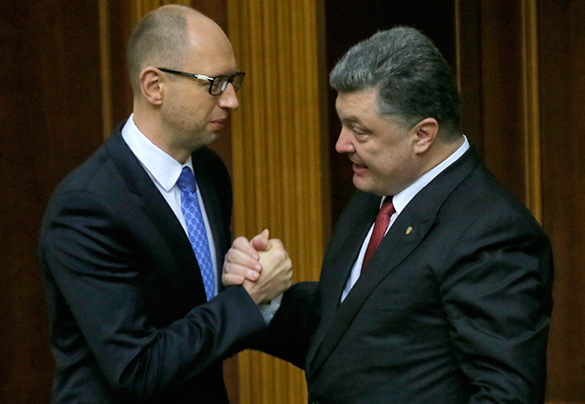 The Ukrainian authorities exposed information about Poroshenko's suggestion to Putin to take the Donbass only two months later. How should Russia respond to it and for whom was the message? For the time being, spiders in Ukraine continue to kill each other not just for the privilege of owning food, but also for the right to be called the alpha male.

The news about the conversation between Putin and Poroshenko arrived on pages of Forbes magazine that cited its own sources. Reportedly, here is what Russian President Putin said: "[Poroshenko] told me directly: 'Take the Donbass.' I replied: 'Are you out of your mind? I don't need the Donbass. If you don't need it, declare it independent,'" Forbes wrote.

"Poroshenko suggested that Russia take Donbass for financial support. And Putin said that talking about it can only go in if the Donbass will become part of Russia, in the meantime Donbass - part of Ukraine, and all payments must be from the Ukrainian side," an anonymous source told Forbes.

According to the publication, Poroshenko made the suggestion to Putin at one of the meetings within the scope of Minsk-2 talks. Putin said about it at a closed meeting with the board of the Russian Union of Industrialists and Entrepreneurs (RSPP). The head of RSPP, Alexander Shokhin, said that Vladimir Putin's words about the conversation with Ukrainian President Petro Poroshenko had been misinterpreted and distorted. Shokhin refused to clarify the situation.

Obviously, the Ukrainian side needed a reference to a Russian source to be able to retreat. After all, it was a serious allegation against the backdrop of all the calls for the unitary and integral Ukraine.

The head of the information policy department of the Foreign Ministry of Ukraine, Yevgeny Perebiynis, wrote on his Twitter that Putin misunderstood Poroshenko, who was speaking Ukrainian to him. According to Perebiynis, Poroshenko asked Putin to get out of the Donbass. This does not sound convincing, as it was very much unlikely that Poroshenko was speaking Ukrainian with Putin. Yet, it does mean that the conversation between the Russian and the Ukrainian presidents took place.

Here is what Putin's official spokesman Dmitry Peskov had to say on the matter. "It's not very nice that participants of the meeting told about the content of the conversation with the president. Let it be on their conscience, whether they told the truth or a lie. I am not going to comment on that."

Thus, it is clear that it was Ukraine that started the whole story. Why now?

Firstly, Ukrainian radicals, for example, Freedom party (Svoboda), do not mind giving the Donbass away so that it does not put obstacles on Ukraine's road to Europe. In addition, Ukraine stopped paying social benefits and wages in the Donbass, which may also indicate Kiev's readiness to give the eastern territories of Ukraine to Russia.

To crown it all, the Minsk agreements are seen as Poroshenko's capitulation in Ukraine. In the West, by the way, this idea also has its supporters. "Some analysts believe that there is an alternative way to end the crisis in Ukraine without hostilities or long-term economic sanctions. This way is about giving Ukraine's eastern regions to Russia, so that Kiev could join Europe with what has been left of Ukraine, Forbes wrote in September 2014.

"The Donbass in its current form is completely unacceptable for Poroshenko as a part of Ukraine, - Alexei Zudin, a member of the advisory board of the Institute for Socio-Economic and Political Studies told Pravda.Ru. - Poroshenko, it seems, is willing to sacrifice these territories to preserve the government structure he has today. If he ever conducts a constitutional reform, he wants this constitutional reform to take place in the conditions when the breakaway territories are no longer a part of Ukraine, so that other regions of the country do not follow their example," the expert told Pravda.Ru.

Thus, the whole story looks like a part of Poroshenko's plan to bid farewell to the Donbass. There is another point of view. Hardly had the conflict between Kolomoisky and Poroshenko faded, when a new conflict surfaced - this time between Poroshenko and Yatsenyuk. The struggle escalates.

Russia's position is clear. Russia would welcome the independent Donbass, but Russia would not maintain the region financially, because it was not Russia that orchestrated the coup in Ukraine.