For all of their flapping, lying jaws blaming Russia for the conflict in Donbass, the US/UK seem intent on sending their repulsive, disgusting military (war criminals) into the former Ukraine. It is clear who it is that's looking to escalate the conflict and keep it hot and bloody, the US/UK. For now, the EU will get a pass since they at least tried to get a peaceful resolution with Minsk2. 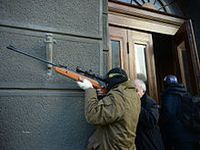 Announcement of intent to violate Minsk2:

"Before this week is up, we'll be deploying a battalion minus... to the Ukraine to train Ukrainian forces for the fight that's taking place," Foster stated.

"What we've got laid out is six United States companies that will be training six Ukrainian companies throughout the summer."The training will take place at the level of US and Ukrainian national guard companies, Foster explained, adding that "we have nothing above battalion staff level" engaged in the military training.

"The current plan is for US forces to stay six months, he said, and noted there have been discussions about how to increase the duration and the scope of the training mission."

The UK also announced that they would be sending about 75 of their military over.

This reminds me of Libya and mission creep. NATO, after obtaining UN resolutions that were limited to a no-fly zone, they proceeded to expand that scope, too, with a merciless bombing of civilians and civilian infrastructure, after inundating the place with terrorists and foreign mercenaries. The result today is total chaos, a total jungle of dog eat dog, misery and deprivation.

"Withdrawal of all foreign armed units, military equipment, as well as mercenaries from the territory of Ukraine under the supervision of the OSCE. The disarmament of all illegal groups."

That also applies to NATO scum and the US/UK!! On what universe are they exempt from obsering Minsk2 while regurgitating false accusations against Russia? Russia, the country that has bent over backwards for peace. The country that actually sustained multiple and varied attacks while gazing on innocently?

I also want to mention that for all of the flapping jaws crying about territorial integrity, the US/UK/EU certainly had no qualms about violating Ukrainian territorial integrity when they violently overthrew the democratically elected government of Ukraine and installed US trained agents to facilitate their total takeover. It was and is their intent to take Ukraine for themselves and to then take over the Russian Naval base in Crimea.

The globalists, personified by the US/UK, want war. They desire to drag Russia into bloody conflict. They have made no secret about the fact that they want to affect regime change in Russia so that Russia can be broken apart in order to steal resources. This is exactly what they have accomplished in Iraq, Afghanistan and Libya. Thanks to Bashar Al-Assad and his loyal, competent Syrian Arab Army, they are failing in Syria, as hard as they try (while arming ISIS terrorists).

The US Empire is all about resource acquisition, destroying nations, building a global government that will absolutely dictate to absolutely every land on Earth.

What will US/UK troops be teaching Ukrainian forces? How to more efficiently murder unarmed civilians? How to act like sexual deviants and commit rapes? How to urinate on corpses and into food? How to waterboard? How to torture more efficiently? How to bust down doors? How to steal valuable artifacts and stuff them into suitcases for the trip home?

Most of all, will they teach them how to better organize false flag attacks so that they won't be so obvious? We have seen the many attempts to get away with them: MH17, the attack on Mariupol, the Volnovakha bus attack, the Donetsk attack, the murder of Boris Nemtsov. Fortunately, with forewarning that is possible through reliable informants, false flags can be averted as we have warned whenever possible on this space right up to the warning about smuggled nuclear material being placed in Donetsk.

I would expect that should this invasion occur, or preferably BEFORE it does, that Russia would take this matter before the UN Security Council and the General Assembly. There should be an assertive, firm warning to KEEP OUT. Remember their insistence that Russia adhere to Minsk? It goes for them too. Failing that, a military counter move will be absolutely essential.

Is this a smokesreen being thrown out by Reuters, one of their trusted mouthpieces.

"U.S. plan to train Ukrainian national guard troops is "on hold" pending implementation of a ceasefire deal between government troops and Russian-backed rebels, a spokesman for U.S. forces in Europe said on Friday.

"The training mission, first announced in August last year, had been due to start this month. One battalion of U.S. soldiers is due to train three Ukrainian National Guard battalions...Later on Friday, a spokesman for U.S. forces in Europe, confirmed the delay in a statement and said: "The U.S. government would like to see the Minsk agreement fulfilled."

Is this for real or is the invasion genuinely being put on hold? I certainly hope so. Moving ahead would have made the prospect of global thermonuclear war move the clock dangerously forward. We can only hope they are not considering "sneaking in." It wouldn't be the first time. As is well known, there are a lot of foreign mercenaries in the country already with no hope in sight of getting rid of them. Quite the opposite, actually.

GTS (Glacier Technology Solutions LLC) - We are military contractors working directly with the US Marine Corpsassisting them with their immersive simulation training program.

Currently, we are looking for role players of Ukrainian and/or Russian ethnicity and language skills. Need MEN ranging 18-65 years of age."

We've already seen some that were preparing to stage a false flag and blame Russia wearing Russian uniforms with Russian insignia. Sorry, we know what you're up to.

There was an appeal to all mass media, especially those working in the Donbass. Minsk2 has not been the first truce, and each time the media has been stupidly announcng that the war was over, the truce puts an end to this war. People should NOT be fooled by this.

They will believe it and start to go home. These people were evacuated to safe areas and some who believed and returned home only came back to end up dead. Right now, the Ukrainian army is building up its forces for another offensive. Hence the "trainers."

Tell people the truth. People need to remain safe in safe areas and stock up, and know what to do and where to go in case of anything. All media are implored not to be fooled again by the latest truce. The Kiev Nazi Regime forces are still alive and growing.