Should Lithuania be very afraid of Poland? 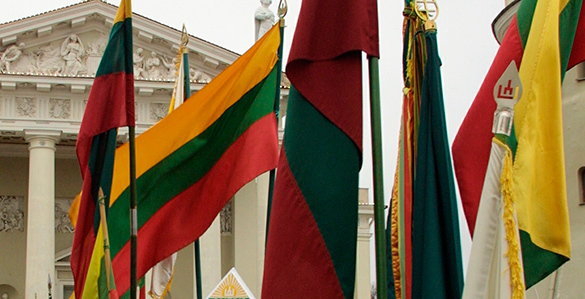 President Dalia Grybauskaitė is still ranting about the threat of an imminent Russian invasion of Lithuania and other Baltic states to re-establish the "evil USSR Empire". But truth has always been far from fiction. To date, there is yet any evidence to indicate that Russia has such a nefarious hegemonic design.

There is no logical reason for Russia to "invade and occupy" Lithuania. Just like every other countries in the World, Russia has a natural legitimate concern to be wary of hyper-antagonistic neighbours, especially because its existence has constantly been undermined overtly and covertly throughout most of the 20th Century. Moreover, tolerance of provocative encirclement has its limits.

Whose side is President Dalia Grybauskaitė really on? There are serious accusations given in Rūta Yanutene's Raudonoji Dalia implicating that Grybauskaitė was and is still an agent of the KGB and its remnant, to the detriment of Lithuanian nationhood. Her life-long chameleonic behavioural pattern confounds easy confirmation or dismissal of this proposition. Nevertheless, being "Red Dalia" may not be the only sin of Grybauskaitė since her still very secretive Komsomol days. It is however clear that many of her present coteries are former KGB operatives.

Various ruthless methods deployed psychopathically by Lietuvos Dalia to silence her critics and political adversaries were undoubtedly KGB-esque. But ruthlessness to crush dissidents, infidels and heretics has always been an essential element of survival in virtually all ruling regimes through the ages. The perplexing question is whether the present virulent anti-Russia stance of Lietuvos Dalia is merely a ploy to deflect inconvenient revelations about her deep involvement with the KGB in earlier times.

Present militarization strategy in Lithuania includes re-introduction of conscription and lobbying NATO to establish a command centre with permanent stationing of foreign troops in Lithuania. Conscription may be problematic as young Lithuanians have been departing in large numbers to wealthier EU states to escape crushing poverty in Lithuania. Indeed, the annual emigration rate has been at the level of 1 to 3% of total population since 2010.

In the two decades since the demise of the Lithuanian Soviet Socialist Republic, the population of Lithuania has declined by nearly 18%! In conjunction with disastrous increase in death rates (and concomitant steadily low birth rates) since the start of the post-USSR era, the unabated severe decline in the total population would definitely harm the survival of the Lithuanian state. The priority of the Lithuanian state should thus rightfully be rectifying the demographic crisis instead of expending national resources to counter manufactured military threats from Russia. In any case, if there was a war between Lithuania and Russia, the fire power of Russia could easily overwhelm any Lithuanian military forces, albeit enlarged, very quickly.

Perhaps there is another reason for Lithuania's ambitious goal of militarization. The Lithuanian hyper-invectives against Russia may just be an ingenious stratagem for soliciting NATO military presence to defend a territorial threat from an entirely different direction. The real threat to Lithuania may be Poland which is also undertaking an accelerated militarization and re-armament program. It is no secret that Poland is aiming to build a potent independent military force outside the NATO framework.  The increasingly belligerent rhetoric of Polish Foreign Minister Grzegorz Schetyna about reviving Polish geopolitical influence in Eastern Europe is particularly worrisome. Contemporary Polish national narrative is becoming very aggressive in lionizing the glory days of the Second Polish Republic (Rzeczpospolita Polska). In the 1918-1939 hey days, Poland was in control of the Wilno (Vilnius) województwo in Lithuania. The recent shadowy emergence ofWileńska Republika Ludowa was reported widely in Polish and Lithuanian news media. Interestingly, the information in the "official" website of this polity was also posted bilingually in Russian as Виленская Народная Республика. This new real or fictional "People's Republic of Wilno" is certainly reminiscent of the Polish-instigated Republic of Central Lithuania (Republika Litwy Środkowej) of the 1920s. Protecting the beleaguered Polish-speaking people in Wilno from continuing draconic Lithuanization could become the convenient Polish casus belli to invade and re-occupy the Vilnius region.

The recently announced formation of a tri-national military brigade will be led by Poland with minor participation of Lithuania and Ukraine. The official goal is to fight "Russian aggression". But the real purpose might be a part of the long-range plan of Poland to spy on targeted Lithuania and Ukraine military preparedness for re-establishing Polish hegemony in territories lost permanently during WWII. It is ironic to note that this tri-national brigade will be headquartered in Lublin (Poland). In 1569, the Union of Lublin agreement was signed in Lublin between the Grand Duchy of Lithuania and the Kingdom of Poland which had resulted in the formation of the Polish-Lithuanian Commonwealth (also known as the First Polish Republic) of which territories included present-day Lithuania and present-day western Ukraine.

It is ludicrous to believe that boosted armed forces of Poland could ultimately withstand those of Russia. However Poland has ample military might to bully less armed neighbours such as Lithuania. Would Lithuania be protected from a Polish military invasion through its much-touted NATO membership? The NATO Charter, particularly the often-cited Article 5, does not explicitly proscribe any remedial action in the event that one NATO member launches military action another NATO member. It is interesting to note that many allowances have been made expediently for unilateral military action by an individual member state, in the NATO operational history. For example, Turkey (a founding NATO member state) invaded Cyprus in 1974 to protect threatened Turkish-speaking Cypriots from the re-energized ethnocentric Enosis politics of Greek-speaking Cypriots who had active open support from Greece, another founding member of NATO.

The outcome was that NATO made no reprimand, and took no punitive action against Turkey. In comparison to Turkey, Greece was considered then to be a less valued bulwark against the Soviet Union. Turkey still controls about 1/3 of Cypriot land mass today. During the past 25 years, there have been periodic lethal low-level military skirmishes between Turkey and Greece in the air space over the Aegean Sea. Which side would NATO choose to support in this "local" dispute that is devoid of any Russia-encirclement geopolitics? Poland definitely has much more economic, political and military influence than Lithuania in the NATO and the EU. There will probably be no intervention whatsoever by the NATO-EU Axis.

Therefore, Lithuania could be sacrificed. In the late hours of such an existential threat, Lithuania might need Russia once again to help in defending Vilnius from neo-Polish military assault. The alleged continuing close tie of Lietuvos Dalia to the ex-KGB operatives in Russia may be helpful in this instance. In an urgent appeal for maintaining international law and order, Lithuania might publicize vehemently that the Vilnius region (as well as Memelland) was given irrevocably to Lithuania by the then Supreme Leaders Stalin (USSR), Churchill (Britain) and Roosevelt (USA) at the conclusion of the secretive "dividing the World" negotiation in Yalta (Russia) in 1945. However, Lithuanian outcries may be futile as there has never been any fairness or rightness in the preservation of international order. If it has not done so already, Lithuania would be wise to prepare a contingency plan to evacuate the national capital from Vilnius to Kaunas (again!).

For similar reasons, both Ukraine and Belarus should be afraid of a resurgent Poland. Between 1918 and 1939, Poland had also ruledWojewództwo lwowskie (Lviv oblast) in present-day Ukraine, and Województwo nowogródzkie (Grodno voblast) and Województwo poleskie(Brest voblast)in present-day Belarus,with their then large Polish-speaking population.

At an opportune time, Poland could easily fabricate a cover condition of being invited by a fake Republika Lwowie, for example, to re-occupy the lost Galician territory of the Second Polish Republic. Recovering the much larger traditional territories of the 1569-1795 First Polish Republic might be a step too far to achieve for present-day Poland in the near term. Separately, there is a timely peaceful pathway of Polish annexation.

Many Ukrainians (especially those living in western Ukraine) are clamouring vocally for an alternative better life, in view of the continuing successive policy failures of the current governing regime in Kiev. As Ukraine is becoming increasingly destitute, "voluntary" union of Lviv and Volyn oblasts with more-prosperous Poland is emerging to be an expedient means for inhabitants of these border oblasts to access EU largesse instantly for alleviating desperate poverty and deprivation. Poland is unlikely to be a disinterested party on this opportunity of "bloodless" recovery of lost Galician territory. In contrast, successful Polish military invasion to recover lost Polish territory in Belarus might be very problematic. Fortuitously Belarus is already well defended by its long-standing military alliance with Russia.

Lithuania should be very afraid of Poland. The increasingly bellicosity and re-armament of Poland may indeed be a present and imminent physical danger. Lietuvos Dalia should be very familiar with the remarks attributed occasionally to Karl Marx......."Trust no one, suspect everything".

Grybauskaitė is cunning and devious. Regardless of her alleged past or present KGB connection, Lietuvos Dalia will undoubtedly live on once again by adapting instantly to whatever new realpolitik on the ground. Is she taking Polish language lessons secretly already?

Independent analyst on social justice issues, based in Singapore

Poland prepares to go on crusade against Russia