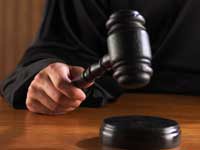 Yet another court decision that can be regarded as "communist witch-hunt" was made in Lithuania. The Supreme Court ordered two KGB veterans to pay compensation to anti-Soviet underground fighters.

This story has been dragging on for several years. Back in 2004, former KGB colonel Vytautas Vasiliauskas and undercover agent Martin Zhukaytene appeared in court as defendants. They were reminded that on the night of January 2, 1953 Zhukaytene revealed the location of some of the latest fighters against the Soviet power "Forest Brothers" Jonas and Antanas Ashtrauskasov. A unit of security officers headed by Vasiliauskas destroyed them. The remains of the brothers have never been found.

There is no need to remind that in the post-Soviet Lithuania all "Forest Brothers" who fought against the Soviet power are considered national heroes. The authorities of the country did not seem to be bothered by the fact that among the "brothers" were not only those who resisted the forced collectivization and deportation to Siberia (although there were quite a few of those), but also facilitators of the Nazis. For the period of 1945-1953, approximately 20,000 of "Forest Brothers" were killed by the Soviet army and security organs in Lithuania.

All employees of the Soviet security forces involved in the elimination of "Forest Brothers" were declared "occupiers" and prosecuted. Contemporary Lithuanian judges had little interest in the fact that these people were following the orders of the leadership of their own country at the time - the Soviet Union. Accordingly, Vasiliauskas and Zhukaytene became just other victims of the "restoration of the historical truth".

In 2004, the trial court found two now very elderly people guilty of murder of "Forest Brothers." Vasiliauskas was sentenced to six years of imprisonment, and Zhukaytene - to five, but both have been exempt of the sentence due to poor health. The defendants filed a cassation. However, the Court of Appeal decision of 2007 stated that they must pay 150,000 litas (approximately 60 thousand dollars) to the relatives of brothers Ashtrauskasov.

The KGB veterans appealed to the expanded board of the Lithuanian Supreme Court whose decision is final and not appealable. However, all that they managed to achieve was to reduce the fine amount to 50 thousand litas. The Supreme Court ruled that "the victims of genocide have the right to seek redress for an indefinite period."

In the years of independence Lithuanian Themis was constantly used for settling political and historical accounts. Early this year former head of the Socialist People's Front of Lithuania Algirdas Paleckis was called to court. He was blamed for questioning the decision of the parliament that the denial of aggression by the Soviet Union of January 13, 1991 is a criminal offense. However, during Vilnius events in the beginning of 1991 Lithuania was still a part of the USSR and Soviet agents were working on their own territory.

Former leaders of the local Communist Party Mykolas Burokyavichyus and Juozas Ermalavichyus who, unlike the first president of post-Soviet Lithuania Algirdas Brazauskas, did not abandon the Communist Party, and served long terms in prison on the historical and political grounds. Former Communists and members of law enforcement agencies were sentenced to various terms and fines.

Today the Lithuanian justice is dreaming of getting to 25 participants of the storm of the Vilnius television station on the night of January 13, 1991 who live in Russia and Belarus. They are accused of war crimes even though there had been no war in Lithuania since 1945. Yet, this did not stop the Lithuanians. They wanted to condemn the 50 former Soviet leaders who were allegedly involved in a "coup attempt."

Historical revenge has long become nearly the basis of Lithuanian politics. The new verdict against the veterans of KGB is another proof. Why is modern Lithuania not willing to stop the "communist witch-hunt?" Mikhail Alexandrov, head of the Baltic department of the Institute of CIS and Baltic Countries shared his thoughts with Pravda.ru:

"The answer to the question who "Forest Brothers" are is ambiguous. There were relatively few of them. They were a hodgepodge of Nazi accomplices and those dissatisfied with collectivization. However, nearly most of them went into the forest because they showed their worst side in the years of German occupation and had something to fear. Another thing is that a large part of the Lithuanian population, angry at collectivization, mistakenly supported them, seeing the "Forest Brothers" as freedom fighters.

However, the Lithuanian authorities and Lithuanian justice that make questionable politically motivated verdicts are driven not by the search for the historical truth, but practical policy. The current ruling coalition has lost half of the votes at the recent regional election. It has nothing to bring to the people in terms of solving socio-economic problems. To avert attention, they started the new "witch-hunt".

The Russophobian approach is largely to blame for the fact that the ruling government cannot solve current issues. It conflicted with Russia, and did not let the president Dalia Grybauskaite mend relations with Belarus. In recent years the relationship with Poland has deteriorated sharply as well due to the problems of Lithuanian Poles. Nationalism and historical revenge have ultimately harmed the economic ties with the country's neighbors, which hurts the wallets of ordinary residents of Lithuania.

Nevertheless, the nationalistic part of the Lithuanian elite that still has the majority in the parliament strongly cultivates Russophobia and nationalism. The latest sentence and the demand that Russia pays $23 billion for the "Soviet occupation" is the evidence of this attitude. If they change the course, the voters will question whether they need politicians who have brought the country into a dead end. Lithuania will need new leaders to change the course.

It should be acknowledged, however, that Russia is not doing enough to reason with the Lithuanian "witch hunters." It could have prepared, for example, claims for certain Lithuanian citizens involved in Nazi crimes. Such cases did take place, albeit on a smaller scale than with Latvians and Estonians. Russia also has relevant organizations, such as the Foundation of National Remembrance, that are dealing with the issue. However, the state must also participate".