Poland prepares to go on crusade against Russia 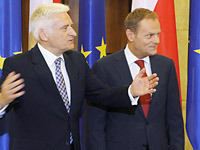 Poland has become the chairing state of the European Union on July 1. The plans of the Polish administration leave no doubt about the fact that the country will primarily be concentrated on the eastern direction of its foreign policy. In particular, Poland will do its best to pull Ukraine and Belarus apart from Russia.

Poland's Prime Minister Donald Tusk shared the ideas about the goals of the country's presidency at the EU several days ago. During his speech in the parliament, Mr. Tusk said that Poland was supposed to become the new engine of the European Union. When speaking about priorities, Tusk particularly mentioned the signing of the agreement of association between the EU and Ukraine. The first priority for Poland will be the reanimation of Eastern Partnership Program, the anti-Russian undertone of which was obvious a long time ago.

The program was proposed three years ago by foreign ministers of Poland and Sweden. It unites Azerbaijan, Armenia, Georgia, Moldavia, Ukraine and Belarus. All these countries were promised the following: economic assistance, simplified visa regime, the establishment of the free trade zone and special relations. No one has ever asked Russia to join the program. Therefore, the program is an attempt to create a zone of EU influence near Russia's western and southern borders.

Poland attaches great importance to the Eastern Partnership Program indeed. It can be seen even on the website of the Polish Embassy in Moscow. The website has a special section devoted to the program. The website particularly says that the European Commission has assigned 700 million euros for the program, but the Poles intend to seek more. The central event to be held during the Polish presidency is the summit of the Eastern Partnership, which is slated to take place in Warsaw on September 29-30 of this year.

"Eastern Partnership is a historical chance for Azerbaijan, Armenia, Georgia, Belarus, Ukraine and Moldavia...For the first time in history, the countries of Eastern Europe will have an opportunity of close economic and political integration with the European Union...The cooperation is based on common values, such as freedom, democracy, the supremacy of law and human rights," the website of the Polish embassy says.

In addition, Poland will create the international solidarity fund during its presidency. The fund will deal with the promotion of democracy in other regions of the world. The first "client" of the fund is Belarus. The EU toughened sanctions against this country, and Poland had had no small share in that. The Poles have not left North Africa out of attention either. African "fighters for freedom" will also have the honor of enjoying Poland's attention.

There is a contradictory detail to all that, though. Alexander Lukashenko, "Europe's last dictator," the "suppressor of freedom" and his Belarus are listed as members of the Eastern Partnership Program. Lukashenko was barred from traveling to the countries of the European Union. However, Polish Foreign Minister Radoslaw Sikorski said on June 27 that Belarus would be invited to the summit of the partnership on the top level.

Here we go. Democracy is democracy, but geopolitics is geopolitics. Lukashenko is a bad guy, but they just turn a blind eye on it for Eastern Partnership. It is also interesting that the Poles do not say a word about Russia in the program.

Pravda.Ru asked expert opinion from Mr. Bogdan Bezpalko, a historian at the historical department of the Moscow State University, an expert for Poland.

"What do you think could be an explanation to the fact that for Eastern Partnership, the Poles are ready to shrug off the fact that Belarusian politicians are not allowed to enter EU states?"

"Geopolitics always stipulates double standards. If there's a need to use military force, they speak about national interests. If they need to interfere in other countries' affairs, they speak about democracy. This is the situation about Poland's approach towards Belarus. The cooperation within the framework of the partnership does not cancel Poland's intention to show influence on political affairs in Belarus to promote democracy there."

"Does Poland want to create its sphere of influence in the east of Europe with the help of Eastern Partnership?"

"This is exactly so. Historically, Poland considers Ukraine and Belarus its sphere of influence, and the country dreams to have it back. The Poles have another goal - to turn Eastern Europe into the main region of the European Union. Poland has been striving for its leadership in the region, and they will try to use their presidency in the EU to anchor this leadership.

"How do Belarus and Ukraine treat Poland's Napoleonic plans about themselves?"

"When Russia is putting pressure on Belarus, there is a risk that Belarus will eventually turn towards Poland and the European Union. The administration of Belarus is willing to cooperate with Russia, but they are also interested in cooperating with the West. The Ukrainian administration has changed, but the country is still interested in having special relations with Poland. Ukraine also wants to become a member of the European Union. Ukraine has been cooperating with NATO actively. Even if it never becomes a NATO member, it will remain close to the alliance."

"How can you explain the fact that Poland does not mention Russia at all in the description of Eastern Partnership Program?"

"This program does not take account of Russia's interests at all. Poland tries not to consider Russia as a serious entity in Europe and Eurasia. They also continue to perceive us as a geopolitical rival. It has been so for many centuries, and it still remains so today."

"Poland wants to set up the international solidarity fund. Do they really want to democratize North Africa?"

"They most likely speak about North Africa to attract more attention. Poland is the staunchest ally of the United States in Eastern Europe, so it has to confirm it. However, this is most likely nothing but a declaration. North Africa is a prerogative of the USA and several countries in Western Europe. Poland is more concentrated on Ukraine, Belarus, the Baltic States, Central Europe, Moldavia and the Caucasus."

"Do you think that Poland's presidency at the EU will aggravate the relations between Russia and the European Union?"

"The relations between Russia and the EU will most likely become more intense because of Poland. Poland will be attracting more attention to these ties, but they are not going to be ruined."