Baltic fascists still enjoy their happily ever after 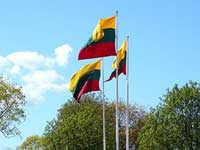 The news of placards and flags with Nazi symbolism appearing in the streets of the capital of Lithuania (Vilnius) surfaced at the end of April. Lithuanian nationalists conducted the provocative action to mark Hitler's birthday. Flags with Nazi swastika were found on April 20 on Tauro mountain in Vilnius. In Kaunas, Lithuania's second largest city, someone put up a poster next to a synagogue saying "Jews out!" and "Hitler was right!"

Lithuanian authorities condemned the provocation of local nationalists having said that such racist and chauvinistic tricks show a negative influence on international relations in the country. The police have launched investigation into the incident in an attempt to find the organizers of the action.

The use and display of Nazi swastika was banned in Lithuania in 2008. However, in addition to swastika, the law also bans the use of the red five-point star. Therefore, the document casts doubt on the historical significance of the Red Army's victory over fascism. The ban of Soviet symbols is a humiliation for hundreds of war veterans, who live in the Baltic states.

In the summer of 1941, when German troops entered the Baltic countries, there were units of local collaborationists formed to wage war against the Red Army. Latvian and Lithuanian policemen began to destroy the civil population from the very beginning of the German occupation.

They conducted daily raids in Riga (the capital of Latvia), hunting for Jews and former Soviet activists. They would execute people in the woods or shoot them dead right in the streets. It was in the Baltic region, where policemen's crimes were especially brutal. Anti-Soviet guerrilla movement continued to exist even after the end of the war, before the middle of the 1950s.

Nowadays, decades after the tragic events of the Great Patriotic War, neo-Nazis still propagandize the expulsion of Jews from the Baltic states. Moreover, such appeals can be seen in the local media.

Uldis Freimanis, a well-known Latvian national radical has recently said that Jews must not give any directions to legionaries telling them whether they can or can not march in the center of Riga.

Latvian security police reacted promptly to Freimanis's remarks and promised to launch investigation into the incident as well.

Human rights activists were much tougher in their reaction to Freimanis's statements. During "World Without Nazism" forum, it was said that the Latvian Embassy in the USA received a message from America's most influential human rights organization Anti-Defamation League. When delivering the letter to the embassy, the director of the organization, Abraham Foxman stated that such remarks were unacceptable. The government of Latvia must publicly condemn such statements, Mr. Foxman added.

Annual marches of former SS legionaries have become habitual to the residents of the Latvian capital. Most often, official authorities simply turn a blind eye on such actions. On March 16, 2009, Latvian legionaries and national radicals marched along the streets of Riga. The police of Riga did not stop any of the participants of the march. Quite of the contrary, the police arrested the leaders of antifascist movements that day.

The Jewish community both inside and outside Latvia was extremely concerned about the action.

"This is just another incident of inadmissible glorification of Nazism in the countries of Eastern Europe. The authorities show no response to the glorification of Nazi criminals in Latvia. Moreover, the authorities are making a huge mistake as they justify the crimes committed by Nazi associates as their struggle for independence. They lay the principle of double standards as the foundation of the state ideology," Boris Spiegel, the president of the World Congress of Russian-Speaking Jewry said.

One can understand Lithuania's, Latvia's and Estonia's claims to the USSR. They were made a part of the Soviet Union coercively before the start of the war. However, it does not mean that they should glorify the associates of German occupants. Any attempt to build a society on cheap nationalist ideology are doomed to fail. National hatred has no face, just as nationalists have neither logic, nor historical justification.