Soviet symbolism has been equated with Nazi symbolism in Lithuania, a former country of the USSR, which is currently known as one of the three Baltic states (Latvia, Lithuania and Estonia). The Lithuanian authorities have banned the use of Soviet symbols all across the nation. 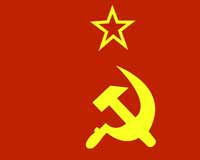 “It is prohibited to demonstrate flags, state symbols, orders and uniforms of Nazi Germany, USSR, the Lithuanian Soviet Socialist Republic,” deputies of the Lithuanian parliament decided.

The law particularly bans the use of Nazi swastika, the Soviet Sickle and Hammer, the Soviet five-point star, as well as the performance of anthems of Nazi Germany, the USSR and the Lithuanian SSR.

Lithuania is not the first country that equated Soviet symbols with Nazism. The parliament of Estonia made a similar decision shortly before the removal of the Bronze Soldier monument. A person wearing a Soviet breastplate can be called into criminal account in Estonia now.

Communist symbolism consists of a series of symbols that represent (either literally or figuratively) a variety of themes associated with communism. These themes may include (but are not limited to) revolution, the proletariat, the peasantry, agriculture, or international solidarity. Communist states, parties and movements use these symbols to advance and create solidarity within their cause.

Usually these symbols, along with a pentangle representing either the five inhabited continents or the five components of communist society (the peasants, the workers, the army, the intellectuals, and the youth), appear in yellow on a red background representing revolution. The Flag of the Soviet Union incorporated a yellow-outlined red star and a yellow hammer and sickle on red. The flags of Vietnam, China, Angola, and Mozambique would all incorporate similar symbolism under communist rule. The hammer and sickle have become the pan-communist symbol, appearing on the flags of most communist parties around the world. However, the flag of the Korean Workers' Party includes a hammer representing industrial workers, a hoe representing agricultural workers, and a brush (traditional writing-implement) representing the intelligentsia.