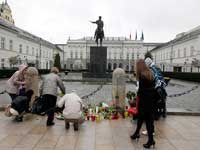 Poland launched a new campaign to revise history. The Constitutional Tribunal  overturned the introduction of martial law by communist authorities of the country in 1981. In addition, the trial of the last leader of the Polish People's Republic (PPR) Wojciech Jaruzelski has been resumed.

According to the decision of the Constitutional Tribunal, the imposition of martial law deemed contrary to the fundamental law of Poland. Now people in the country will have the opportunity to challenge the verdicts of courts made in 1981-1983. This applies, for example, to non-curfew hours, or violations of the rules of registration. At one time, nearly 170 thousand people were penalized by the authorities for the failure to comply with these regulations.

At the same time Warsaw, after the six-month break, has resumed the trial of Wojciech Jaruzelski, who, strictly speaking, imposed martial law on December 13 of 1981. The last leader of socialist Poland is accused of heading a criminal armed group that had a goal to commit crimes.

87-year-old General, who has been recently experiencing serious health problems, appeared in court along with his predecessor as head of state - the former first secretary of the Polish United Workers' Party Stanislav Kanaio who was charged with similar crimes.

The main episode of the charges against Jaruzelski is related precisely to December of 1981. Then, during the suppression of miners' strike organized by the opposition trade union Solidarity, nine miners have been killed. Several thousand people, including union leader Lech Walesa, were arrested. If found guilty, Jaruzelski could face up to ten years of imprisonment.

The former leader of the country firmly rejects all allegations. During the four and a half years of the trial Jaruzelski has repeatedly made it clear that the case against him was purely political. He has acted in accordance with the laws of Poland valid at the time and the imposition of martial law has saved the country from terrible troubles.

What has happened in Poland 30 years ago that makes the contemporary Constitutional Tribunal be still engaged in this case, and have Jaruzelski on trial? By 1980 the economic situation in Poland has deteriorated, shortages of essential commodities have started and the communist leadership had to deal with a massive strike it was not able to kill at the onset.

Gradually, the trade union "Solidarity" has become the main force of the strike movement. It was led by future president of the country, and then a shipyard electrician in Gdansk Lech Walesa. The number of its members has reached several million people, and along with the economic requirements "Solidarity" put forward the political ones. The government was losing control over the situation.

Recognizing "Solidarity" as a force capable of undermining the socialist camp, the West started to support the trade union. Polish foreign radio stations were actively encouraging Poles to disobey. The opposition members openly supported Pope John Paul II who enjoyed unquestioned authority among the Poles (the Communists could not fight with the religiosity of the Poles).

As the "Solidarity" has grown stronger, a looming threat of a Soviet invasion similar to one that happened in Hungary in 1956 or Czechoslovakia in 1968 was hanging over Poland. Communist Party General Secretary Leonid Brezhnev said in 1981 that the socialist countries "will not allow anyone to offend Poland." The main ideologist of the Communist Party Mikhail Suslov arrived in Warsaw and demanded to restore the order in the country.

Under these circumstances, at the end of 1981 all power in Poland was transferred to Defense Minister Wojciech Jaruzelski, a descendant of a noble family, a hero of World War II, Chevalier of many decorations. Caught in the middle, he sprung to action. On the night of December 13, 1981 telephones were disconnected throughout Poland, and Jaruzelski appeared on television. He declared martial law and the establishment of the Military Council of National Salvation.

The introduction of martial law was not without casualties. Nine miners at "Vuek" mine were killed. Many leaders of "Solidarity" were taken into custody, although not for very long. In the summer of 1983, when the situation has stabilized, martial law was lifted. Naturally, the West struck Jaruzelski with harsh criticism, and Lech Walesa was awarded Nobel Peace Prize the same year.

Did Jaruzelski have other options? This is an important question. Some blood was shed, but it was not a lot of blood. In the end, he saved the lives of thousands of his countrymen who could have fallen victims of the Soviet contingent that had entered the country. He saved the lives of Soviet soldiers because the Poles (who were not eager to build communism) would have certainly fought back. He showed the West that he is a force to be reckoned with.

In the heat of the struggle to rewrite the history the Polish authorities somehow forgot that Jaruzelski's family was evicted to Siberia in 1939. When the late president Lech Kaczynski pointedly excluded him from the list of awardees-the descendants of the Poles sent by the Soviet authorities from the current western regions of Ukraine and Belarus far to the east, it looked like an outright mockery.

Those who settle historical scores should be reminded that General Jaruzelski brought the issue of recognizing the shooting of Polish officers in Katyn to the attention of the Soviet leadership. Finally, it was he who agreed in 1989-1990 to conduct free elections and peacefully handed over power to a new, non-communist government. The statement that Jaruzelski has harmed Poland is highly questionable.

Another evidence that the attempt to bring the general to trial for the event in 1981 is of political nature is that he had acted in full accordance with the laws of Poland. However, he is being tried in accordance with the current legislation. It turns out that the Polish fighters with history are trying to make the law retroactive, which completely contradicts the norms of the EU and all other organizations, including modern Poland.

Even Lech Walesa who is not necessarily sympathetic towards the general has objected against Jaruzelski's trial. "During the war Jaruzelski was fighting for free Poland. He was a general. In different history, and under different circumstances he would be considered a great man," said the former leader of Solidarity about the last leader of Poland. This means that the current Court and the Constitutional Tribunal is a new round of "communist witch-hunting."

The deceased president Lech Kaczynski liked to speculate about the history, as does his twin brother Jaroslaw. As it turned out, the current president and Prime Minister Bronislaw Komorowski along with Donald Tusk are not that different or simply powerless to stop the never-ending war with history.