Antarctic Ice to Save the World

A Dagestan-based scientist suggests liquid water can be produced from pure Antarctic ice
According to UNESCO data, about 80 percent of human diseases are caused by bad quality drinking water. And water is not an issue of health only, it is a matter of life for all human beings. 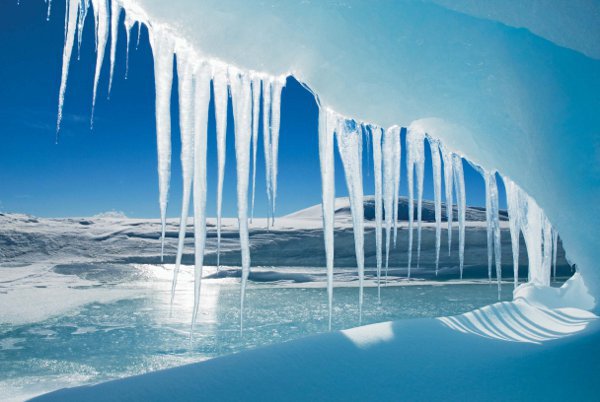 Algeria, Singapore, Hong Kong and Yugoslavia's border territories have to obtain water from other places. North African and Middle Eastern countries are about to run out of their underground water reserves. About 250 million people suffer from lack of water at present. According to experts' estimates, the water problem is to become a real one for up to one billion people in a number of years. Furthermore, two-thirds of the Earth's population will suffer from the lack of fresh water by the year 2025.

Dagestan-based engineer Gamid Khalidov has developed a project called "Living Water." The goal of the project is to provide fresh and ecologically pure water to the countries and regions (including the entire Arabian Peninsula) that suffer from the lack of it. According to the project, this will to the water from the melted snow and ice of at high latitudes. This global project might attract billions of dollars to Russia in the near future. The project has already been acknowledged by numerous scientific and economic councils, conferences, forums. Furthermore, in August of 2000, as per a UNESCO request, the project was sent to the EXPO 2000 show. The project was presented at the show as a video describing the technologies of the project.

World science has been searching for ways to provide water to those areas where people have a need for it. However, scientists have not yet managed to find a way that would be capable of changing the situation fundamentally. Nuclear and solar-powered installations have been built to make sea water fresh and to produce liquid water from water in the air. Yet, none of those devices is capable of solving the global water problem. Installations can produce little water, which can be of low quality at times. In addition, the prime cost of such production is too high. Calculations show that stable water reserves that do not depend either on climate or political conditions can be found for billions of people in the Earth’s high-latitude areas. Water in the state of ice can be found in Antarctica, Greenland, Alaska and so on, where 2/3 of the planet's fresh water reserves are concentrated.

Antarctic ice will destroy the World

Some scientists have already set forth an idea to deliver water in the form of icebergs. They have even calculated possible ways of transporting million-ton icebergs from Antarctica to Saudi Arabia. Up-to-date technologies allow for transportation of icebergs in three ways:

- in a liquid state, although it would take a lot of energy to melt the ice and then deliver it;

- in the form of small pieces of ice; this would allow saving a lot of energy, but the spending on various equipment would increase;

- in the form of large ice bars; this would require lower power inputs, but this method would cause a lot of severe loading problems.

All of the three variants are very expensive, so the prime cost of the delivered water will be too high. The modern level of the handling equipment and shipping does not allow for dealing with such huge masses and dimensions. Moreover, the areas of the supposed activity (Antarctica, Greenland) are not good for big installations and mechanisms. To crown it all off, there are no ships that would be capable of transporting huge ice bars or blocks.

That is why engineer Gamid Khalidov put forth fundamentally new solutions pertaining to ice-handling ways and tools, construction of vessels, transportation methods and so on. All of those suggestions have been patented. More importantly, the prime cost of high-quality pure water will be lower in comparison with the water that can be produced by nuclear-powered water-desalinization plants. The cost of one liter of water that is produced at an American modern desalinization plant is six dollars, while a liter of melted snow water using Khalidov's method costs one cent.

Superpowers fight and bite for chunks of Antarctic ice

Another Cold War, this time in Antarctica?

Trillions of tons of absolutely pure ice are situated in Antarctica. All that ice was formed in a time when there was absolutely no industrial dust in the atmosphere of the southern hemisphere. Ecologists have no reason to be concerned about possible consequences that this activity might cause to the nature of Alaska, Antarctica or Greenland. If one billion people that are short of water drink 2.5 liters of water daily, one billion tons of ice would be needed a year: One square kilometer of ice. Ice reserves do not grow smaller involume owing to the permanent water circulation process.

The engineer suggested that bars and blocks of ice should be produced right there on the icebergs. Special ice-cutting devices will cut ice into bars or blocks, which will then be pulled into the sea and taken to special ice-carrying vessels. All the shipping techniques have been developed and patented.

When an ice-carrying vessel arrives in a Saudi port of Saudi, for example, it unloads ice bars in the water and special powerful winches pull them to the berth. After ice bars are taken out of the water, they are moved to a special chute and then transported to an ice-receiver, which is located close to the shore. This ice-receiver allows for production of needed amounts of cold water and air too.

Here is an example of how this technology can be used to solve a very serious problem of the Saudi Arabia government and businessmen: The problem is about the creation of a favorable microclimate in the places where pilgrims on the Haj are housed. A lot of projects have already been considered, but the answer has not been found yet. Gamid Khalidov's project allows for a way out. Cold air can be delivered along underground pipes to the outskirts of Mecca and then to the buildings and rooms where pilgrims stay. In addition, ice and cold air can be used to cool the meat of sacrificed animals. Calculations show that one or two ice-carrying vessels (of 50,000 tons displacement) will be enough to provide all that during the Haj period. It is possible to provide Saudi Arabian cities and settlements with water on the basis of the same layout.

Antarctica should have been made part of Russia