Antarctic ice drilling that would allow scientists to get to Lake Vostok (East) hidden for millions of years, will become one of the most important scientific events equal to the launch of the Large hadron collider. Scientist can only guess what can be found there. Pravda.Ru interviewed Andrey Balashev, a member of the Institute of molecular genetics, to find out what scientists expect to find. 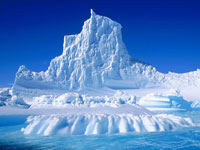 Lake Vostok is located under the surface of the central Antarctic ice sheet 4,000 meters (13,000 ft) thick. It has been isolated from the surrounding world for millions of years, so scientists expect to find a unique ecosystem that has no analogies on Earth.

Vostok is the largest of 140 subglacial lakes found under the surface of Antarctica. It covers the area of over 14,000 km2 (nearly 6,000 mi2). Despite the high pressure created by ice, the lake can be populated by microorganisms since the water is warm enough (approximately 50F) and oxygen concentration is high.

In order to obtain preliminary data about habitants of Lake Vostok, the scientists research other hidden bodies of water in Antarctica that are smaller and located under thinner layer of ice. Despite the fact that most of these bodies of water are covered with ice nine months of the year, there is still life in them.

Antonio Alcami, a Spanish scientist, and his colleagues from the National Research Council examined water samples from Antarctica's Limnopolar Lake and discovered several thousand species of microorganisms many of which were not previously known to science.

The findings included numerous viruses from 12 different families. Some of them were found and described for the first time.

Viruses are very important for closed ecosystems with only a few microbiological predators. They are capable of controlling the number of organisms and preventing their excess.

Unfortunately, these viruses are difficult to study in a lab since they do not grow in artificial conditions. However, the technology of allocating and decoding genome allowed scientists to learn many new facts about the biological role of viruses.

Spanish scientists think that the information about larger variety of species in the Antarctic region is the main result of their research. Multiple unique microorganisms prepared to survive in extreme conditions live in subglacial lakes.

Besides, the scientists discovered that population of viruses in Antarctic lakes depends on a season. As the lakes freeze, only the smallest viruses stay in their liquid areas while bigger species fall into anabiosis in thick ice.

In summer, when a part of the ice melts, large viruses come back to the lakes. Virtually, the lakes are different bodies of water with different water composition in summer and in winter.

The reasons for this are yet unknown, but it is suggested that the number of microweeds in water has something to do with it. Most likely, large viruses wake up when microorganisms start breeding. They infect them and fall asleep again.

Pravda.ru talked to Andrey Balashev, Doctor of Biological Science, a member of the Russian Institute of molecular genetics, to find out what is hidden under the Antarctic ice.

“Lake Vostok and other bodies of water located in Antarctic are unique areas of alien flora and fauna on Earth. Such ecosystems have been isolated from the rest of the world for a long time, and their evolution took its own unique path.

At the moment the drilling is suspended. The scientists are concerned that terrestrial microorganisms that would get into the closed ecosystem of the lake would kill everything alive.

At the same time, we have no idea what is hidden under the ice. It is obvious that the pressure of over 300 atmospheres leaves no opportunity for discovering large multi-celled creatures, but there are many microorganisms and viruses.

By the way, we cannot rule out that the viruses of Lake Vostok might be adaptable to life outside of the lake, but we might not be able to co-exist with them. The researchers have a lot to think about prior to resuming the drilling of the ice above Lake Vostok.”