Opposite phenomena were detected by satellites of the U.S. space agency. The study was the first to calculate the total thickness of sea ice in the Southern Ocean from space. NASA indicates that between 1978 and 2010, the extent of the Antarctic grew by 17 square kilometers each year but this growth rate is not as great as the decline in the Arctic. 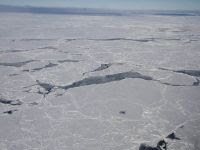 The satellites of the U.S. space agency showed two opposing phenomena to detect that the Arctic ice cover is decreasing, while the Antarctic is expanding, according to a study published on Tuesday (23rd).

"There was a general increase in the layer of sea ice in Antarctica, which is the opposite of what happens in the Arctic," said Claire Parkinson, a scientist at NASA's Goddard Center and lead author of the study.

NASA indicates that between 1978 and 2010, the extent of the Antarctic grew by 17 square kilometers each year, but "this growth rate is not as great as the decline in the Arctic," said the scientist, highlighting the difference in geography that the Earth's poles have.

According to study data, the extent of ice in the Arctic Ocean in September 2012 was 3.40 million square kilometers below average calculated from September 1979 to 2000, meaning that the area of ​​ice lost equals approximately twice the size of Alaska.

The Arctic Ocean is surrounded by North America, Greenland and Eurasia, large land masses that catch most of the ice that is concentrated, and withdraws cyclically according to the season.

However, a large part of the  most ancient ice disappeared in the past three decades and the covering of the summer ice was exposed to the dark water from the ocean, which absorbs sunlight and heats up, and which leads to the loss of more ice.

By contrast, Antarctica is a continent surrounded by open water that allows the sea ice to expand during the winter, but also offers less protection during the thawing season.

Most of the frozen Southern Ocean ice cover grows and retreats each year, giving way to little perennial sea ice in Antarctica.

The authors believe that the mixed pattern of ice growth and ice loss around the Southern Ocean could occur due to changes in atmospheric circulation.

"The weather does not change uniformly. Earth is very large and the expectation undoubtedly would be different if there were changes in the different regions of the world," Claire said, noting that the discovery does not disprove the theory of climate change.

According to NASA, this study, which used laser altimetry data from the ICESat satellite, is the first to calculate the thickness of sea ice in the Southern Ocean from space.