A huge meteorite rammed into Antarctica about 480,000 years ago. The meteorite weighed hundreds of thousands of tons. Debris and dust were scattered 3,000 kilometers around. This area is comparable to the size of a whole mainland. 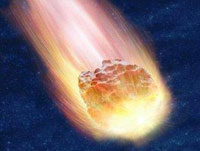 The blast, which occurred in the sky above Antarctica about 480,000 years ago, was similar to the Tunguska meteorite disaster of 1908.

The report presented at the conference for paleontology and the exploration of the moon in Texas unveiled the results of the analysis of spherical microparticles discovered in Antarctica.

The fine particles were found in the Transantarctic Mountains, in a region called Miller Butte.

“We've got similar material spread over a very large area. It's difficult to do that with any other mechanism. These events are tricky to spot after they happen. If you go to Tunguska now, you've really got your work cut out trying to find any trace of that event – and that was 1908. What makes [the] work so exciting is that it may give us a way of spotting these events in the geological record. If these spherules are the signature, we know what to look for in future,” Imperial College London expert Dr Phil Bland told the BBC.

A previous research found layers of meteorite dust, which appeared in Antarctica 430 and 480 thousand years ago. They were discovered during the drilling of the ice core in eastern Antarctica within the scope of EPICA-Dome C and Dome Fuji projects.

The analysis revealed high similarity between the debris found in the ice cores and the particles, discovered in Miller Butte. However, the distance between the two regions is about 3,000 kilometers. This may mean that the meteorite debris was scattered on a vast territory comparable to a whole mainland.

The mystery of the Tunguska meteorite disaster is still unveiled. Something enormous exploded in the area of the Podkamennaya Tunguska River in Russia’s Siberia on June 30, 1908. The square of the destruction area can be compared to the size of the city of Moscow today. However, there was nothing found on the site of the disaster: no traces of the impact and no debris of the space body.

Scientists believe that the extraterrestrial body that exploded in the Tunguska area was a stony meteorite that blew up and evaporated completely in the Earth’s atmosphere.

Events similar to the Tunguska catastrophe may occur every 500 or 1,000 years. Therefore, there are chances to find traces of several other mammoth catastrophes in the Antarctic ice core, scientists believe.