American scientists exploring volcanoes in Antarctica came to a conclusion that some of them may wake up from hibernation any day. If this happens, the most southern continent of the Earth will get very hot. While the eruptions are unlikely to melt the entire Antarctic ice sheet, they are quite capable of losing most of it in the ocean.

The glaciers of Antarctica are extremely stable. Over many millions of years, during the periods of climate warming on our planet, they have not retreated an inch and have not given up their position. Even now, when the Arctic is melting rapidly, at the opposite end of the Earth the cold "stability" is not only preserved, but even exhibits some growth in ice caps of the southernmost continent. However, according to geologists, everything can change in an instant - Antarctica is literally one step away from starting to melt. These drastic changes in weather may be caused by the Antarctic volcanoes that are ample in the area. 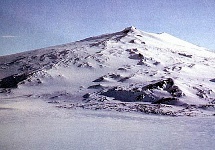 This alarming forecast was announced by a seismologist Amanda Lough and her colleagues at Washington University in St. Louis (USA). Before making this statement, the researchers have thoroughly studied the information from the seismic stations in the region of the continent known as Marie Byrd Land. This is a desert region of Antarctica that lies deep beneath the West Antarctic ice sheet. A mountain range with an interesting name the Executive Committee Range formed of a nearly straight line of volcanoes runs through it.

The further south a fire-breathing giant of this ridge is located, the younger it is. For instance, the age of Whitney peak is 13.2-13.7 million years, while a more southern giant Waesche has been formed in the last million years. The ridge is considered a turbulent area of the southern continent, as the earth's crust there is flattened by the West Antarctic Rift (a succession of giant rift valleys beneath the ice sheet). Geologists have found evidence that after glaciation of the mainland, the lava erupted from the underground magma pools due to the movement of the crustal blocks.

Nevertheless, for a long time none of the scientists knew whether the magma was still active beneath the Executive Committee Range. The situation was clarified by the seismic monitoring stations installed there in 2007-2010, and the data from them used by the group of Dr. Lough. As a result, the scientists saw that recently several small earthquakes took place there, some of which occurred in January-February of 2010, and others in March of 2011. These fluctuations in the Earth surface were very unusual because the earth trembled much more slowly than one would expect from crustal blocks that constantly grind the edges of each other while on the move,

Why were these earthquakes so sluggish? By doing some calculations, the researchers found that the waves that have caused the earthquakes originated at a depth of 25-40 km in the epicenter located approximately 55 km south of Mount Waesche. According to the geologists, this point is located in one of the areas of the underground volcanic activity. In that case, it continued its traditional offset along the ridge to the south. There was an assumption that the earthquakes were caused by the movement of magma deep beneath the volcanoes.

However, this can only mean one thing - the fire-breathing giants of the Executive Committee Range are not dormant but are waking up and will begin to actively erupt in the near future. The picture painted by the seismographs is very familiar to the scientists, as something similar is registered by the equipment in the area of active volcanoes in Hawaii. It is not ruled out that the same geological scenario where anomalously "slow" earthquakes are preceded by high volcanic activity is played out on the southern continent.

To test his hypothesis, Dr. Lough and her colleagues conducted a series of studies, including magnetic exploration and GPR survey of the area. Unfortunately, their predictions turned out to be accurate, and magmatic activity beneath the Executive Committee Range has been very high. For example, it was found that the area under these mountains has a slightly stronger magnetic field than the surrounding terrain. In addition, the GPR survey revealed a layer of volcanic ash in the surrounding ice ridge. Most likely, these are the traces of the last eruption of Waesche that occurred approximately eight thousand years ago (from a geological point of view very recently). Although the traces of the later eruptions were not found, the researchers suggested that the volcano can wake up at any moment, because the magma underneath cannot calm down.

If the assumptions of the scientists from the group of Dr. Lough are correct, what will happen to the Antarctic ice if volcanoes in Marie Byrd Land are still awake? Since the center of the current volcanic activity is covered with a glacier one kilometer thick, it could be melted completely only by an exceptionally powerful eruption. Likely, as the falling snow constantly increases the mass of the glacier, the shield constantly slides towards the ocean. Having melted the base of the ice mass, the eruption will give it speed and will simply dump the entire mass of ice into the ocean.

As a result of such an event, a significant part of the ice will melt, and in a short time it can significantly increase the level of the oceans. Furthermore, since there is no guarantee that the eruption of the Executive Committee Range volcanoes will not start similar phenomena in other mountain ranges (for example, on the Kamchatka Peninsula one eruption immediately activates another two or three), it is possible that most of the Antarctic ice will be in the ocean. In this case, the jump in the sea level on the entire planet will be fast and sharp. According to the calculations of the scientists, in just a few years the world oceans level will jump by one meter.

However, not all colleagues of the scientists from Dr. Lough's group support this pessimistic scenario. A glaciologist Robert Bindschadler of NASA Goddard Space Flight center believes that the eruptions, even the strongest ones, are unlikely to dump the entire ice sheet into the ocean, most likely, they will only slightly accelerate sliding. He expects that this slight "acceleration" will have no impact on the level of the oceans.