The brutal killing of the Russian Ambassador to Turkey Andrei Karlov in Ankara was committed the day when Russian President Putin was going to attend "Woe from Wit" at Moscow's Maly Theater - the spectacle based on the great play by Alexander Griboyedov. Griboyedov was a writer, musician and diplomat of the highest rank, who was killed in Persia. It happened on January 30, 1829, when Islamic fanatics attacked the Russian Embassy in Tehran, where ambassador Griboyedov was hiding several Armenians, saving them from slaughter. 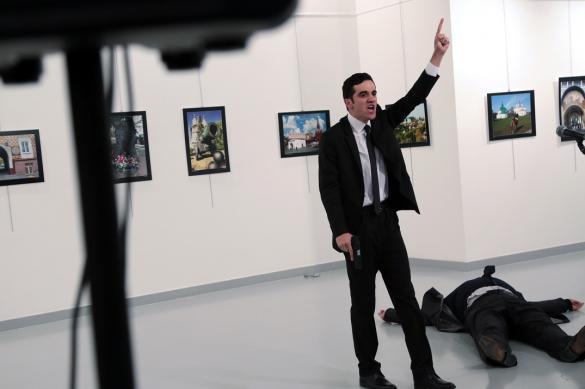 The frightened Shah of Persia, in order to avoid violent response from the Russian Empire, sent his grandson, along with fabulously expensive gifts, to Saint-Petersburg. The renowned "Shah" diamond that used to adorn the throne of Great Moguls, and still appears to be one of the most important relics of the Diamond Fund of Russia, turned out to be a sufficient redemptive argument for the tsar. When accepting the gifts along with apologies from the shah, tsar Nicholas I told the grandson of the Persian shah that the unfortunate incident in Tehran would sink into oblivion. That was a tsarist way to turn a blind eye on the blood of Griboyedov, 37 other Russian diplomats and Cossacks that guarded the embassy. As a result, the attack on the Russian embassy in Teheran led to no consequences for Persia.

Two more Russian ambassadors were killed at the dawn of the Soviet power. Vaclav Vorovsky, the head of the embassy in Italy, was killed in 1923 in Switzerland. The court in Lausanne acquitted the suspect and his accomplice too easily and quickly and declared the killing of the diplomat an act of revenge. The young Soviet republic broke off diplomatic relations with Switzerland for 23 years. Four years later, in 1927,  Russian Ambassador to Poland, Petro Voykov, was killed.

To avenge Voykov's killing, the Soviet Union responded with terror: 20 representatives of Russian aristocratic families were arrested and executed without trial.

The grim symbolism of violent events that occurred to Russian ambassadors, the consequences of those murders, can not but evoke certain associations. Today, Russia no longer trades the lives of her diplomats, nor does she resort to terror to respond to terror. The Turks are well aware of it. Turkish President Erdogan called his Russian counterpart nearly immediately after the attack on the Russian ambassador in Ankara. Erdogan informed Putin about his personal control over the investigation and promised to strengthen the protection of the Russian diplomatic mission in Turkey.

Incomplete trust, understatements and outright suspicion remain dominant in the Russian-Turkish relations. The killing of Andrei Karlov in Ankara will only make matters worse. The tragic event in Ankara have also unveiled huge flaws in the security system that ensures protection of Russian diplomats in the warring state, where terrorist attacks occur regularly.

Whichever goals the killer, Mevlut Mert Altintas, a former policeman, may have had, Turkish official circles and the media rushed to declare him a member of the semi-mythical terrorist organization FETO. This is what Turkish President Erdogan calls almost all of his internal and external enemies, attributing them all to supporters of his notorious political opponent Fethullah Gülen. However, a court in Istanbul had earlier found that there was no court decision to confirm the existence of an armed terrorist organization called FETO. Yet, the sitting Turkish administration has been conducting a real witch hunt under the guise of the struggle against the semi-mythical organization for three years. Thousands of Erdogan's adversaries still remain in Turkish jails - those people are accused of either plotting the coup in Turkey or simply supporting Gülen.

All observers unanimously stated that the main purpose of the killing of the Russian diplomat was an attempt to strike an extremely painful and heavy blow to the slow recovery of the Russian-Turkish relations. Of course, the goal has been achieved, and much will now depend on Erdogan. In the first seconds after the fatal shots, the killer clearly shouted that he came to take revenge for Russian actions in Syria. However, the Turkish President, without doubting for a moment, immediately referred to his favourite  tale of Fethullah Gülen, who is hiding in the USA.

Recep Erdogan has recently announced real reasons of his interference in the Syrian  conflict. The Turkish president suddenly announced his intention to remove his personal enemy - Bashar Assad - from power in Syria. Needless to say that this plan comes contrary to Russia's goals in the country. One shall assume that it will be very hard for Erdogan to retrieve Putin's confidence.

On December 20, during the trilateral meeting between Russian, Iranian and Turkish ministers of defence and foreign affairs, Sergei Lavrov, the head of the Russian Foreign Affairs Ministry, stated that Russia, Iran and Turkey were most effective forces for the resolution of the crisis in Syria. If the Turks do not find the courage to admit that all traces of terror in the Middle East lead to the Islamic quasi state (banned in Russia), but continue to refer to Gülen instead, there will be no further progress made between the two countries.

On December 19, Turkey put another bloody sacrifice on the altar of terrorism of the Middle East, and Turkey did it at Russia's expense, because Turkey has been playing up to supporters of Mideastern terrorism for many years. Obviously, Russia will continue trying to resolve the conflict in Syria and develop relations with Turkey at the same time. However, the current stance of the Turkish administration to admit errors in both domestic and foreign policy is not likely to bring any results.

Assassinations and attacks on ambassadors in the XXI century:

July 2, 2005:  Egyptian Ambassador to Iraq, Ihab al-Sherif, was kidnapped in Baghdad. His body has never been found.

August 20, 2006:  Russian Ambassador to Kenya Valery Yegoshkin was attacked. The diplomat suffered a stab wound, but subsequently returned to his diplomatic duties.

September 20, 2008: Czech Ambassador to Pakistan Ivo Zhdyarek fell a victim to a terrorist attack in Islamabad.

July 27, 2012: Venezuelan Ambassador to Kenya, Olga Fonseca, was strangled in Nairobi. The incident was filed as a homicide resulting from domestic violence.

September 12, 2012: US Ambassador to Libya Christopher Stevens and three American consulate officers were killed in Benghazi.