Thank God, the war is not hot yet. All provocations that we can witness these days have the purpose to shape public opinion in the world. 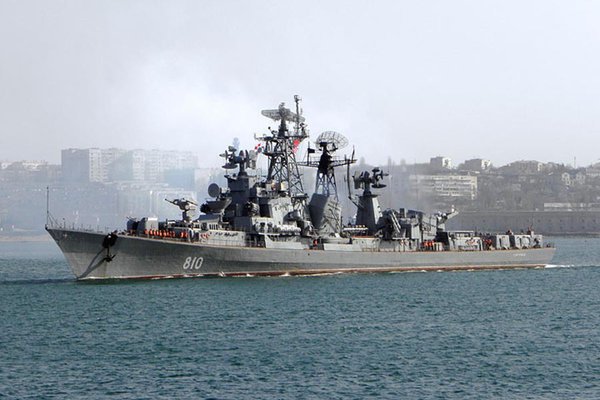 The recent story with Russia's Smetlivy warship is another proof of that. Russian officials want Russia to be the country that does nothing but makes excuses. Here is how it happens.

A Turkish boat started approaching a Russian warship in the northern part of the Aegean Sea. The Turkish vessel was showing no reaction to internationally accepted norms of alert that the Smetlivy was showing. The fishing boat did not establish a radio contact with Russian sailors, nor did it respond to specific visual signals, such as  semaphore and flares.

The Smetlivy opened warning fire from small arms at the Turkish boat as the latter was 600 meters from the Russian warship. Immediately after that, the Turkish ship abruptly changed the course of navigation and passed the Smetlivy by at a distance of 540 meters without establishing a contact with the Russians.

The Russian Defense Ministry was acting in a way as it would act five or ten years ago. The press office of the Ministry immediately reported the incident and summoned the Turkish military attache. They swallowed the bait, so to speak.

A little bit later, CNN Turkey quoted the owner of the Turkish fishing boat, Muzaffer Gecici as saying: "We did not approach the Russian ship closer than one nautical mile or 1.8 km. The Smetlivy was not moving, and we were not shot at. Even if the fire was opened, no one heard that," the man said. Gecici, the owner of a fishing company, also said that his 46-meter seiner was fully equipped with necessary equipment. According to him, the video materials from surveillance cameras of the ship were handed over to the Coast Guard.

Doesn't it look remarkably similar to the incident with the Su-24? Both then and now, journalists had been prepared in advance to cover the Turkish position. In case of the Su-24 bomber, they knew where and when the incident was going to occur. In the most recent incident, the owner of the Turkish boat delivered CCTV recordings to the Coast Guard and talked to CNN Turkey in just a few hours. Needless to say that the world media will fall for pictures and videos, rather than for plain words.

Afterwards, Russia will provide most compelling evidence in the form of satellite imagery and recordings from Smetlivy's surveillance cameras. However, no one will either see of hear that, just as it happened when Russia provided its evidence to prove that the Su-24 was shot down above the territory of Syria by the Turkish fighter jet that invaded Syrian airspace.

Everything that happens after is nothing but excuses that no one is interested in. As a result, the world media is already reporting that Russia is trying to escalate the situation, that the Russian Ministry of Defense was being hysterical in an attempt to  to blacken "peace-loving Erdogan."

I have an important question about this incident.

Why does the Russian Defense Ministry make statements "without pictures and videos" knowing about possible provocations in advance?

Again, this is an information war, in which Erdogan took over the role of an outspoken provocateur. This is exactly the reason why the European Union allocates billions of dollars in tranches and promises EU membership to Turkey despite the occupation of the northern part of Cyprus that is formally a member of the European Union. The US assists with weapons.

Russia does not need to show quick response to provocations. Russia needs to be able to provide the evidence that will look and sound convincing in the eyes of superior information forces of the enemy that is trying to draw Russia into a military conflict that would exhaust Russia economically.

Against this background, Russia should develop an effective communication strategy for all our departments. I find it hard to understand why relevant committees of the Public Chamber and the State Duma do not even try to discuss this issue.