Turkish President Recep Tayyip Erdogan stated that Ankara would see as aggression a situation, in which a Turkish warplane would be shot down by Russian S-400 anti-aircraft missile system should Turkey violate Syrian airspace. 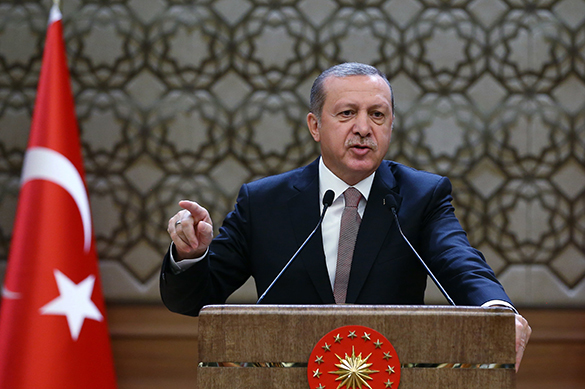 In an interview with US broadcaster CNN, when asked how Ankara would react if Russia shot down a Turkish warplane in Syrian airspace, Erdogan said that Turkey did not want to see any escalation region. "We do not want to be a part of it, but those who take the side of Syria and promote the growth of tension, I think, they are responsible for it," Erdogan said.

According to the Turkish president, such an incident is possible, and "it will make us (Turkey) take further action that are not to be discussed, of course. "Of course, it would be an act of aggression against our right to sovereignty, and it is natural for a state to protect this right of course," he added.

Earlier, Erdogan said that Ankara was not going to apologize for shooting down the Russian Su-24. According to Ankara, the Turkish side found out that the downed aircraft was a Russian only after  Russia declared so.

Thus, the Turkish President has officially declared that its warplanes can fly into Syria. According to Erdogan, there will be war, should incidents similar to the downing of the Su-24 reoccur.

Russian President Vladimir Putin stated on Thursday that he was very much surprised with Turkey's attack on the Russian bomber jet.

"It did not even believe that we could be struck by a party that we considered to be our ally. We considered Turkey to be a friendly country," Putin said.