Why does Russia call NATO countries her partners?

NATO continues putting pressure on Russia. During the NATO summit in Warsaw, the leaders of NATO member countries gathered in the hall where a declaration on the establishment of the Warsaw Pact was signed 61 years ago. This fact is also an act of pressure to emphasize Russia's defeat in the Cold War. How can Russia "please" her Western partners in return? 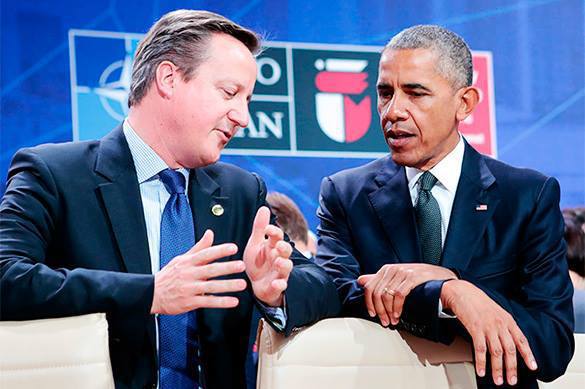 In its final declaration, it was stated that Russia continues to deliberately destabilize the east of Ukraine in violation of Minsk agreements and international law. NATO believes that Russia continues supplying weapons, military hardware and manpower to the southeast of Ukraine thus supporting illegal armed groups in the conflict. The declaration also states that Russia is fully responsible for the discrimination against Crimean Tatars and other representatives of local communities.

The declaration puts Russia on a par with Daesh terrorists, as Russia's actions in Ukraine supposedly pose a threat to Europe's security.

Predictably, NATO has shown a powerful ideological support to the fascist regime in Ukraine. The alliance even recommends implementing the Minsk agreement in accordance with the Ukrainian scenario: to create a "safe environment" before holding elections in the Donbas under Ukrainian laws and in accordance with OSCE standards.

Judging by the ongoing hostilities and bombings on the demarcation line, the "safe environment" in the Donbas will never materialize.

Ukraine has thus received strong ideological nourishment along with promises to bring the Ukrainian army up to NATO standards. One shall assume that this could be a veiled invitation to the alliance. Nobody has abolished the prospect of Ukraine's NATO membership, voiced at the Bucharest summit in 2008.

To "contain" Russia in Europe, Poland, Estonia, Lithuania and Latvia, it was decided to deploy battalions of soldiers - Americans, Canadians, Germans and British ones - in these countries. It was  strongly emphasized that these 4,000 "brave" soldiers would stand to confront 30,000 "hostile" Russians. Firstly, the Russian contingent is deployed only on the Russian sovereign territory. Secondly, NATO's Rapid Response forces in Europe count more than 40,000 people.

Aegis-equipped ships near Spain, interceptors in Romania and radar systems in Turkey will operate as one system under the command and control of NATO. All these offensive preparations are wrapped in the rhetoric of the "defensive alliance."

It is not clear in this context why Russian diplomats continue calling for compromises. Why does Russia call "partners" the countries that strike Russia out from the list of their partners? NATO and Russia are not strategic partners, Jens Stoltenberg said. He believes that there is no cold war between Russia and NATO, but this is hypocrisy. Russia and NATO have been in a state of cold war for a long time already. One may hope that Putin understands this too. Prior to the summit in Warsaw, the Russian president had telephone conversations with members of the Norman Quartet and US President Obama. It was said that Russia was aware of Ukraine's intentions to solve the crisis in the Donbas by force. Most likely, the Russian president asked his foreign colleagues to prevent such attempts from happening.

NATO is Russia's enemy - let's face it. Mikhail Gorbachev, a popular figure in the West, is perfectly aware of that. "All the rhetoric in Warsaw screams of the desire to declare war on Russia. They only talk about defense, but they actually prepare offensive actions," Gorbachev said.

The West needs Ukraine as an ulcer

Russia's goal is to respond adequately to all the preparations that the West has been making recently. The deployment of a Russian military base in a friendly country near the borders of the USA could be a good move to make.

"Now, when they accuse Russia of aggression, they forget about fundamental principles of the definition of military threat," Konstantin Sokolov, an expert on geopolitics said in an interview with Pravda.Ru.

"After all, both Western and Russian experts clearly understand the political goal of the war that should be waged against Russia. The West wants to seize Russian resources, our vast territories rich with huge farmlands, forests, water resources, etc. All this was established a long time ago. Yet, no one can explain the reasons, for which Russia would need to seize Europe.

"As for Ukraine, they are trying to prove it to us that Russia is waging a war there. At the same time, they do not notice NATO's participation in actions to topple the Ukrainian government and unleash a war in the southeast of Ukraine. The West needs Ukraine as an ulcer that always remains a source of infection, so the war in Ukraine will last permanently," the expert told Pravda.Ru