NATO summit is opening on July 8 in Warsaw to discuss the "Russian threat." The decisions that are to be made during the summit in Warsaw will come contrary to the agreements that Russia and NATO achieved earlier, breaking the entire logic of international relations, experts say. 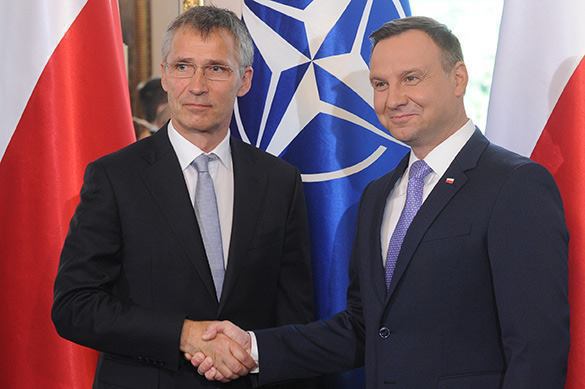 The decisions of the NATO summit in Warsaw will challenge not only Russia, but the entire international community, Deputy Chairman of the State Duma Committee for Defense, Viktor Vodolatsky, told the Izvestia newspaper.

"The US has been taking efforts to strengthen military tensions around Russian borders. In this respect, the forthcoming deployment of four battalions in Poland and in the Baltic States shows that the established practice of international relations means nothing to the Americans. They continue building the unipolar world," said Victor Vodolatsky.

According to him, Russia will have to respond to such actions by relocating a part of its troops from southern and eastern to  western borders, including in the area of ​​the Kaliningrad enclave.

"Of course, the NATO summit in Warsaw, which opens today, is, for the most part, anti-Russian," - expert in military and legal issues of NATO armies, Alexander Zimovski told Zvezda. "Suffice it to look at the agenda of the summit to see that first priority attention will be given to Russia. In a nutshell, NATO insists on its right to indefinitely extend the sphere of influence of the alliance. At the same time, NATO strongly refuses to recognize Russia's any, even hypothetical rights, to protect the Russian sphere of influence. NATO does not want to hear anything about the expansion of the Russian zone of influence," he added.

Still, Moscow does not intend to engage in a new arms race. The Russian Federation will review the decisions that will be taken at the summit before notifying the alliance of its position during the upcoming meeting of the NATO-Russia Council on July 13th.

As many as 65 delegations from 28 NATO countries and 26 partner countries, as well as representatives of the UN, EU, World Bank and NATO headquarters arrived to participate in the two-day NATO summit in the Polish capital. In total, the event brings together about 2,500 participants.

Official spokesman for the Russian president, Dmitry Peskov, stated that Moscow saw a "rational kernel" in the words from NATO Secretary General Jens Stoltenberg, who earlier called to maintain  contacts with Russia.

"We are trying to look for a rational kernel as well, and we can see it, for example, in today's statements from Mr Stoltenberg about the need to maintain contacts with Russia, and about the absence of a direct threat from Russia," Peskov said.

During his speech on Friday, Stoltenberg stressed out that NATO would continue to seek dialogue with Moscow. According to him, NATO does not seek either confrontation or another Cold War with Russia.

Peskov said that Moscow is watching the NATO summit closely. "This is extremely important. Of course, we would like to hope that common sense and political will to avoid confrontation will prevail," Putin's spokesman said.

"It is absurd to speak about the threat from Russia, when dozens of people are killed in the center of Europe and hundreds are killed in the Middle East every day. One has to be an absolutely short-sighted organization to put emphasis like that," said Peskov. According to him, the alliance will not be able to find common ground for cooperation with Moscow if it looks for the image of the enemy and promotes anti-Russian hysteria and Russophobia, and then, based on the emotional background, deploys new military bases closer to Russia's borders."

According to the Kremlin, the field for interaction between the parties will appear if they concentrate their work on combating real threats, such as terrorism. "If at this point Russia's outlook clearly and consistently coincides with that of NATO, there will be a wide field for cooperation," concluded Peskov.