For Syria! For Assad!

Well-known Syrian journalist, lawyer and political analyst Anas Mohsen gave an exclusive interview to Pravda.Ru. We sat down with Mr. Mohsen to talk about the five-year war of the West against Syria, Bashar Assad's political rating and sponsors of the so-called Syrian opposition that settles in Istanbul and European capitals. 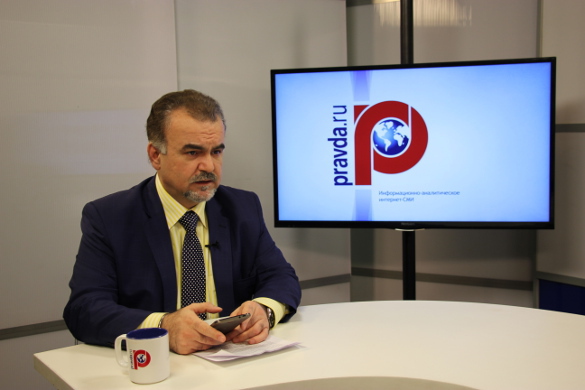 "The heroic people of Syria have been fighting against international intervention for five years already, although Western politicians predicted that the rebellious people would topple the Assad regime in two weeks. What are the main challenges that the Syrians face in showing resistance to aggression?"

"Indeed, the West has failed to topple Assad. The Syrian president has not left and he is getting stronger and stronger. I can say for sure that more than 70 percent Syrians support him now, and his rating is growing."

"Yes, they do. We are witnessing a wave of recognition. Bashar al-Assad is not going anywhere, and let the Syrian people decide his fate. Of course, the country is dealing with great problems. Fifty percent of infrastructure has been destroyed, but still, there are places, where people can grow and harvest crops.

"Militarily, the Syrian people have been fighting with honor and dignity for five years, but it is only a political process that can stop the war. One should destroy terrorists before negotiations with opposition can be started."

"Those who listen to Western propaganda think that Syria is an autocracy, even a dictatorship. There are twelve parties in the Syrian parliament, aren't there?"

"Yes, there are twelve parties and multiple independent candidates. The government is based on the coalition - there is opposition in the government too. Bashar al-Assad is constantly in contact with various parties."

"Bashar al-Assad talks about the need for reforms all the time. The president, the government want reforms, but rebels took up arms to fight for power. What happens in the nation-building in Syria?"

"President Bashar Assad has significantly changed the economic and political life in Syria. For example, during the 1990s, it was impossible for entrepreneurs to import goods, political parties could not be created either. All of that became possible when Assad came to power. Syria was changing fast. Many Syrians could travel abroad, tourism was developing, the level of wages in Syria was high. However, the West wanted to destroy Syria and stop its development. You can see the result for yourself: five years of war. Yet, the people have been able to stand all that for five years, and the government pays wages to doctors, teachers and civil servants who stay on the ISIS-controlled territory.

"Now, unfortunately, everything has worsened. The Syrian currency exchange rate is constantly declining. This is a serious blow to the economy. But I can say with confidence that the Syrians do not pay attention to that. The main thing is to win."

"Are parliamentary elections going to take place in Syria in March 2016?

"They  will take place, if nothing extraordinary happens.  At the last conference in Vienna, it was said that one needs to create a coalition government that will organize parliamentary elections. Everyone wants Syria to become a presidential, rather than a parliamentary  republic, where the president will be elected by the parliament. The Syrians do not need a parliamentary republic.

"Everyone wants to elect the president directly. Strangely enough, the Baath Party gained 55 percent - this is a good percentage. The second place belongs to the Syrian National Socialist Party. I think that it will collect about 15-20 percent. The third place goes to moderate Islamists.

It is also planned to create a new Constitution, but I think that there will not be a big difference with the current Constitution. Experience has shown that those who call themselves opposition in the beginning of the Syrian crisis only want to get rid of the law. They are common criminals. All they want is to seize power. There is this supposedly ordinary opposition activist Bassam Jaara, who is based in London. He was a high-ranking official in the Syrian government and had a lot of authority. He was stealing as much as he could, and now he is a member of the Syrian opposition. There are other people from the Syrian authorities who joined the rebellion - they are generals, heads of state-run companies and ministers. They are now based mostly in Istanbul. They are new Syrian oligarchs, who have earned huge money on the war.

"Those people are simply traitors who receive handouts from our enemies. They destroy Syria and kill people for their own self-interest. The funding comes from Saudi Arabia, Qatar, from Erdogan, of course. The war will continue until the funding of those policy-makers - terrorists, in fact, - is stopped. And we will fight them to the end."

"Does Bashar al-Assad see himself as the Baath party leader or the president of the Syrians?"