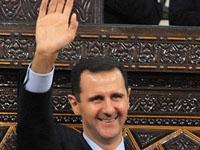 The situation around Syria continues to be in the spotlight of the politicians and the media. In recent days the situation in the country has sharply deteriorated. The tone of the comments in various western media outlets is nearly the same: they are blaming President Bashar Assad. At some point Milosevic and Gaddafi were subject to similar attacks by the Western media. Would Syria be subject to the same scenario as Yugoslavia and Libya?

Today it was announced that French Foreign Minister Alain Juppe was going to make a tough UN Security Council resolution condemning al-Assad, despite the position of Russia that has a veto power. "We know that Russia would likely veto any resolution on Syria. If they do opt for a veto, they will take on responsibility. If they see that the resolution receives11 votes, they may change their minds. We are willing to take a risk," said Juppe.

The comments of the Western publications made against Syria follow the same tendency. For example, British BBC, talking about the shooting of the government troops by unidentified gunmen, said that the soldiers were moving "to help people." British journalists readily replicated this theory, saying that the soldiers wanted to move to the opposition and were shot by the Assad regime police. Of course, they did not bother to provide any proof of that.

With the same zeal western media picked up the theory of the massacre at the Israeli-Syrian border on June 5, suggested by the Israeli authorities. Then IDF soldiers shot Palestinian demonstrators trying to break into Israel. According to them, by the protests of the Palestinians who remembered the anniversary of the beginning of the Six-Day War in 1967, Bashar al-Assad wanted to distract the world's attention from the problems in his country.

The Wall Street Journal seemed to have a slightly different theory. The paper reported that it was the second outbreak of violence in three weeks on the border that has remained relatively quiet for more than three decades, despite the "cold war" between the two countries. "Inspired by popular domestic demonstrations around the Arab world, pro-Palestinian protesters in Syria and Lebanon are seeking to challenge Israeli forces along the sensitive border region," the paper reported.

However, further everything returned to normal. The newspaper provided a point of view of the Israeli government that Bashar Assad deliberately did not respond to all the warnings from Tel Aviv on the possible interventions of Palestinians at the border. An expert on the protection of the rights of the Syrians said that Syria had an opportunity but no desire to take the Palestinian protests under control.

In turn, the British newspaper The Guardian made an attempt to analyze the causes of the deaths of 120 Syrian military in the north-west of the country. It sets out the official theory of the Syrian authorities that a thorough investigation into the tragedy is being carried out and those responsible would be punished. But all subsequent comments are reduced to one thing again: Bashar Assad is to blame.

"Activists and analysts suggested members of the security forces may have been killed but said that claims the killings had been carried out by armed gangs were intended to justify the crackdown. They pointed out that armed gangs never roamed Syria before the Arab spring."

And further: "Many say the Syrian regime is trying to provoke predominantly peaceful protesters to fight back to justify the state's crackdown."

The Austrian newspaper Die Presse offered the story of the involvement of the Syrian leadership to break through the boundaries in its pure form. "The Syrian leadership is not interested in restraining the protesters. On the one hand, Assad is now busy with domestic policy issues, on the other, he benefits from the unrest on the Syrian-Israeli border: they divert public attention from the protests against the current government", the paper quotes an Israeli expert on Syria.

On its part, the Spanish newspaper El Pais has openly called Western politicians to increase pressure on the Syrian authorities. "It is unlikely that the symbolic sanctions imposed by Obama and the EU will force the Syrian despot to refuse shelling settlements with their tanks, refuse to conduct massacres. Washington, that has the ability to change the course, continues to believe in the utopian idea that the regime may ultimately opt for reforms," the publication states.

"The UN Security Council, the U.S. and the EU must by all means support the emerging opposition front that Damascus attempted to stifle, declaring an amnesty for political prisoners," wrote El Pais. The newspaper called on the international community to do everything to not let Bashar al-Assad "to deprive the Syrians of hope."

French Canadian newspaper Centpapiers reported that the West had many more reasons to punish Syria than Libya. "The events in Syria are a litmus test which facilitates identification of the hypocrisy of the West. Its only desire was the removal of Gaddafi from the stage. At the same time, the West only issues accusations against Syria, both verbal and written. There is increasingly more evidence against the Syrian regime, while there is none against Libya," the newspaper reported.

It is worth mentioning that one can rarely see similar stories about Yemeni President Ali Abdallah Saleh or the Emir of Bahrain Hamad bin Isa Al Khalifa on the pages of the Western press. However, equal amount of blood was shed in these countries. In contrast to Bashar Assad, the two leaders were always the allies of the West. Therefore, they are not threatened by sanctions, and not blamed for every mortal sin.

In the past, Western reporters conducted such a coordinated attack only against two people: Slobodan Milosevic and Muammar Gaddafi. Even Saddam Hussein seemed to get more attention. There is no need to remind what followed the attack information in the cases of Yugoslavia and Libya. Is the West seeking military intervention in the case of Syria?