Syrians took part in the referendum for the draft of the new Constitution of the country on February 26. The document is expected to become the basis for future reforms, and elections. Many experts doubt whether it could ease the situation in the country. 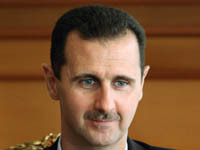 However, the West expressed its concerns in connection with the draft Constitution. Strangely enough, many of those, who do not support the change of the ruling regime in Syria, also criticized the new Constitution.

"Even though our Committee of the National Unity of Syria supports Bashar Assad's reforms, I will personally vote against the draft of the Constitution. This document represents the legalized power of the city bourgeoisie. It also opens the road to the triumph for Muslim Brotherhood. The support from the secular population is important for the authorities in the first place. However, here we can see the refusal from the predominance of the Baath party (the Party of the Arab Socialist Revival). This is a huge concession to be made to Islamic radicals."

"But Assad said that clearly that he was not going to let anyone speculating on ethnic and religious issues get into the parliament."

"Islamists won the elections in Tunisia and Turkey. This may happen in Syria too. Muslim Brotherhood can run for the elections freely. The movement is banned, but on one can stop them from running under the guise of a different name. Furthermore, the draft Constitution does not say that Syria is a secular state. They can put down their most radical slogans for a while. This is a very organized movement, and one shouldn't underestimate them."

"The new document came as an unpleasant surprise for the Christians too. The new constitution says that only a Muslim individual can serve as the president of Syria. Why couldn't this be available to any Syrian national of any religion and confession? Many Syrians do not support such games. We want a secular state."

"What is the role of the president in the new Constitution?"

"The new amendments give Bashar Assad the power, which his father didn't have. Assad gets absolute control of the judicial authorities, for example. The president will have the right to appoint and dismiss the head of the Constitutional Court. The judicial power will thus belong to the president, who serves as the head of the executive power.

"Thus, if the new Constitution is approved, Bashar Assad will become like a pharaoh. He will be able to veto any decision, including democratic reforms, which the Syrians are expecting so impatiently. Independent Syrian media, the parliamentary control of state officials and independent courts - all of that is only a dream."

"Even Bashar Assad's followers are concerned about the permissiveness of special services. Is this issue reflected in the new Constitution?"

"No, it is not. Special services still act as the right hand of the president. It's impossible to imagine that someone can cut off that hand. However, he cannot control them totally. Syrian special agents may often be involved in illegal arms sales. Syria produces its own food and fuel. However, the country seriously suffers from the shortage of that already. They may not have electricity for hours now. Special services steal fuel and send it to Lebanon or Turkey. Officials buy flour and then resell it at higher prices.

"Corruption is everywhere. One may assume that the situation with corruption will get even worse in the event the power in the country becomes even more centralized. One should not play these games with the Constitution. The Syrian administration aggravates the situation even worse."