The West wants to topple Syria's Assad at all costs 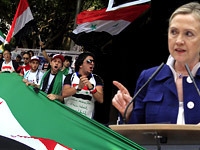 Syrian President Bashar Assad is not supposed to stay at power in the country, Western top officials say. US Secretary of State Hillary Clinton stated that Bashar al-Assad was "not indispensable." "We have absolutely nothing invested in him... remaining in power," she said. "From our perspective, he has lost legitimacy. Our goal is to see that the will of the Syrian people for a democratic transformation occurs," she added.

Clinton released the statement soon after the US Embassy and the residence of US Ambassador Robert Ford in Damascus were attacked by crowds of Syrian protesters. The riots occurred after the US Ambassador visited the city of Hama to support "opposition protests." The Syrian officials said that the US was trying to interfere into internal affairs of the country.

The French ambassador also took part in the trip to the city. After the trip, Bernard Volero, an official spokesman for the French Foreign Ministry, released the following statement: "France reminds Syria that it is not with such illegal methods that the authorities in Damascus will turn the attention away from the fundamental problem, which is to stop the repression of the Syrian population and to launch democratic reform."

The Syrian authorities stated that the USA is persistently trying to unleash the war against their country. Leonid Ivashov, the President of the Academy of Geopolitical Sciences, who has just returned from Syria, told Pravda.Ru that the West is seriously intended to create a serious provocation to be able to attack the country.

"I personally met Syrian President Bashar Assad to discuss the situation in the country. The situation in the city of Hama was exacerbated artificially. The Syrian government managed to change the situation, and the protests of the so-called opposition receded. Then the events in Hama took place. The Syrian authorities were right when they said that the USA and France were interfering into the affairs of the sovereign country. Just try to imagine this: rioters are trying to seize power somewhere, but ambassadors of the leading countries of the West encourage them for more.

"Like I said, the situation in Syria has improved recently. I'd also like to say that it became partially possible owing to my efforts. I took part in the joint session of Syria's leaders, including the president. During the session, I put forward my suggestions on how to improve the situation in the country.

"I particularly said that it could be possible to move the standoff to the camp of the enemy. Most of those who protest against Assad, want him to leave. They do not offer any constructive solutions. If so, one could sow the seeds of discord among the protesters. If there's no Assad, then who is going to take his place? This will set off struggle inside opposition.

"It could also be possible to discuss the new Constitution. The people of Syria would have an opportunity to take part in this global reform. If, for example, it goes about the educational system, teachers and professors would participate, and so on.

"Assad is dealing with the pressure from the old guard of his father. Those people do not want to change anything about their position; they don't want to lose their power and influence. Let's take the situation with the state security system, for example. During the times of Hafez Assad, the system obtained incredible power. The same is about the police.

"I asked them what kind of protests they had to deal with in the country. They told me that they were mostly meetings with up to 70,000 people participating. They would arrest some 200 people from the crowd and baton them. They also told me that they never arrested any organizers. I then asked them why they had to do that if Al-Jazeera was covering all that as violent actions committed against the Syrian population.

"I told the Syrian administration that such actions can only add more radicalism to the opposition. The local opposition is ready for a dialogue, taking into consideration the fact that the majority of Syrians do not support them, with few exceptions, as it happened in several villages in the north-west of the country.

"Syria is in serious danger, so they have to do something to change their state machine. The USA and its allies will not let Assad stabilize the situation in the country because they would have to acknowledge their defeat otherwise. They will do their best to topple Assad. They may initiate some massacre, which the USA will use to launch aggression against Syria without UN sanctions," Leonid Ivashov concluded.