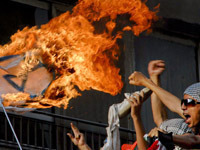 The rallies of the opposition against President Bashar al-Assad are ongoing in Syria. Now the important events are unfolding in Hama, where the American ambassador to Syria came to support the Islamists. The information war against the country continues. Russian Arabist Ankhara Kochneva stationed in Syria talked about the situation in the country in an interview with Pravda.ru.

"According to "Al Jazeera", "Al Arabiya" and the western media something terrible is happening in Syria. They say that Assad is physically eliminating the opposition that is only demanding reforms and improvement of life."

"This is a monstrous lie, a consequence of the continuation of the information war against Syria, and it happens in many ways similar to how it happened in Libya. The main goal is to demonize the regime in every way. This is done in such a way that even Goebbels propaganda pales in comparison. Take for example a recent live show of the meeting of the opposition leaders in the Semiramis. They did demand reforms, but under the slogan "We are for the President", while maintaining the existing system. However, Western and pro-Western media translated it the following way: "The opposition demands Assad to leave." This is how the information about the events in the country is presented.

"It involves a lot of interests. First and foremost, Syria, according to the West and Saudi Arabia, is guilty of being an ally of Iran that goes its own way and refuses to dance to their tune. We must not forget that Syria is a huge market and there is a power in the world that would like to bring it under its control. What do I mean by this? For example, self-sufficiency of Syria in terms of food security. Why not to do it the same way it happened in 1990 with Russia, when it became dependent, in particular, in terms of food supply. Taking control of the supply of certain products in a rather large country like Syria would be a great success for the West.

"What about Israel? Judging by the reaction of a number of Israeli media, Tel Aviv is not interested in the destabilization of Syria."

"On the surface, its position looks much softer than the position of the West or the Arab Gulf monarchies. One may get this impression when reading a newspaper in Israel. But it is misleading. The fact is that not everyone knows a characteristic feature of Israel's presentation of information for external and internal use. The information for the external presentation gets translated into other languages. In this case, we can read headlines like "Without Assad Syria is threatened by destabilization dangerous for Israel." Yet again, this is a purely external aspect. Actually, one can observe accumulation of the Israeli troops at the Syrian border and refinement of the war against Syria.

Israel really needs destabilization in the country. This is not only about Iran but also in an effort to immerse Syria in its own problems. The calculation is based on the fact that in a state of instability, it will cease to play a significant role in the Middle East and hinder the implementation of Israel's plans that are far from peaceful. Take, for example, another barbaric bombardment of Gaza. As long as the persecution of al-Assad continues, the progressive Western humanity will not notice it.

Or another moment: Israel employs special people for conducting information warfare. Just look at the situation in Lebanon during the 2006 war. As soon as someone would write about a positive side of this country or the actions of "Hezbollah", this resource would be attacked by those defending Israel's position.

"Pro-Western media wrote that the "Hezbollah" was involved in shootings of the "unarmed Syrian opposition." Is there any evidence to this?"

"Lebanon has absolutely no interest in a chaos in Syria. Sheikh Nasrallah himself spoke about it and regarded the events in the country as an anti-state rebellion. No one can confirm the false allegations of some media outlets that "Hezbollah" killed someone in Syria."

"What is the situation like now in Syrian cities? How strong are the radical opponents of Assad and what are they like?"

"The situation differs depending on a city. In some placed, like in both Damascus and Aleppo, the situation is under control and the people catch provocateurs as soon as they surface and turn them to the police. I am talking about those opponents who take up arms. This is the bulk of the Islamists from the "Muslim Brotherhood" and criminal elements. You should have seen this "opposition"! One gets the impression that all the criminals of the country became the rioters. Many of them have already admitted that they received 10-30 dollars per person. It was enough to look at these "oppositionists" who walk at night and shout "Death to the regime" and "Allahu akbar!"

There are members of the opposition who try to pose as democrats and are hiding abroad. The lion's share of them is corrupt officials removed from their posts for their crimes. The most prominent of them is the Democrats' former vice president Abdelhalim Khaddam, who has robbed half of Syria and is shouting louder than anyone about the "tyranny of Assad", while sitting in France. It was his "revelations" that formed the basis for the current charges against the Syrian president regarding the elimination of the Lebanese Prime Minister Rafik Hariri. Saad Hariri - son of Rafik Hariri who is now very much involved in rocking the Syrian boat and has his business in Saudi Arabia - gave him a villa in France.

And it is the Saudi Arabia that overwhelming majority of analysts called one of the instigators of "the Syrian revolution."

"The Syrian government TV channels reported numerous facts of arrest of militants brought from abroad, and seizure of large quantities of arms with Western labels."

"Television channels even showed arrested foreign security personnel who were coordinating the activity between the foreign centers and local bandits. We are talking in particular about the arrest of several foreign advisers after the suppression of a rally in the port city of Banias, where a large weapons warehouse was found.

With regard to representatives of foreign subversive forces, they were thrown into all neighboring countries, but mainly into Lebanon and Iraq, especially the latter.

Various training camps of militants fostered by the US have long existed in Iraq. These militants were moved from Iraq to Turkey by helicopters, and from there they also raid on Syrian territory."

"Syrian security forces are not the weakest in the world. Why did they make such an unfortunate mistake?"

"They got relaxed. For a long time, there were no serious challenges and therefore many serious mistakes have been made. But now the situation is under control.

"Certain behind-the-scenes forces are trying to play ethnic and religious cards against Assad."

"Rallies take place almost exclusively among the Sunnis. All others, such as Alawites, Shiites, Ismailis, Druze, and Christians - are nearly unshakable support of Bashar Assad. As for the Kurds, they are for the most part silent. Assad mitigated former discontent by giving the Syrian citizenship to those who did not have it. This situation has been observed historically, ever since the Ottoman Empire. Moreover, now the authorities are doing everything to prove to the Kurds that they are citizens of the country. Take, for example, the fact that they set up business courses for Kurdish women.

The Islamists from the Sunni are actively trying to drive wedges between Alawite and all the others, but so far without success. They are the ones who instigate the gossip that the Alawites are ruling the country, completely removing the Sunni majority from power. Take, for example, the Syrian government where only one person is Alava, one Ismailia, two Christians and the rest are the Sunnis.

Now Sunni radicals are spreading tales about Alawites that boil down to the same statements the Ukrainian nationalists used to spread against Russia when they were still a part of the USSR. They would say that "Ukraine without Russia will become like Switzerland".

Also read: Will Russia stand up to Syrian challenge?

Of course, a large proportion of the economy and business belongs to the Alawites, but to say that they totally control everything would be an overstatement. Business and economics there are mainly in the hands of the Sunnis, and to a lesser extent - the Christians, but not Alawites.

However, attacks against the Alawites are ongoing not only in the information field. There was a series of provocative attacks by Islamists at the Alawite representatives in the coastal strip, particularly in Tartous and Banias.

With regard to other ethnic and religious minorities, they understand the threat coming from the Sunni Islamists. They make no secret of their slogans. I had to watch one of these rallies that was held under the banners reading: "Christians - to Beirut, Alawite - to graves!"

As for the Druze, so far they have been quiet. There are only few of them, and they account for only approximately three percent of the total Syrian population, and they have enough sense not to listen to those in Israel. In the event of the fall of Assad they will be eliminated because the Sunni radicals believe them to be a sect that has no more right to exist than Alawites. For the same reason, Shiites and Ismailis also do not respond to the slogans against Assad.