During the Mercosur summit, Brazilian President Dilma Rousseff recalled Operation Condor when speaking about coups. Meanwhile, the Brazilian parliament considers impeaching the president. The bird of prey has once again cast its shadow on the continent. Technologies may change, but the goal remains the same - to remove Russia-loyal leaders from power. 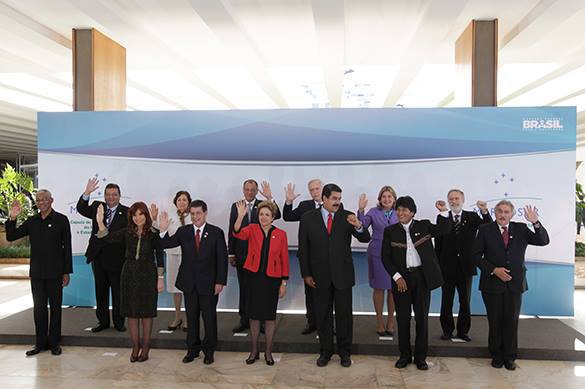 At the 48th summit of Mercosur political and economic bloc (Brazil, Argentina, Venezuela, Uruguay, Paraguay) that ended last Friday in Brasilia, Bolivia received the status of a full member. It was noted at the forum that during the existence of the association, the volume of intraregional trade has increased almost 12 times, while world trade had has a fivefold increase.

The main issue on the agenda was the growing threat of coups in the region, the Brazilian newspaper Carta Maior wrote.

"In South America, there is no more place for antidemocratic adventures," the newspaper quoted Brazilian President Dilma Rousseff as saying. Rousseff recalled President Joao Goulart-Zhang, who was overthrown in a coup on March 31, 1964 and died in exile on December 6, 1976 in Argentina. Operation Condor was a repressive campaign conducted by dictatorial governments, the Brazilian president said.

Operation Condor was a secret US-led operation that took many lives in South America, João Cláudio Pitillo of the State University of Rio de Janeiro (UERJ) told Sputnik. Many people were abducted or killed for being political opponents of dictatorships. "The fact that this is now recognized at the Mercosur summit is very important, as it indicates possible punishment," said the expert. Brazil, he noted, joined the discussion of the problem later than other countries did.

President Dilma Rousseff plainly indicates the perpetrators, and this is also highly important as it was never the case before, João Pitillo noted.

One may assume that Operation Condor has never been stopped. This is evidenced by the coups in Honduras (2009) and Paraguay (2012). It was the technology that was changing. In Honduras, it was an ordinary army coup, but in Paraguay, Fernando Lugo was removed from power in a constitutional way - via the parliament vote, with the help of information technology.

Namely, a bloody conflict was staged in a latifundia, when eleven peasants were killed and dozens of others were wounded. People were deliberately enraged, and the parliament decided to remove the president from power, as he could not control the situation in the country.

"Probably, there is a new plan ("Condor") that will not be implemented by military intervention - it will be more sophisticated, - Cristina Fernandez de Kirchner said at the summit. - Who knows, maybe now they call themselves vultures rather than condors. This is still a bird of prey, and we need to strengthen democracy more than ever now."

In the era of the Internet, a coup is based on the technology to attack public awareness. During the 1970s, the general public was told that "Brazil was falling into the hands of the Communists." Nowadays, a negative attitude towards the government is being formed.

For example, Brazilian radio station "Radio Porto Alegre" (a music station) airs news every hour. In the news block, they always inform people about the growing gasoline prices, the reduction of social funding, investigation of corruption cases at the state-owned company Petrobras, about embezzlement at the Consulate of Brazil in New York, about Dilma's opponents, who believe that anyone, who does not want her impeached is a traitor, and so on and so forth.

This news block airs the whole day, planting the negative information into people's minds. As a result, people are led to believe that the state of affairs in the country is deplorable, but Dilma can only care less about it.

Here is a headline in one of the most popular Brazilian newspaper: "Parallels. He doesn't know. He didn't see. And he didn't want. Blatter: A form of Dilma runs FIFA."

Should a massacre occur somewhere in a Rio favela, the parliament will say that Dilma is incapable of keeping the situation in the country under control.

"I think that modern technologies have made a big leap forward since the time of Operation Condor, although the tasks basically remain the same," Vladimir Davydov, Director of the Institute of Latin American Academy of Sciences, Doctor of Economic Sciences, professor and academician told Pravda.Ru.

According to the expert, in Latin America, "we are witnessing wars of compromising materials and staged protests against the heads of states and governments that are friendly to Russia." "Earlier, US special services were practicing mostly secret-service work and bribery, they were funding radical opposition, but now they proceed to information war mechanisms."

According to Vladimir Davydov, Brazil's local mafia is sensing a threat to their positions in favelas.

"The Brazilian government has launched serious work against the domination of drug traffickers in favelas, and mafia mobilized its militias to turn peaceful protests into serious riots," the expert told Pravda.Ru.

Cristina de Kirchner has found an antidote to the new Operation Condor - intra-bloc solidarity. According to Kirchner, one should never acknowledge unconstitutional means for rising to power. The countries that promote such means of power change should be obstructed and excluded from regional blocs, the Argentine president believes. And, of course, one should organize counter-propaganda, which is still a problem in Latin America.

Author`s name Галина Тычинская
18:54
Ukrainian soldier uses chainsaw and fire to release US howitzer from ice trap
18:30
Onet: Ukraine will lose in six months due to shell shortage
14:17
Russians buy more than 50 tons of gold in 2022
13:34
USA's plan to give 20 percent of Ukraine for peace hoax
19:57
Russia will use all of its military potential to counter Western arms supplies to Kyiv
18:34
Biden changing strategy on Ukraine to reach diplomatic solution with Russia
17:36
Consequences of NATO's possible supplies of fighter jets to Ukraine get clear
15:16
Ukrainian forces suffer heavy losses while trying to cut across Dnieper
13:35
USA's next step is to suppress European economies
12:52
Victoria Nuland turns herself in about Nord Stream blasts
Medvedev: Ukraine as a state to be devastated, go bankrupt and be turned into colony