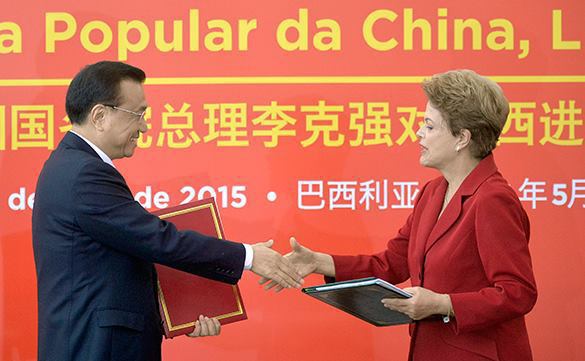 China is busy doing the things that Russia can not do for economic reasons - the Celestial Empire is changing the world order. One can say that China is conquering the world with loans. Latin America is of special importance for China at this point. Chinese Prime Minister Li Keqiang is touring South America and signed landmark agreements with Brazil.

China is conquering the world not with weapons, but with loans. After the events on Tiananmen Square in 1989, the Chinese leadership understood what Wall Street's globalization may bring. China still lives under numerous Western sanctions. For example, Chinese companies are not allowed to deliver advanced technologies. Therefore, the Celestial Empire has been developing everything on its own. The country has a national payment and financial systems, as well as a favorable business investment climate for ambitious national projects.

China and Brazil try to flee from the US dollar

As a result, China ensured the growth of production for both domestic consumption and for export. With the help of a competent tax policy, Chinese communists accumulated revenues in state-owned banks and turned the country into the largest creditor for the whole world. After that, Chinese economy started working for its politics.

China's economic significance in the world has been growing steadily during the recent years. China even questions the monopoly of the US dollar, and the yuan will take its place as soon as the Celestial Empire deprives America of the ability to put pressure on countries in terms of political decision-making.

The Bretton Woods system was established politically and was legally formalized at the Bretton Woods conference of the United Nations in 1944. Later, the Americans agreed to switch to petrodollars with Saudi Arabia. China may revise those agreements soon.

This is evidenced by Premier Li Keqiang's visit to Latin America on May 20-24, 2015. Previously, China was supporting USA's opponents in the region - Venezuela, Bolivia, Cuba and Argentina. Now China has started investing in Brazil and allies of the United States - Chile, Colombia, Peru.

The last three countries form the Pacific Alliance that focuses on cooperation with the United States. These three countries are also members of the Trans-Pacific Partnership (TTP). The results of the visit to Brazil are really impressive. China and Brazil have signed 37 agreements worth 53 billion dollars. The agreements cover different areas, including infrastructure, energy, aerospace and mining industries.

The main project is about the construction of the transatlantic railway linking the Midwest of Brazil with the Pacific Ocean. The railroad will go through Peru and may then extend to Bolivia. The new railway will give the Brazilians and other Latin American producers an opportunity to trade with China directly.

Brazil's exports to China in 2014 amounted to over $ 40 billion, of which 16.6 billion accounted for soy, iron ore - 12.3 billion, oil - 3.5 billion, 1,4 billion - cellulose and 880 million dollars - for sugar, officials with the Ministry for Development, Industry and Foreign Trade of Brazil said.

Another significant agreement was signed between Brazilian bank Caixa Econômica and the Industrial and Commercial Bank of China to establish an investment fund with a capital of 50 billion dollars. Earlier, Chairman of the State Council of China Xi Jinping said that China intended to invest about $ 250 billion in Latin America in this decade.

As we can see, China is solving Brazil's major problems, thereby gaining gratitude and appreciation from the Brazilian leadership. Brazil is going through hard times currently, its GDP is stagnating, and Chinese investment will contribute to the growth of employment, domestic demand and macroeconomic indicators.

The agreement about the investment fund worth $50 billion is crucial for the economic recovery of Brazil and the developing world in general. This new initiative complements other initiatives of the  partners, namely their participation in the Asian Banking Infrastructure Investments (ABII) and the new BRICS Development Bank. This creates a real alternative to the existent financial structure in the form of the World Bank and the IMF - the institutions that impose severe and sometimes crisis conditions for crediting developing countries.

China may thus achieve its main objective - to make the yuan an international reserve currency.

The United States is trying to show counteraction to China's actions in the region, albeit without much enthusiasm, because there is no resource of pressure. The only open dissatisfaction was demonstrated on the construction of a new transatlantic channel in Nicaragua. US officials said that the project lacked transparency and asked the government of Nicaragua to take care about environment and land concerns.

Author of "BRICS and the World Order of the Future," Oliver Stuenkel, said in an interview with El Pais Brasil, that the bloc of Brazil, Russia, India, China and South Africa was experiencing political revival, despite economic slowdown in most countries. Stuenkel believes that China will remain the largest trading partner of Brazil to start the BRICS bank.

This will be an important step, because the bank will connect bloc members to create strong links between them. According to the expert, the bloc is no longer dependent on the problems of economic growth of each separate country and gradually becomes a political alliance. BRICS saved Russia from total political isolation after political leaders of the bloc members refused to coordinate their actions with the United States and Europe regarding the Crimean issue.