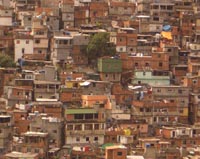 Silva is the first Brazilian president to visit the Cantagalo shantytown perched above the upscale beach districts of Copacabana and Ipanema.

On Thursday, all access to the area was shut down as police occupied strategic points in the often violent shantytown controlled by heavily armed drug gangs.

The president's visit came just a week after police traded fire with drug-gang members while attempting to arrest a man sought in a robbery that resulted in the death of an Italian tourist. No one was hurt in the gun battle but two streets in Ipanema were briefly shut down causing panic among residents.

At Cantagalo, Silva is expected to announce 3.8 billion reals (US$2.1 billion; EUR1.4 billion) in investments around the state for poor communities, known here as favelas.

Some 35 million reals (US$20 million; EUR14 million) in investment is intended for Cantagalo and the neighbor Pavao-Pavaozinho shantytowns, home to about 50,000 people.

Rio's shantytowns sprung up at the end of the 19th century as freed slaves made their homes on unclaimed land, mostly along the city's steep hillsides. Later migrants from the country's poor northeast swelled the favelas.

Today, about a fifth of Rio de Janeiro's 6 million residents live in the favelas. Many have been there for generations.

In recent years, the government has taken steps to incorporate the ramshackle favelas into the urban infrastructure, giving names to streets and putting them on city maps.