Minks-2 was just a break before big war 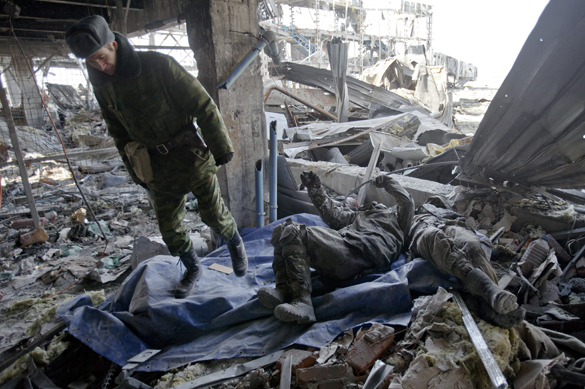 March 14 was the last day, when, the Verkhovna Rada of Ukraine was supposed to adopt a resolution, according to which the Donetsk and Lugansk regions would be subject to a special regime. The Ukrainian parliament is to meet on March 17. If there is no political settlement, there is no peace. Kiev and Washington want to undermine the Minsk arrangements.

The date was set in accordance with the approved "Complex of measures to execute the Minsk Agreement." The document says that no later than 30 days from the date of signing, the Verkhovna Rada of Ukraine should pass a decree indicating the territory that would fall under the regulations of a special regime under the law "On temporary procedure of local government in separate areas of Donetsk and Lugansk regions." The Verkhovna Rada will gather for its regular meeting on March 17, and the agenda of that meeting does not include this question.

"We are on the verge of disrupting the Minsk process, and the complex of measures to execute the Minsk Agreements, signed on February 12, will be disavowed, - a representative of the People's Republic of Donetsk, Denis Pushilin said on Friday. - An integral part of the package of measures is a political settlement, and the settlement has a clear step by step chronology. Kiev in fact has 24 hours left to fulfill its part of the obligations," Pushilin said.

Kiev sabotages not only the beginning of the political settlement, but also other agreements. The shelling of towns and villages continues; Kiev does not withdraw all heavy weaponry to the required distances of 50 and 70 kilometers. There is no sign of lifting the blockade for the restoration of socio-economic conditions of the population of the DPR and LPR. On the contrary, measures are taken to limit the freedom of movement, freedom of speech; any attempts to criticize the Kiev regime are suppressed.

"Kiev does not withdraw all the heavy weaponry. The OSCE is aware of it, but they do not say anything, - the head of the People's Republic of Lugansk, Igor Plotnitsky said. - The undeclared war continues. The transport, economic, political, financial blockade continues."

According to the head of the People's Republic of Donetsk, Alexander Zakharchenko, "the truce is being observed on the level of ninety percent. There are a few hotspots left - the Donetsk airport, the village of Shirking and the town of Gorlovka."

"Ukraine is withdrawing out-of-order and partially destroyed units of hardware bringing new ones to the front line, Yuly Fedorovsky, a Lugansk-based blogger, political scientist, candidate of historical sciences told Pravda.Ru. - The OSCE documents the withdrawal, but says nothing about the arrival of new weaponry."

Why doesn't Kiev want to perform the Minsk Agreement?

The Kiev government does not act independently. Let's look at the facts. On March 10, the US and Ukraine disrupted the OSCE resolution in support its monitoring mission in Ukraine. According to Russia's permanent representative to the OSCE Andrey Kelin, during the discussion of the terms of the Minsk agreements, Ukraine and the United States attempted to rewrite them.

On March 12, Ukrainian President Petro Poroshenko said at the meeting of the National Security Council that the country was strengthening its combat potential. Poroshenko noted that despite the formal advance of the peace process the country was conducting the training of Ukrainian servicemen, including with the help of partners from NATO countries.

Obama and Poroshenko did not sign the Minsk Agreements personally. What about Merkel and Hollande? Is this silence of the lambs? Obviously, to continue the work that was started it is the German Chancellor Angela Merkel who should now put pressure on Kiev to achieve at least some progress in the implementation of the Minsk Agreements. Yet, there are no efforts being taken.

One shall assume that the idea of the European "big two" was a performance that had been coordinated with Washington and then staged to save the Ukrainian regime from a military catastrophe and give it a break.

Here is a proof to this assumption. Last week, US National Security Advisor Susan Rice and German Foreign Minister Frank-Walter Steinmeier discussed the strengthening of sanctions against Russia. The EU and the USA may tighten sanctions on Russia if the militia attempt to capture new territories.

According to Western experts, the truce is a temporary postponement of the protracted conflict that will most likely end up with eastern regions of Ukraine turning into de facto Russian satellite states, Lucas Powers of CBC News wrote.

Militia to respond to Kiev's provocations

The cease-fire is hardly indicative of the possibility to cease hostilities in Ukraine, Jane Boulden, Head of the Department of International Relations and Security Studies at the Royal Military College of Canada believes. According to her, both parties acknowledge that they do not necessarily understand it as a step towards peace. They agreed to this, because taking a break suits them both, Boulden believes. According to her, Putin's tactic of "ebbs and flows," may not push the West towards intervention, but reach the desired geopolitical objective in Ukraine.

"The first and less likely possibility is that Putin negotiates legally binding independence referendums in Luhansk and Donetsk in return for an end to the war, but this option would be "political suicide" for Ukrainian leaders in Kiev," Randall Hansen, director of the Centre for European, Russian and Eurasian studies at the Munk School of Global Affairs in Toronto believes.

"Apparently, hostilities may resume in the coming days, blogger from Luhansk Yuly Fedorovsky told Pravda.Ru. - Thus, Ukraine will be relieved of the need to take fundamental documents to execute the Minsk agreements."

War in Ukraine will continue in Europe