A top Russian diplomat stated that OSCE sabotaged Moscow’s suggestions on the norms to monitor presidential elections in Russia. The official added that the Russian administration was not going to change the format of the international monitoring of March 2 elections in the Russian Federation, Interfax reports. 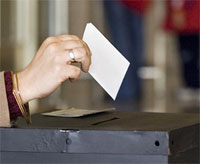 The Organization for Security and Cooperation in Europe asked Russia’s Central Election Committee to revise the number of observers and the time of their arrival in Moscow. The official invitation from the committee said that observers were allowed to come to Russia from February 28. The OSCE believes that it would be too late.

“The OSCE continues to openly sabotage our suggestion on collective norms of election monitoring,” the director of the European Department for Cooperation of the Russian Foreign Affairs Ministry, Sergei Ryabkov stated Friday. “We fulfill our obligations, but we are not going to over-fulfill them,” he added.

Russia’s Foreign Ministry believes that the mission of OSCE’s observers will arrive on February 28 to observe the presidential elections in Russia.

“The OSCE tries to excite doubts regarding Russia’s readiness to fulfill its obligations in the field of democratic and transparent elections,” Ryabkov said.

Ryabkov said the OSCE "must chose: whether to join a constructive and clear movement to single election monitoring standards, or continue its political games, which we do not accept."

Russia made a similar decision in the December parliamentary election that prompted the OSCE to refuse to send observers.

“Why does Russia have to always accept many more observers than other countries do? Russia acts absolutely transparently at this point,” the diplomat said.

Russia hopes that common sense will eventually prevail at OSCE, and the organization will make a positive decision to send observers to presidential elections in Russia.

Following an unprecedented period of activity in the 1990s and early 2000s, the OSCE has in the past few years faced accusations from the CIS states (primarily Vladimir Putin's Russia) of being a tool for the Western states to advance their own interests. For instance, the events in Ukraine in 2004 (the "Orange Revolution") led to allegations by Russia of OSCE involvement on behalf of the pro-Western Victor Yushchenko. At the 2007 Munich Conference on Security Policy, Vladimir Putin made this position very clear:

“They [unnamed Western States] are trying to transform the OSCE into a vulgar instrument designed to promote the foreign policy interests of one or a group of countries. And this task is also being accomplished by the OSCE's bureaucratic apparatus, which is absolutely not connected with the state founders in any way. Decision-making procedures and the involvement of so-called non-governmental organizations are tailored for this task. These organizations are formally independent but they are purposefully financed and therefore under control."

Russia and its allies are advancing the concept of a comprehensive OSCE reform, which would make the Secretariat, institutions and field presences more centralized and accountable to collective consensus-based bodies and focus the work of the Organization on topical security issues (terrorism, non-proliferation, arms control, etc.), at the expense of the "Human Dimension", or human rights issues. The move to reduce the autonomy of the theoretically independent OSCE institutions, such as ODIHR, would effectively grant a Russian veto over any OSCE activity. Western participating States are opposing this process, which they see as an attempt to prevent the OSCE from carrying out its democratization agenda in post-Soviet countries.