George Soros always there, where weak president is

Billionaire George Soros arrived in Kiev to promote his "Marshall Plan" to save Ukraine. When it comes to Soros, one must always bear in mind the fact that he always pursues his personal goals. His primary goals includes the collapse of both the eurozone and Russia. Soros has never showed love for strong presidents, but he has always been on the side of incapable ones. What does Soros plan about Ukraine? 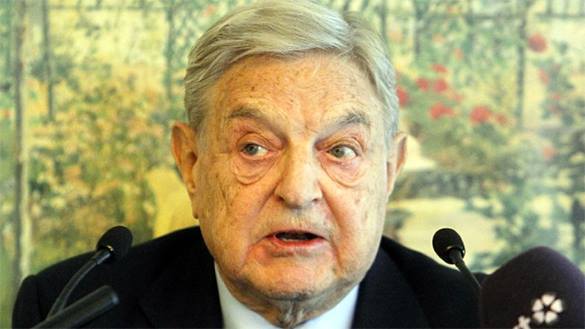 Prior to visiting Ukraine, billionaire George Soros said in an interview with the Financial Times that Western leaders were running a "dangerous" strategy in relation to Russia and Ukraine. According to him, the economic crises in both Russia and Ukraine create a "lethal danger" to the eurozone.

"Europe needs to wake up and recognize that it is under attack from Russia. Assisting Ukraine should also be considered as a defense expenditure by the European Union countries," Soros said.

Soros does not offer to lift sanctions against Russia. He proposes to give Ukraine billions of dollars in aid. The EU can take this money from the funds that  provide assistance to Hungary, Romania, Portugal and Ireland. The IMF will provide for the remaining part of the amount, George Soros believes.

As a result, it will be possible to collect $50 billion that will save Ukraine from bankruptcy. Otherwise, Soros believes, the champions of "hard-line" policy in Russia will strengthen their positions. Conversely, Ukraine's success will strengthen Russia's opposition. According to Soros, the European Union is falling apart, as the Kremlin sets European countries against each other on the gas front.

Noteworthy, George Soros said in June 2012 that the euro zone had only three months left to live. As for Russia's disintegration from within, we know in practice what he was doing in the 1990s. In the first case, it goes about an opportunity to make money, the financier plays for the decline of the euro, spreading rumors about the imminent demise of the eurozone, while in the second case, he executes a political order from the US State Department.

"George Soros has two things to pursue in Ukraine. The first one is to continue to strongly support initiatives to dismantle the former Soviet Union, - Leonid Savin, chief editor of Geopolitics magazine told Pravda.Ru. - After Ukraine, he will look into  Moldova, the Caucasus republics and Belarus. Secondly, he wants to make money on the Ukrainian crisis. He wants to give some loans to obtain dividend, to be able to buy strategic enterprises, if there are any of them left in Ukraine."

What does Soros want in Ukraine?

Soros has been working on the collapse of the former Soviet Union since the time of Mikhail Gorbachev, through his charitable foundations. He orchestrated and conducted the Georgian "revolution of roses" in 2003. In 1992, he masterminded "Black Wednesday" in England, when the pound sterling fell by 12 percent. George Soros also speculated for the fall of national currencies in Malaysia, Indonesia and the Philippines in 1997.

It is quite possible that the recent decline of the Russian ruble is an affair developed by the Soros Foundation. During the difficult economic situation in 1998, Soros announced that Russia needed to devalue its currency. Afterwards, Russia was doing what Ukraine is doing now - waging a war and boosting inflation.

There is no doubt that Soros earned a lot on privatization in Russia, as he was close to the "team" and then-prime minister Gaidar. He still has ties in Russia, despite the official "exile" of his subversive funds from the Open Society in 2003. Is there another explanation to the fact that Russian schools opened a special program titled "Tolerance" in 2013 that he funded?

"Soros is not only a financier, but also an active political player, - Alexei Zudin, a member of the Expert Council of the Institute of Socio-Economic and Political Studies told Pravda.Ru. - His position towards Russia is particularly rigid. He is a  long-standing and quite irreconcilable enemy of the policies of the Russian authorities to build a modern and sovereign state. In light of the Ukrainian crisis, he can stand in the same line with such personas as John McCain."

As for his affirmations of the "economic revival" of Ukraine with the assistance from the US and the EU and the growing influence of pro-Western opposition in Russia against such a background, they are absurd, Zudin believes.

Let us return to Ukraine. What projects is Soros interested in there? They include the energy sector, shale deposits and gas pipelines. The EU should take over most risks in investing the above-mentioned $50 billion. In the meantime, Soros' hedge funds buy stocks of the companies engaged in the extraction of shale gas in Ukrainian regions. Afterwards, Soros will throw those stocks on the market to receive enormous profit.

Ukraine feels very inspired about these plans, of course. Ukraine is willing and able to sell itself to the devil for the sake of cash."His plan to rescue Ukraine is good, but it would be nice if he made the first installment in the adequate multibillion-dollar fund to support Ukraine," daily.com.ua said.

Ukrainian Prime Minister Yatsenyuk agrees with Soros' plans too. On January 8, in an interview with German Chancellor Angela Merkel, he repeated Soros' ideas about Russia, calling the country a threat to Europe. Will Angela Merkel succumb to Soros' provocations? For the time being, Germany agreed to give Ukraine a few billion euros.

"Europe and the United States do not have the means and resources to fully provide sufficient assistance to Ukraine, - said Leonid Savin. - First of all, these countries are in need of certain economic, political and social reforms. Secondly, we see that their external debt is enormous, and they need to be primarily concerned about the efforts to rescue their own economies, rather than that of Ukraine."