Despite the difficult economic situation, the European Union intends to expand even further. According to a member of the European Commission for Enlargement and European Neighbourhood Policy Stefan Fule, over the next six to eight years, the dream of a number of countries to become EU members may be fulfilled. However, the cautious tone of the report makes it look like sugarcoating. 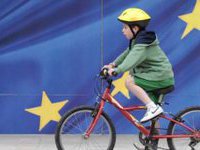 The European Commission published a report on the EU enlargement that rates the chances of the countries for the accession to the EU. The rating includes Iceland, Montenegro, Serbia, Macedonia, Albania, Croatia, Bosnia and Herzegovina, Iceland and Turkey. Among those, Brussels has no serious claims only to Iceland and Montenegro. Experts believe that it will be possible to talk about the admission of new members to the EU only in six to eight years.

The commissioners had most questions to Serbia. This spring the country was granted the status of a candidate for membership, but the commissioners are not ready to set a date for the next round of negotiations. The main reason is the unresolved conflict between Serbia and Kosovo. In addition to the establishment of relations with Pristina, Belgrade is advised to ensure the independence of the Central Bank and to reform the judicial system.

The issue of accession of Macedonia in the EU will not be solved in the near future either. It was granted the candidate status in 2005, but since then the negotiations have not moved forward. The reason for the delay was the dispute of Skopje and Athens over the name of Macedonia. Greece has a region with the same name; therefore, the UN called the country the former Yugoslav Republic of Macedonia.

Albania has a slim chance of integration into the EU and was recommended to conduct a reform of the Parliament and electoral system. Bosnia and Herzegovina is in the toughest situation. According to the report, the country has deviated from the path of European integration. Montenegro is the only country in the region that qualified for negotiations on the accession to the EU this year. Most likely, Montenegro will become an EU member immediately after Croatia. Croatia is preparing to take full membership on July 1, 2013, becoming the 28th EU country.

Apart from Montenegro, Iceland is another country that has a good chance of joining the EU. According to Associate Professor of European Integration at MGIMO Alexander Tevdoy-Burmuli, Iceland is the least problematic candidate for the European Union, and for the country the membership in the EU is the only way to save its economy. So far the question of joining the EU has not even been put to a referendum. This is partly due to the fact that the country wants to avoid introduction of tough fishing regulations that apply in the EU.

The prospects of the longest-time candidate, Turkey, remain unclear. Its conflict with Cyprus formally remains the main obstacle. In 2012, the long-standing conflict escalated because Cyprus Presidency in the EU. The report notes that Turkey has dramatically reduced interaction with Europe. The EU is also concerned about the human rights situation in the country.

The main conclusion of the report is that despite the crisis, the EU does not give up the idea of expansion, yet, it does not intend to make rush decisions on the European integration.

The EU citizens believe that the crisis will make the EU stronger, but most do not want the Union to recruit new members. A recent survey conducted by Eurobarometer 77 where Serbian citizens participated for the first time, showed that other candidate countries, as well as Turkish Cyprus, still believe in the EU. However, half of the respondents believe that the euro area economy is very weak and improvements are not anywhere near. 53 percent of the respondents spoke against the entry of new countries into the EU, while 36 percent of the EU citizens supported the expansion.

New members are mostly welcomed by the residents of the "backcountry"' of the EU - Poles (62 percent), Latvians and Romanians (58 percent), and Bulgarians and Slovenians (56 percent). The least support for the EU expansion comes from the wealthy Germans (20 percent), Austrians (21 percent) and French (25 percent). These numbers are not surprising, because these countries are major donors to the EU and have to solve the main problems of the Union.

Doctor of Political Sciences Alexei Gromyko provided the following explanation of the formal part of the EU accession. If a country is a candidate for accession to the EU, this procedure cannot be slowed down by any political decision. Montenegro is a country of the Western Balkans, which, despite all the problems of the EU, in the near future will become a member. It is so small that it will not worsen (or improve) the EU economy. From a political point of view, the EU will even win, because by doing so it will show that even in a crisis many countries are knocking at its doors.

Now the situation is such that it is impossible to stop the conveyor. This will be equal to a state of emergency as the world will regard a failure of any country to join the EU as an additional signal of the weakness of the EU and its possible collapse. There is no economic reasoning behind these actions. The EU currently has no means to raise the living standards of Montenegro, build roads and infrastructure. Therefore, it has to do only with the political expediency, maintenance of appearance and image of well-being.

Obviously, at this time the Eurozone should expand only by accepting powerful countries as members and not considering the developing ones. However, strong economies are not in a hurry to join the Eurozone, looking at the membership as loss of freedom.

As the number of members of the European Union increases, it is becoming increasingly more difficult to make decisions. In the most difficult times, key agreements are made at the level of France and Germany. This shows that when difficult choices have to be made in a crunch, the fewer participants, the better. It is time for the EU to seriously consider whether further expansion is worth it.

The expansion of the European Union provides certain advantages for Russia. Wealthy countries are approaching the territory of the Russian Federation. Despite the crisis, the EU gives boost to the economies of its new members. This means more opportunities for interaction. Therefore, in the medium term, this would be advantageous for Russia. The EU believes that the future expansion will have a very positive impact on the  Russian economy as the economic and political stability in the neighboring countries will improve as a result of the expansion.

In terms of economics, the expansion of the EU opens up new opportunities for the Russian economy. Russia will have access to the expanded EU market with 450 million people. However, the main question remains: is the accession of new countries into the European Union a natural phenomenon or a political maneuver to maintain the appearance of well-being?