Will Russia and Ukraine stop fighting ever? 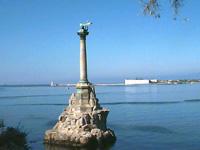 The authorities of Sevastopol, Ukraine, claimed that the Russian Black Sea Navy owes the city. In addition to that, Russia and Ukraine are trying to solve another "eternal" issue in their relations - the gas problem. How long will the two countries be fighting on these two subjects? Is there a chance to solve everything once and for all? Pravda.Ru asked expert opinion from Ukrainian scientist of politics Vladimir Kornilov.

Officials representing the municipal government of Sevastopol said that the city would ask for an increase of payments for social needs from Russia's Black Sea Navy . According to Ukrainian officials, Russian officers stay in the city after the service and use various benefits, such as free public transportation, etc.

The claims from the Sevastopol authorities to the Black Sea Navy coincided with another event that took place in the Russian-Ukrainian relations. Ukraine's Prime Minister Nikolai Azarov visited Moscow to discuss the prices on gas. These two subjects - the deployment of the Russian Black Sea Navy in Ukraine's Sevastopol and the prices on natural gas for Ukraine are closely connected with each other. Last year, the two countries agreed that Ukraine would extend the deployment of Russian ships in Sevastopol before 2042, whereas Russia promised to give Ukraine a discount on natural gas prices.

Is Ukraine trying to put pressure on Russia again? Will the relations between Russia and Ukraine aggravate because of the two problems? Scientist of politics Viktor Kornilov believes that the authorities of Sevastopol have made just another reminder to Russia regarding the payments from the Black Sea Navy to the city budget.

- Does the Black Sea Navy owe a lot to the city of Sevastopol?

- No, it does not go about a considerable debt. The Black Sea Navy acknowledged the existence of arrears and began to settle them. The process is going slowly but surely. The tariffs on electricity and gas have been growing in Ukraine nationwide, including Sevastopol. The prices are growing for everyone, including the Black Sea Navy as a consumer of public services of the city. The dispute is not supposed to trigger an aggravation of relations between Russia and Ukraine. It seems that the command of the Russian Navy estimates the situation correctly too.

- When they talk about the navy, another problem in the relations between Russia and Ukraine comes up immediately as well. It goes about natural gas. Ukraine wants a considerable reduction of prices on gas. A discount of $100 per each cubic meters of gas, which Russia agreed to provide last year, is not enough for Ukraine today?

- One has to realize that the formula "navy in return for gas" was profitable both for Russia and Ukraine. If the Kharkov agreements had not been signed last year, Russia would have lost a lot. Ukraine would have lost a lot more, though. The previous gas price, which the country inherited from the orange administration, would have virtually killed the heavy industry of the country. Today, the Ukrainian administration understands that just a discount is not enough. One has to revise the formula, which Yulia Tymoshenko proposed.

- If Russia cuts the gas price and receives nothing in return - it's just does not sound fair. Will Ukraine make concessions to Russia in this case?

- It will have to, definitely. Russia offered Ukraine to join the Customs Union along with Belarus and Kazakhstan. The Ukrainian administration does not like the idea much. They do not offer anything in return indeed, although they could offer "gas in exchange for the navy" deal, for example. Russia is not interesting in watching the Ukrainian economy rolling down the hill.

- Maybe the Ukrainian authorities are not willing to be too close to Russia?

- Not likely. The sitting Ukrainian administration is just trying to find a compromise with Russia.

- Is there a chance that the topics of gas and the Black Sea Navy deployment in Sevastopol will no longer be discussed in the Russian-Ukrainian relations?

- The topics are going to be eternal, at least for the time when Russia and Ukraine act as two independent states. The two sides will always be looking for compromises. It's not supposed to be like it was during Boris Yeltsin's stay at power. He was ready to make concessions today in return to promises of friendship in the future. Viktor Yushchenko's behavior was not adequate either. He was conducting negotiations with Russia in the form of ultimatums and never-ending anti-Russian attacks.

- Do you think it will be possible to avoid another aggravation in the Russian-Ukrainian relations?

- Yes, it will be possible, we can do it. There are many things, which Ukraine can offer. Ukraine is only supposed to be ready for making concessions in return.