Less than half of citizens in the euro zone are happy with European monetary system five years to the day after it replaced the franc, the mark and other national currencies, and following a painful rise in the cost of living. 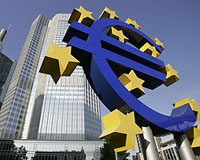 A growing number of Europeans believe that the biggest monetary revolution in history has done more harm than good to national economic growth, the job market and standards of living, recent opinion polls have indicated.

It is in France, Germany and Italy, the most enthusiastic advocates of the move to the euro, where some of the highest dissatisfaction rates were recorded.

A poll published last week in France showed that 52 per cent of the French thought the euro had been a "bad thing."

The main complaint is that the euro has led to a rise in prices 81 per cent described price hikes as its worst failing, a poll published by the European Commission indicated. According to the poll, Italy is thehappy, followed by Greece and the Netherlands. Ireland is the happiest.

In France, official statistics suggest that inflation is no higher than before the euro, hovering around 1.6-2.1 per cent yearly since 1999.

But press investigations have shown that these statistics are inaccurate when it comes to basic commodities. According to Le Parisien, which published its own comparative study, the price of 30 everyday items had shot up by 80 per cent in the past five years. A baguette cost 65 cents in 2002 and 80 in 2006 up 23 per cent. A coffee in a cafe had rocketed 120 per cent, a kilogramme of potatoes had gone up by 93 per cent and toothpaste by 84 per cent.

People were still finding it hard to get to grips with the real value of things, and as a result were spending less as a precautionary measure, said the study.

The European Commission insisted last week that there was a "certain erroneous perception" of inflation.

"Inflation rates for some countries have never been as low for as long," said Joaquim Almunia, the financial and monetary affairs commissioner.

Other advantages included better protection against currency fluctuation, a reduction in the cost of imported goods, a rise in exchange and investment within the Euro zone, thus reducing dependence on outside trade, and the practical benefits of using the same currency across the Union, the Daily Telegraph reports.

When the euro became real money in millions of European pockets five years ago, enthusiasmfor the fledgling currency was muted. Now, as it emerges as a global medium of exchange to rival the dollar, public support for the euro is lower than at any point since its induction in 2002.

Yes, the currency has bedded down well, outgunning the dollar on currency markets, locking together 13 disparate European economies and more than 300 million people, and acting as a solid reserve - and diversifying force - for a growing number of central banks around the world. Yes, it's the perfect tender for European travelers, who can now move from Cadiz, Spain, to Helsinki, Finland, without having to visit a bureau de change.

But try telling that to Germany's 4 million unemployed, who blame the one-size-fits-all interest rate for their plight, or to Greeks, who must be adept at multiplying by 340 to get a sense of an equivalent cost in their former currency, the drachma.

According to a recent EU survey, just 48 percent of eurozone citizens think the transition from national currencies to the euro was a beneficial move, down from 59 percent five years ago.

While that dissatisfaction may wear off as the continent's economy rebounds from several years of stagnation, it's unlikely that the euro will replace the dollar as the preeminent global currency anytime soon, say experts.

"The euro has some way to go yet because of the still relatively undeveloped capital markets [in Europe ] compared to the US ," says Adam Cole, senior currency strategist at RBC Capital Markets, an international investment bank. "Looking at the broad range of assets, the US still leads the way in terms of equity markets, derivative markets. The US is still some way ahead. The eurozone is catching up."

Complicating the euro's standing vis-à-vis the dollar is the fact that although the eurozone comprises around the same number of people as the US - 300 million, give or take - its economy remains far smaller. More disadvantageous still, the eurozone is, unlike America, a collection of economies all moving at different speeds and different cycles - but with only one interest rate to service the system, the Christian Science Monitor reports.

At times, the eurozone creaks under the strain of this "one-size-fits-all" interest rate. At one moment it appears too punitive for struggling economies; this was particularly true of Germany in the early years of the euro when unemployment soared. At other times, rates appear too lax to rein in overheating economies like Ireland and Spain. The Organization for Economic Cooperation and Development (OECD) said last week that the euro had delivered less economic integration than expected.