The demolition of monuments that the United States has been obsessed with recently continues one of the trends of the modern-day world. Until recently, it seemed that the war on monuments in the 21st century was exclusively the preserve of Ukraine and Poland, but now it is clear that this is not the case. 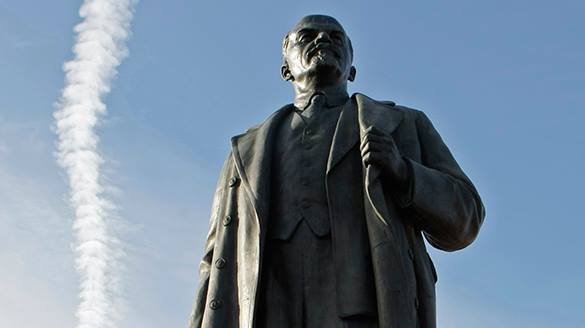 However, there is nothing new in the phenomenon per se - the demolition of monuments is an attempt to affirm a "final and irrevocable" victory, which, as a rule, is neither "final" nor "irrevocable." Ukraine positions the demolition of all monuments to Vladimir Lenin, the leader of the Great October Revolution, as one of the greatest achievements of the new, pro-European Ukraine.

Swiss newspaper Neue Zürcher Zeitung notes that it is difficult to understand the enthusiasm of those Americans, who want to destroy the "wrong" monuments. Russia is far from such "progress," the newspaper believes. It will take Russia years to remove all objectionable "witnesses of history." As long as reaching consensus on the matter in the Russian society is impossible, incompatible things continue to coexist in Russia. Neue Zürcher Zeitung exemplifies its point of view with the city of Yekaterinburg, where a church built on the place, where the family of the last Russian emperor was executed. However, a street to this church is named after the regicide, and it was the townspeople, who did not let the authorities change the name of the street, the Swiss publication wrote.

The author of the article notes that Russia is a country that has officially renounced communism, but Lenin's presence in the country is still strong. "This is what monuments are for," the author concludes.

We would not say that there are no such discussions in Russia. At the same time, the Russians discuss the erection of new monuments to notorious historical figures, rather than the demolition of old ones. For example, the monument to Ivan the Terrible was unveiled in the city of Orel, while the authorities of the city of Alexandrov (the Vladimir region) discuss such an opportunity as well.

Doctor of Historical Sciences, Andrei Zubov, has this to say on the subject: "With all the horrendous crimes committed by Peter the Great and Catherine the Great, people can tolerate them. At the same time, people can not tolerate Ivan the Terrible, Nikolai the First, Lenin, Stalin and their henchmen. Of course, people like Peter the First and Catherine the Great can not be genuine heroes. This is the title only for those people who fought fiercely to self-immolation for the good and freedom of other people, even though they could commit inevitable mistakes and even cruelties, like general and then President Grant in the United States."

For this category of people, the problem of monuments does not exist. They are convinced that everything that is "wrong" must be destroyed. They do not seem to care much about the fact that Russia had had the experience of the war on monuments in the past.