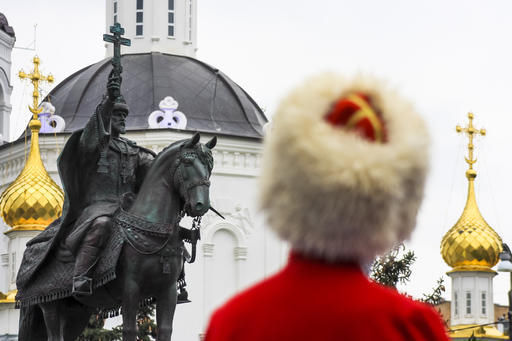 The ceremony to unveil Russia's first-ever monument to Ivan the Terrible took place in the city Oryol on October 14, Friday, the press service of the regional government told Interfax. The opening of the monument coincided with the Orthodox holiday - the Mantle of Our Lady.

The monument to the Russian tsar was installed on the embankment near the Cathedral of the Epiphany, at the confluence of the Oka and Orlik rivers, where Ivan the Terrible ordered to found the city of Oryol in 1566.

Russia's Minister for Culture, Chairman of the Russian Military and Historical Society, Vladimir Medinsky, sent a welcoming message to the residents of the city. In his address, Medinsky wrote that the installation of the monument to Ivan the Terrible in Oryol was "not only a tribute to the tsar and the warrior, but also a recognition of the continuity of all the stages of our history."

"Ivan IV the Terrible is one of the most controversial and, at the same time, one of the most outstanding figures of the Russian national history. During the years of his reign, he had taken a number of bold steps to strengthen the unity of the Russian state. He ran an administrative reform and started new government bodies; he created a professional army. Russia's first-ever book was published during his reign," Medinsky wrote.

Prior to the opening of the monument, the minister tried to justify Ivan the Terrible, who is known for his cruelty. He proposed not to compare the Russian tsar with well-known humanists, such as Mother Teresa or Mahatma Gandhi. Medinsky preferred to draw parallels with his contemporaries, who ruled in the XVI century in Europe. Medinsky said that on St. Bartholomew's Day alone, during the reign of Charles IX, 30,000 Huguenots were killed, while the years of the reign of Ivan the Terrible were marked with the killings of up to 7,000 people.

Governor Vadim Potomsky told Life, that the creation of the monument was funded by philanthropists and cost several million rubles.

Interestingly, the monument was originally supposed to be unveiled on August 3 in front of the children's theatre in honour of the 450th anniversary of the city. However, local residents expressed protests against the construction of the monument. Activists claimed that they did not want to see a monument to such an infamous historical figure as Ivan the Terrible in their city, let alone the location for it - next to the building of the theatre for children and youth.

In July, Governor Vadim Potomsky met with the protesters and said that the city authorities had no intention to canonize Ivan the Terrible. He stressed out that the plan was to unveil a monument to the man, who founded their city.

Nevertheless, the authorities decided to postpone the installation of the monument and conducted a survey among citizens. Some time later they reported that the majority of 400 respondents were in favour of its installation. Patriarch of Moscow and All Russia Kirill supported the idea to erect the monument to Ivan the Terrible.

The Fortress of Oryol was founded in 1566 on the orders from Ivan the Terrible to protect the southern borders of Russia. This year is officially considered the founding date of the city, as evidenced by the record of the event in the Nikonovsky Chronicle.