A sad date in the history of Russia - the shooting of the royal family - is drawing near.  Despite the investigation, neither the Russian Orthodox Church, nor members of the royal family recognized that the remains that were buried in the Peter and Paul Cathedral in 1998 were the remains of the family of Nicholas II. Pravda.Ru talked about the mysteries of the Romanovs family to Charge d'Affaires of the Russian Imperial House, German Lukyanov. 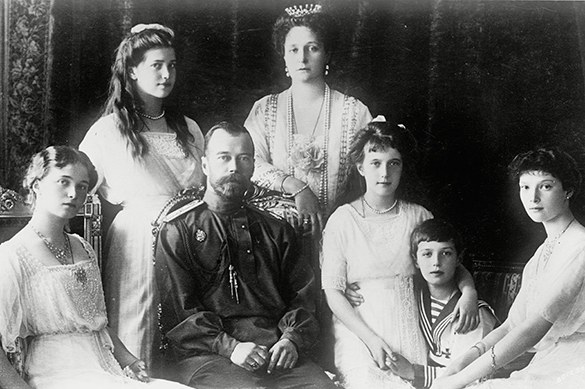 Bolsheviks executed Nicholas II and his family in Yekaterinburg

"On July 17, 1918, the Russian royal family was executed in the city of Yekaterinburg. After the emperor abdicated, he and his family were arrested. They were exiled first to Tobolsk and then to Yekaterinburg, where they were killed. It was  an act of murder without a statute of limitations.

"I was working with this issue as a lawyer of the Grand Duchess. First, the question was raised about whether the death of the royal family was registered. Numerous inquiries to all organizations of St. Petersburg and Yekaterinburg were made. The answers were negative - the fact of the death of those people was not documented.

"Everyone knows that a person receives a birth certificate in the beginning of their life, and when a person dies, a death certificate is issued. Nothing was issued when the Russian royal family was executed.

Also read: Russia and the beast

"The fact of death of the royal family was documented in 1996. The death certificate for Nikolai Romanov was issued saying that he died on July 17, 1918 at the age of 50 years. The book of registration of death contains record 151 from 10 July 1996: "Cause of death: executed in the city of Yekaterinburg, at the house of special purpose."

"Bolsheviks executed tens of thousands of people. They were destroying the cream of the nation. Bolsheviks were killing without trial, but the members of the royal family were an exception. There was a telegram to Moscow that said that the emperor was shot by sentence of the Ural Sovdep. The latter found Emperor Nicholas II guilty of countless incidents of bloody violence over the Russian people.

"The supreme body - the Presidium of the Central Executive Committee - considered the telegram and declared the execution rightful. Soviet leader Yakov Sverdlov made an extraordinary message at the Council of People's Commissars about the shooting of Nicholas Romanov by the verdict of the Ural Sovdep."

"Do you have all these documents at your disposal?"

"Yes, all of them that relate to this issue. The head of the Russian Imperial House, Grand Duchess Maria Vladimirovna, was studying and collecting all the necessary documents to raise the question of legal rehabilitation of her relatives, members of the royal family."

"Who was supposed to make a decision on rehabilitation?"

"By the law on victims of political repressions that was in effect at that time, it was up to the Prosecutor General Office of the Russian Federation to decide. When all the necessary documents were submitted, the Prosecutor General Office reviewed the application and denied rehabilitation, stating that there was no reason for rehabilitation. It was said that rights and freedoms had not been violated and the Soviet totalitarian Bolshevik state had had no relation to the death of the royal family. This was in 2005.

"After that, the grand duchess went to court to recognize the decision declining the rehabilitation of the royal family illegal. She wanted Russia to recognize the members of the royal family as victims of political repression. There is a law that states that political repression are measures that the state applies against persons for their affiliation to exploiting classes, depriving a person of their freedom, rights and life.

It was not the revolution that destroyed Emperor Nicholas II

"Bolsheviks did not expose the information about the evacuation of the royal family. They knew that the people of Russia and other countries would not accept that, even in those hard times.

Will Russia ever know the truth?

"They released the following notice: "Considering the fact that counterrevolutionary groups were approaching the red capital of the Urals, and the possibility that the crowned executioner could avoid people's trial, the conspiracy of the White Guards, who tried to kidnap him, was disclosed. The Presidium of the Regional Council, executing the will of the revolution, ordered to execute by shooting former Tsar Nicholas Romanov, comma, guilty of countless incidents of bloody violence against the Russian people on July 16 overnight, 1918."

"In fact, the royal family was executed in the basement of the Ipatiev House, where they were detained on July 17 overnight.

"After the execution, the bodies were removed, and attempts were made to destroy the bodies. The bodies were doused with sulfuric acid. The heads were allegedly shown in the Kremlin to Vladimir Ilyich Lenin. There is a version of a special room, where they found something, but it all remains a secret, and no one nows what was found.

"The question of the authenticity of the discovered remains is still open. There are accurate methods of medical genetics research, but science moves forward, and new circumstances may open."

"Will we ever learn the truth?"

"A lot has been done at this point, but the most important question remains open. This is a very complicated question, some things can not be solved at once. Russia has come a long way, and the Russian society is changing. We have all mechanisms, both legal and political ones for peace and consent in our society."