Russia's fifth-generation PAK FA T-50 fighter jet is a "flying robot, a smart plane," advisor to Director General of Radio Electronic Technology Concern, Vladimir Mikheyev said. The pilot does not play a significant role for the new fifth-generation fighter jet. The pilot, the official said, is "an integral part of the aircraft," RIA Novosti reports. 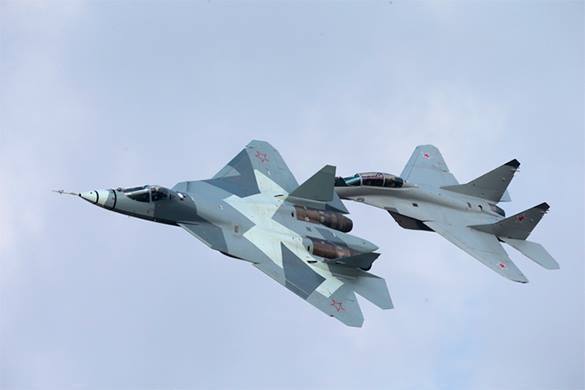 In addition to its advanced design, PAK FA has a number of other advantages over foreign aircraft. For example, PAK FA T-50 fighter remains maneuverable and stable at supercritical attack angles.

According to Mikheyev, the wing of the aircraft serves as the "active defense station "Himalayas"". The station is housed inside the wing and ensures not only flight, but also protection characteristics as it confuses enemy radars and conducts radio detection, Pravda.Ru reports.

In comparison with the US fifth-generation F-22 and F-35 fighter jets, the Russian T-50 has a more advanced guidance system of on-board weapons. This technique is known as "entry into enemy's rear hemisphere." In addition, the T-50 has a revolutionary technology of optical-radar detection. The new radar of the PAK FA T-50 is based on this technology and is thus superior to F-35 radars.

Russia's new fifth-generation fighter jet raises serious professional interest in the US military. At the same time, US officials fear that it will exceed similar models of state-of-the-art US fighter jets, Pravda.Ru says.

"The analysis that I have seen on the PAK-FA indicates a pretty sophisticated design that is at least equal to, and some have said even superior to U.S. fifth-generation aircraft. It certainly has greater agility with its combination of thrust vectoring, all moving tail surfaces, and excellent aerodynamic design, than does the F-35," former U.S. Air Force intelligence chief Lt. Gen. Dave Deptula told the National Interest.

Another senior US military official said that, in terms of performance, Russia's PAK FA "looks competitive" when compared with the F-35.

The head of the US Air Force Mark Welsh said that Russia and China were rapidly closing the gap with the US military technology.

"China and Russia are two good examples of countries who will be fielding capability in the next three to five years; if they stay on track, that is better than what we currently have in many areas," Welsh told Fox News.

Welsh acknowledged that China and Russia may outstrip the United States in the field of air force technology soon. The official called upon the US authorities not to cut spending on national defense, because "enemies" of the United States - Russia and China that is - may surpass Washington in air defense quickly, US Air Force Chief Mark Welsh said.

Mark Welsh paid an inspection visit to the US Air Force base in Langley, Virginia, where he was disappointed with the aging fleet of US fighter jets. According to the official, most countries prefer to purchase aviation equipment from Russia. If China joins these projects, the two countries will become serious competitors to the United States in already eight years, Welsh said.

Noteworthy, the ambitious project of the US Department of Defense to build Lockheed Martin F-35 Lightning II has found itself on the verge of failure. It was revealed that the engine of the aircraft was so unreliable that it could put the entire project into question, Pravda.Ru reports.

As a result of detailed inspections, it turned out that aircraft engines manufactured by Pratt & Whitney (a division United Technologies Corp.) were twice as worse as producers announced it to be.

Last year, the US military suspended the flights of the F-35 following fuel leak and fire during takeoff. For the same reason, the United States did not even send the new fighter to the air show in Farnborough in the UK last year.