Does anyone need 4th and 5th generation fighter aircraft?

Russia's Mikoyan Design bureau has been going through hard times during the recent years. Not that long ago, the  word "MIG" was a symbol of power of the Soviet military aviation. Nowadays, despite its glorious history, the corporation reports losses annually and becomes a regular recipient of government subsidies. 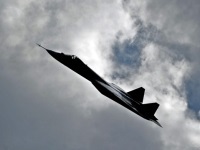 Perspectives on international arms markets are not encouraging either. At the end of 2011, there were contractual obligations to deliver 20 MiG-29 to Myanmar, 45 MiG-29K/UB for Indian aircraft carrier program, plus an order for the modernization of 62 MiG -29 aircraft for Indian Air Force and an order for 24 MiG-29M/M2 planes for Syrian Air Force.

The last of the above-mentioned contracts was dropped for obvious reasons. Another order appeared, though - 24 MiG-29K and 29K/UB for Russian deck-based aviation. Nevertheless, with such a skinny portfolio, MiG remains far behind its main Russian rival - Sukhoi.

In addition, competition on the export market has been extremely high these days. The crisis pushes the countries that either were part of the Warsaw Pact, or had agreements on military cooperation with the Soviet Union, to sell their stockpiles of military hardware and aviation, including used MiG-29 aircraft. Hungary has recently announced the sale of the last batch of these.

High hopes were pinned for a new model, but the MiG-35 - an outstanding representative of the "4 + +" class - has not been lucky on international markets for some reason. This aircraft has attracted widespread attention on the global air shows when it made its debut in 2007. However, it has not received one single serious contract. A crushing blow for the jet was the Indian MMRCA tender. The Russian fighter did not even make into the short list, losing to Dassault Rafale and Eurofighter Typhoon.

Experts and the media name various reasons for the defeat. If we talk only about the technical side of the issue, the majority tend to think that the Indian military declined the Russian jet over the RD-33MK engine, which is an upgraded version of the RD-33 from 1972. In addition, there were reports saying that India did not like Zhuk-AE radar system, even though it is promoted as a major highlight of the MiG-35. According to Russian designers, the radar system guarantees the jet victory in an air battle against any "4 +" fighter. Moreover, the radar system of MiG-35 makes it comparable to 5th generation aircraft.

If we talk about the reasons other than technical performance of the aircraft, then it appears that the motives of the organizers of the tender look completely unclear. MiG-35 would have cost less than its rivals ($10.5 billion for 126 aircraft, plus the transfer of licenses and technology). In addition, Indian Air Force and Navy already have about a hundred MiG-29 aircraft of various modifications. Therefore, purchasing a fighter that is generally unified with the 29th model would have promised extra savings.

Explaining such a strange turn of events, MMRCA experts tend to allude to India's desire to diversify its program of military cooperation. To put it in a nutshell, India tends to limit the dependence of the material part of its aircraft on Russian manufacturers, taking into consideration the existing contracts for the purchase of 230 Su-30MKI fighters and upcoming programs on the joint development of T-50/PAK-FA project.

It was expected that Russia's failure at the Indian tender would have a very negative impact on the prospects of the MiG-35 in Russia. This year, though, the Defense Ministry of Russia decided to purchase a trial batch of 24 fighters. What was it? Was it an order to "preserve the unique personnel" or a "trial balloon" before the decision to replace the remaining 200 MiG-29 in the Russian Air Force with a better aircraft? Time will tell.

As for the current state of affairs in Mikoyan Design Bureau, the failures that the company has been dealing with during the recent years are related to the specific development of Russia's military-industrial complex since Soviet times. MiG and Sukhoi were working in parallel on projects of light and heavy fighters the same way it was done in the United States.

The difference was about the fact that the Americans, when passing aircraft from various commercial manufacturers into service, required maximum unification on main components. This is how a dual control aircraft was born from the F-15 by Boeing and the F-16 by Lockheed Martin - they had a one and the same Pratt & Whitney F-100 engine. The U.S. Air Force not only managed to save on the transition to the fourth generation of fighters, but also simplified their future maintenance and upgrades.

In the USSR, the situation was somewhat different. Major design bureaus in the Soviet military industrial complex were more reminiscent of the property of feudal owners from the High Middle Ages. Both MiG, and Sukhoi could use the developments of only "their own" research institutes, rely only on "their own" production base and were engaged in a competition for the exploitation of resources of the planned economy.

The administration of the Soviet defense industry that was still thinking with the categories of the Great Patriotic War, was convinced that such a state of affairs was quite acceptable. Parallel production chains were seen as a mobilization reserve to dramatically increase military production in case of a large-scale war. Any future unification between Su-27 and MiG-29 in such circumstances was out of the question.

The Soviet Union could afford maintaining two independent systems of fighter aircraft, but the Russian Federation could not. Problems of the past put the two companies in "the winter takes it all" situation. The winner will have to fit into international arms markets.

Something like that was happening in the West too. The end of the Cold War led to sharp reductions in military spending; the new generation of military hardware  was many times more expensive than the previous one. The number of independent aircraft manufacturers reduced sharply, whereas other manufacturers joined their efforts to survive. An aircraft could exist if it could be exported. Everybody had to learn to survive on their own, without relying on government support.

Sukhoi entered the new period with the T-10 platform that could be modernized and modified to meet customer's needs. As a result "4 +" clones of Su-27 and Su-30 became in abundance on international markets, while MiG was languishing without significant international contracts for a whole decade.

In addition, the Su-27 was adopted after the MiG-29 and was delivered to numerous allies and partners in much smaller quantities. Sukhoi was playing on the field with no other players nearby.

An export model by Mikoyan, the universal light fighter MiG-29 CMT, did not justify hopes. Developers tried to embrace as wide a spectrum of potential customers and ultimately the plane turned out to be "for all and for nobody." Too heavy for its class, the MiG-29 CMT lost the flight characteristics relative to the original 29th model. It also carried limited ammunition and eventually became as expensive as Sukhoi heavy fighters.

In addition, the creation of a new aircraft required almost the resources of the company for the modernization of the RD-33 engine. MiG engineers later designed RD-33MK engine, which was installed on the MiG-35, with thrust vector control and extended afterburner. However, the trust of potential customers to the engine had been irrevocably undermined.

To crown it all, it turned out that the export MiG model had strong competitors in the markets of third world countries, particularly in the face of Chinese "dragons" J-10 and JF-17. With all their advantages and disadvantages, they had had a major and indisputable advantage in the eyes of buyers - the export price of Chinese aircraft was 10 million dollars less than that of Mikoyan fighters.

In fact, today's potential customer is lost in the wilds of brochures about fighters of "fourth" and "fifth" generation. They do not really understand what they are for. Yet, they are well aware of the fact that having such an aircraft in the fleet of their air force would certainly be prestigious, although it is : a) expensive, b) technically difficult.

If there is a question about the adoption of a system into service, the answer is hidden in the definition of a potential enemy, its technical capabilities and the cost of the equipment required to guarantee the execution of specific military tasks. Global trends are not a clue at all.

Based on this simple logic, aircraft on the 5th, and all sorts of "4 + +" generations will lose to more simple and cheaper solutions, particularly in the markets of the Third World. Technical complexity and versatility are surely able to provide for strategic advantage, but only in combination with a sufficient quantity. The latter will be impossible to reach due to the high price. Having invested heavily in a relatively small fleet of technically advanced aircraft, the air force of a small country is at risk of finding itself in this type of situation: "there will be no air support - the pilot fell ill."

The USA's refusal to use the F-22 during the Libyan conflict - "because the plane was not designed to attack ground targets" - forced many to think.

The assumptions above are partly supported by the behavior of potential customers at the recent Le Bourget Air Show. Customers were mostly interested in attack helicopters, UAV nEUROn and P. 1 HH Hammerhead, simple and inexpensive training and combat aircraft and all kinds of "flying tractors" like the American Archangel or the Brazilian Embraer Super Tucano EM 314B.

Meanwhile, China announced the completion of the work on the light combat training JL-10 fighter jet, which is to become the cheapest aircraft in its class - 10 million dollars against 15 million for Russia's Yak-130. Most likely, this is the type of aircraft that will determine the face of the international aviation market in the next few decades. Non-industrialized countries in Asia, Africa and Latin America, as well as private military companies, will be interested in such aircraft most.

Most likely, a crisis is in store for manned aviation against the backdrop of rising prices and increasing requirements for training of pilots. The number of countries that can afford modern piloted aircraft will inevitably decline. Sooner or later, this number will coincide with the number of countries-manufacturers. As a result, aviation producers will have to choose from either internal markets or a very narrow circle of several potential customers who will be able to afford to have and upgrade a fleet of "fourth" and "fifth" generation fighters.