The first 12 aircraft of the F-22 Raptor advanced tactical fighter entered service with the U.S. Air Force in mid-January 2006. The delivery of the new U.S. fighter triggered a heated debate regarding the U.S. technological superiority over the armies of other countries. Russia has traditionally built military equipment on a par with U.S.-made military machines. At times Russian military equipment exceeded the American one in terms of combat efficiency. In the meantime, Russia is about to complete a new fighter capable of competing against the F-22 Raptor. 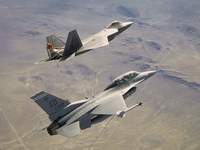 Experts say that the F-22 Raptor is a milestone in the development of the U.S. Air Force. The fighter is equipped with the radar that uses an active electronically scanned antenna array of 2,000 transmitter/receive modules, which provides agility, low radar cross-section, and bandwidth. The F-22 Raptor can fly at sustained supersonic speeds without the use of afterburner. The aircraft has a high multi-mission capability in ground attack as well as air-to-air roles.

The U.S. military information website Strategypage released a previously unpublished report by now defunct British Defense Evaluation and Research Agency. The report says that the F-22 Raptor is superior to Russia’s newest Su-35 fighter. A real combat casualty ratio between the F-22 and the Su-35 would be 1 by 10 at the very least. However, the report did trigger a gusher of euphoria in the U.S.

One F-22 Raptor costs $133.1 million while one Su-35 costs $30-$38 million. Even the U.S. can not afford such huge costs. To save up $2.6 billion for funding 180 F-22’s, the Pentagon has already cut 33 reconnaissance aircraft U-2 Dragon Lady, 55 strike aircraft F-117 Stealth (the entire fleet), and 76 passenger aircraft C-21 Learjet. The military also reduced the fleet of bombers B-52 Stratofortress by 40 percent. The USAF had an initial plan for purchasing 648 aircraft.

The F-22 Raptor was originally built for combat against similar enemy aircraft, which were built only in the Soviet Union/Russia. The lack of the enemy resulted in a decrease of the number of F-22’s purchased by the Pentagon. The USAF has recently conducted a joint exercise with the Indian Air Force. The U.S. F-15C/D’s simulated combat against several Russian-made Su-30MKi, MiG-27, MiG-29 and even pretty obsolete MiG-21 Bison, which defeated the U.S. “Eagles” totally and utterly. U.S. General Hal Homburg, head of the USAF Air Combat Command, said that the result of the exercise was a big surprise to the American pilots.

Commander in Chief of the Russian Air Force Vladimir Mikhailov said recently that Russia’s reply to the “American miracle” would be on the wing at the end of 2006. The demonstration prototype aircraft, designated I-21, has been successfully tested in a wind tunnel. The aircraft’s avionics and engine were on display at last year’s air and space show in Zhukovsky, near Moscow. Russian designers maintain that the avionics and engine of the new aircraft are not worse, and probably even better than those used in the U.S. aicraft.