Russia’s new T-50 PAK FA fifth generation aircraft performed its second flight on February 12. The flight took place at the airbase in the city of Komsomolsk-on-Amur. 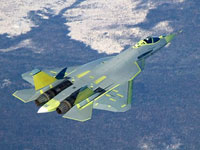 “The flight continued for 57 minutes; all systems of the aircraft functioned properly,” a source at the Russian defense complex told Interfax. The new plane has a new look now, the official added.

“Several days ago the plane was painted in gray and white camouflage colors of the Russian Air Force. The new colors made the aircraft look more menacing in the air,” the official said.

The plane will perform several other test flights at the base of Komsomolsk-on-Amur and will be thereafter sent to the Moscow region, where the main part of test flights will be conducted. The combat capacity of the fighter jet will later be tested in the Astrakhan region of Russia.

The first test flight was conducted on January 29. The general director of Russia’s legendary Sukhoi design bureau said that the first successful flight of the fifth-generation jet marked great progress for the Russian aviation technology. Test pilot Sergey Bogdan shared positive impressions of his experience on board the T-50.

Prime Minister Putin stated that the program to train crews for the new jet would be launched in 2013, whereas serial purchasing of the jet would commence in 2015.

The main distinction of the aircraft is the computer analysis of all information. A pilot receives the results of the analysis in the form of prompt messages, GZT.ru wrote.

Nikolai Makarov, Russian armed forces chief of staff, said that Sukhoi’s T-50 would have several advantages over its US rival – F-22 Raptor.

In addition, T-50 will be a lot cheaper than the US analogue, although the price has not been exposed yet, Makarov said.

Russian specialists believe that it would be incorrect to compare Russia’s T-50 and USA’s Raptor: their concepts are different, Nezavisimaya Gazeta wrote. For example, the Pentagon refused from the plans to make F-22 a highly maneuverable aircraft. US specialists believed that self-guided all-aspect missiles relieve a Raptor pilot of the need to attack an enemy from the back. In addition, the US jet can reach the enemy at maximum operating range, which is unreachable for missiles of other fighter jets.

PAK FA designers say that it is a multi-role jet. Therefore, the aircraft can be used as an interceptor jet or a bomber plane.

Russian specialists also said that F-22 had never been used in many US-led military operations, not even in Iraq and Afghanistan.

Raptor was originally developed as a heavy fighter jet to gain predominance in the air. That is why it is referred to as a multi-functional, rather than a multi-role plane. Most likely, the aircraft will be used in connection with unmanned combat planes and will then become a prologue to the construction of the sixth-generation aircraft in the United States.

The Americans are concerned about the preservation of their technologies, experience and knowledge in the field of aircraft-making. In Russia, such an approach to long-term planning in the development of new military hardware either does not exist or is kept secret, like it happened with the PAK FA program.