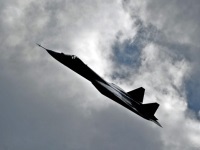 At present, Russia tests its fifth generation fighter T-50 (PAK FA). At the same time, experts believe that many European states will not be working on the fifth-generation combat aircraft - they will jump to the sixth one, in which primary attention will be paid to drones.

According to Peter Deinekin, Russia can not afford skipping one generation of aircraft after all economic difficulties. The development of the fifth generation fighter aircraft was inevitable.

According to him, one should not compare Russia with, example, France, which can buy fifth generation fighters from the United States. Russia must deal with such important developments independently, the former commander in chief of the Russian Air Force said.

"What is the current state of affairs in the Russian Air Force? Is there anything being done to upgrade the fleet?"

"I believe that the Air Force of Russia is having its second birth. After Russian switched to the market economy and changed the social order, the leaders of state were not paying much attention to the army, let alone the air force. Now the situation has changed. Substantial amounts of money are allocated for the development of military, tactical and long-range aircraft.

"The main problem is about general designers for the aviation industry now and for the heads of the Air Force. They should use the favorable situation that is emerging in this business in the near future. Enough with wiping tears, it's time to work."

"Newspapers quote your words about the development of sixth-generation aircraft in Russia, particularly unmanned aircraft. Is it really a trend?"

"I would not take the liberty to say that the focus will be made on drones. For many years ahead, manned combat aircraft will remain a reliable weapon. The future is for drones, but in the coming years, they will not be able to take the initiative from piloted aircraft.

"Russia has been using drones for several decades. However, they are not used widely, because over the last 20 years Russia experienced a period of stagnation. Now we are trying to catch up with these shortcomings."

"From time to time, the question arises of the shortage of pilots for civil aviation. It is a problem for the Air Force? What is going on with flight schools in the country after a series of reforms and mergers?"

"The problem of training military pilots and pilots for civil aviation in our country has been a constant problem, regardless of the state system. There were initiatives to train 100,000 pilots, which would then be replaced with dismissals of thousands of first-class pilots.

"And now we are reaping the benefits of the reductions of the armed forces in the 1990s. This failure in the system of training has echoed back now. We now we are experiencing a strong shortage of pilots in both civil and military aviation.

As for the civil aviation, it has 15,600 pilots, 7,500 of whom are captains of aircraft. The number of graduates of educational institutions of civil aviation has been growing. This year, up to 940 people are to graduate, but 400 pilots, Russian citizens, are still unemployed.

"At the same time, there are "advanced" managers of some airlines, who continue to believe that they can get their pilots from government agencies. There is a draft decree being considered now in the government on hiring foreign nationals as captains of aircraft. Associations of civil aviation are strongly opposed to the idea, but it has been buried yet.

"As for military pilots, the Air Force will need about a thousand pilots for helicopter aviation in the coming years. This task is quite feasible for our schools."

"What is the most serious problem for Russia's Air Force today, or can it appear in the future?"

"It is personnel training and development of new aircraft. The problems of financing new developments have been solved, the Ministry of Defense has changed its attitude to people for the better. It is now up for Air Force personnel. They have all the rest: kerosene, flights and new equipment. I wish them the clear sky, good health and success in combat training."