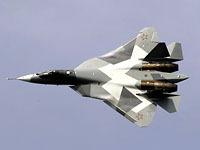 Russia's new fifth-generation PAK FA T-50 fighter jet performed its first demonstration flight at MAKS-2011 international air and space show in the town of Zhukovsky, near Moscow. The flight was conducted for the arrival of Prime Minister Putin at the show.

Putin had an opportunity to take a close look at the aircraft to see that hundreds of millions of rubles invested in the project had not been wasted. The designers of the new fighter jet say that the performance of the T-50 exceeds the US analogue. However, the USA is about to unveil something new for this class of aircraft.

Two T-50 jets appeared in the sky above Zhukovsky at 16:00 o'clock yesterday. The jets performed aerial stunts and then landed.

The official press release says that the T-50 will combine the functions of the assault aircraft and fighter jet. The aircraft is equipped with a new complex of avionics which integrates the electronic function and a prospective phased-array radar. The new equipment gives the pilot an opportunity to concentrate more on the execution of combat tasks, the Rossiiskaya Gazeta wrote.

The on-board equipment allows to exchange data both with mission control centers and within the aviation groups in the air in the mode of real time. The use of composite materials and innovative technologies, the aerodynamic configuration of the aircraft and engine signature reduction measures provide the unexampled low level of radar, optic and infrared signature.

The Russian fifth-generation aircraft can be compared to the USA's F-22.

"One may say that the T-50 exceeds the foreign analogues on certain specifications, the maneuverability, first and foremost. The artificial intellect system will also surprise the competitors," official said.

For the time being, there is only one fifth-generation aircraft in the world - the US F-22 Raptor. The tests of the Raptor were launched in 1997. The jet was passed into service in 2005.

Unlike the F-22, which uses stealth technology, 85 percent of the surface of Russian T-50 is covered with unique nanotechnological materials that decrease both the visibility of the plane and the air drag. The technical specifications of the missiles for the jet exceed the analogues of the US aircraft. In addition, the T-50 can fire the missiles hidden in internal departments at hypersonic speed. The US fifth-generation aircraft can not do this and has to decelerate for the purpose.

In the meantime, the USA continues the development of a new fifth-generation aircraft - F-35. The new plane can be passed into service in the United States in 2016.

According to experts' estimates, the value of all contracts that can be concluded during MAKS-2011 air show may exceed $10 billion. Sky Aviation of Indonesia signed the contract worth $380 million during the first day of the show to purchase 12 Sukhoi SuperJet-100. The liners will be delivered to the customer before 2015.