"Instead of fighting in Ukraine, Russia should lead the international coalition to conduct a ground operation against the Islamic State in Iraq and Syria," an analyst with Meru Capital Group said. This would be a very beneficial move for Putin, the author of the "fresh" idea believes. Putin could thus rehabilitate himself in the eyes of the West, whereas the latter would help Russia overcome economic difficulties." What is this? This is nothing but an attempt to drag Russia into a military conflict with the Islamic world. 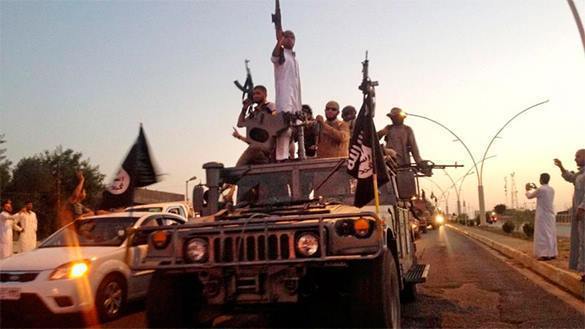 "The successful implementation of this unconventional solution could elevate the perception of Putin as a global leader and restore Russia's now-pariah status within the G8...This solution would be an elegant way for him to rewrite the history books and secure a firm place as a global leader who made a material difference during a critical juncture for the world," Guru Ramakrishnan wrote in the article titled "Putin must make war, but not in Ukraine" posted on South China Morning Post.

According to the author, Russia may return to the Group of Eight, and the West would lift the sanctions that were imposed on Russia after the "annexation" of Crimea. "The lifting of economic sanctions would give Russian banks and corporations the flexibility to access the debt capital markets and secure dollar funding," the author also wrote. It appears that Mr. Ramakrishnan wrote the article to confirm his reputation of a fine economist.

What should the Americans do? They should do nothing but support the Russians with state-of-the-art American technology. Perhaps, it goes about logistics and bombings. "Outsourcing this battle to a UN/Russia-led coalition solves US President Barack Obama's difficulty of having to commit American ground troops and getting involved in another expensive war," the author writes. What touching care the author shows for American soldiers and Mr. Obama!

Mr. Ramakrishnan also finds direct and indirect allies for Russia in a ground operation. "Syria and Iran will agree to such a coalition on account of their long-term relationship with Russia and their immediate need to remove Islamic State from their own backyards," the article says.

Once the ISIS threat is eliminated, the UN must ensure the withdrawal of Russian troops from the Middle East. "It's worth remembering that the last time US and Russia worked together, during the second world war, to fight a common enemy, it resulted in a victory for the Allies," the author triumphantly concludes, apparently seeking the title of a respectable historian as well.

A cool plan that is, is not it? The readers of the Chinese newspaper readers liked it.

"This is a practical, simple and elegant solution that helps pretty much every party involved in this scenario. Putin is in desperate need of a victory at the moment and this platform would allow him to not only restore his flagging reputation, but also solve one of the more pressing problems in current global politics. Bravo!" a comment underneath the article says.

There are also those who share a different point of view. "Odd, isn't it, that both ISIL/ISIS in Iraq and the junta in Ukraine are creations of the "exceptional" USA, yet its Bad Boy Russia that needs to sort it out," another poster wrote.

We can add our own question here too. Obama is destroying Russia through Ukraine and declares Russia one of the largest threats to the world along with the Islamic State. Can this be a platform for negotiations?

Why doesn't Mr. Ramakrishnan care much about the fate of Russian soldiers? Is it too high a price - to give the lives of many Russian men for the sake of lifting the sanctions, from which Russia benefits? As for Putin's reputation ratings, they are already high in Russia. Why should Putin work to reduce them? The last but not least - why should Russia quarrel with the Islamic world, where her position is very strong?

Of course, Russia is concerned about the rapid offensive of Islamists from the Islamic State. President Putin signed a decree introducing a special position at the Ministry of Foreign Affairs to counter terrorism.

FSB Director Bortnikov said that about 1,700 mercenaries from Russia fight in Iraq and Syria in the ranks of the Islamic State. The threat is clear, but Russia can handle it alone. The West offers cooperation in an ugly form, so how can one cooperate with the Americans?

Here is an example of such cooperation based on the story of Tamerlane Tsarnaev  - a suspect of Boston Marathon bombings in 2013. According to The New York Times, the FBI was conducting investigation in relation to Tsarnaev in 2011. Russia's FSB was providing information about Tsarnaev to the FBI, but the latter, for some reason, assumed that Tsarnaev was much more dangerous for Russia than for the United States. The FBI simply left him alone.

When American special agents arrived in Russia within the scope of the Boston bombings investigation, they tried to recruit a Russian officer - in broad daylight, so to speak.  Make you own conclusions and judgements.

"Russia does not refuse to cooperate with the West in the fight against the Islamic State," Vladimir Sotnikov, a senior research officer at the Center for International Security, the Department of the Middle East at the Institute of Oriental Studies told Pravda.Ru. "It all depends on what causes such proposals. If they are based on pre-impossible conditions on the part of our Western partners, then this cooperation will work to the benefit of one side only."

It is, of course, surprising that a Chinese newspaper publishes such articles. Therefore, I would like to remind our Chinese comrades of their own take about the monkey that was watching two tigers fighting for prey. When the tigers killed each other, the monkey came and took the prey.

If Islamists of all types and sorts, while killing each other, block the way to oil tankers from Saudi Arabia and the Emirates to Europe and America, Russia would benefit from rising oil prices.

"The West wants to lure Russia into another trap, - Nafigullah Ashyrov, Mufti, Chairman of the Spiritual Administration of Muslims of the Asian part of Russia said in an interview with Pravda.Ru. - Today, unfortunately, the West wants to give Russia the image of a destroyer of the Islamic world. However, it was the West that gave rise to those movements. The Arab and Islamic world have always viewed Russia as a friendly country, which Russia has repeatedly confirmed."