Islamic State is not just a threat to the West, it is a threat to Humankind. Its radicalism depends on the perversion of Islam, the manipulation of the message of Allah through Mohammed, the dessecration of the Holy Book, the Qu'ran, blasphemy against Islam and the spreading of hatred to engender violence. Handle IS like you handle a snake. 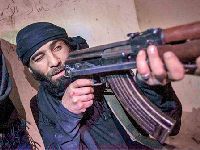 President Barack Obama recently warned against exaggerating the threat posed by Islamic State. This is a mistake. Islamic State may be on the defensive in Iraq and Syria but it has just abducted 91 Syrian Christians and in the last year has murdered over ten thousand civilians, as it proceeds to commit ethnic and religious cleansing. Islamic State is also taking advantage of the chaos in Libya and is today opening fronts in other regions. Next stop, Pakistan.

Islamic State has perpetrated massacres of men, women and children as it destroys whole communities which are not Sunni Moslem in Iraq and Syria - the Turkmen, Shabaks, Christians, Yezidi, Sabaeans, Kaka'e, Faili Kurds, Shi'a. Nine months after Islamic State marched into the northern Iraqi city of Mosul, the massacres continue. The UN High Commission for Human Rights claims that the outrages may amount to counts of genocide, war crimes and crimes against humanity.

Nikolai Mladenov, UN Special Representative of the UN Secretary-General for Iraq, states that "We have done a number of these reports (since Mosul) and we continue to register day after day horrible, horrible atrrocities". Among these is the murder of small children for "religious crimes".

As with any crisis, there is a tendency to draw the time line at the point from which you aim to begin. Drawing it when the Islamic Caliphate of Iraq was proclaimed in 2006 is a mistake. Drawing it when Abu Musab al-Zarqawi founded the Organization of Monotheism and Jihad, Jama'at al-Tawhid wa-al-Jihad in 1999 is also wrong. We must draw the line in Iraq at a point marked by March 19, 2003, when the US-UK led alliance invaded a country with such a complex ethnic and religious composition, outside the auspices of the UN Security Council, without understanding what they were doing. It was an invasion based upon lies, hypocrisy and stupidity, it was an invasion in which the West committed war crime after war crime, left swathes of territory contaminated by Depleted Uranium, murdered Iraqi families and destroyed civilian structures with military equipment.

We must draw the line in Libya on March 19, 2011, then the FUKUS coalition (France, UK, US), launched a military operation against the Jamahiriya, committed more war crimes and totally destabilized the country, and we must draw the line in Syria in early 2011 when the West started to fund, arm, aid and abet (mainly through its allies in the Gulf) groups which destabilized the Government of President Bashar al-Assad.

And into the void stepped Islamic State.

Where is Islamic State coming from?

I get where Islamic State is coming from. I have seen some recruitment videos and I understand the logistics of such organizations. At the top you have the leadership who sow the seeds of a cause to garner support and make a very comfortable living out of the benefits reaped (easily) through the dissemination of lawlessness. More than a regular terrorist organization, Islamic State has the hallmarks of a State in the areas it controls, implementing Sharia Law while its foot soldiers wield total power over the citizens unfortunate enough to be caught up in this nightmare.

I also get where the Jihadis are coming from, the boys and girls sitting in their bedrooms, looking for some glamor and some glory in the drab life the market-based economy has visited upon them, living in an eternal web of austerity probably with no studies, jobs or futures. These recruits are not your go-getters who work double shifts to get more money, who take extra classes to gain skills. They are your couch-potato, easily-led, no-lifers looking for an easy option and waiting for someone to sell them a dream.

And up pops Islamic State, the dream seller.

But there are dreams and nightmares. Nowhere in the Qu'ran does it state that it is legitimate to murder people simply because they are not Sunni Moslems and indeed, the entire philosophy of Islamic State is based around hatred at the humiliation meted out by non-believers. The strategy is exactly the same as those who encourage sects to form and then commit collective suicide because some space ship hiding in the tail of a comet is going to take them to another planet, or the Mormons who start their visit with carefully chosen quotes from the Bible.

What I do not get, at all, is how people can be so cruel and how youngsters can throw in their lot which what can only be a bunch of psychopaths who have crawled out from under rocks in the darkest corners of Hell. Suppose Islamic State showed in its recruitment videos what it really does, so instead of showing young men running along a beach and then sitting looking defiantly at the camera with stupid expressions on their faces as their leader screams diatribes aimed at engendering hatred through evoking some imagined shared experience, why doesn't Islamic State show videos of its foot soldiers shooting a woman in the head because she was wearing a red jacket, why doesn't Islamic State show video footage of the boys it murdered because they were not Sunni Moslems, why does Islamic State not show its "Jihadis" raping Yazidi girls or forcing nine-year-olds to have sex with them?

The West removed the people who were standing up against this scourge and having done so, created the space for something of this nature to appear. The West stands shoulder to shoulder with powers in the Middle East who have used Islamic State to wave the flag of Sunni Islam against the influence of the Islamic Republic of Iran (Shi'a) in the region. This does not, however, give Islamic State the right to wage war against innocent citizens going about their lives in Western countries any more than it gives them the right to perpetrate Satanic acts against civilians in Iraq, Syria and now, Libya.

How to deal with Islamic State?

History teaches us that sooner or later, extremist groups such as terrorist movements lose the flame of their cause as dialogue takes place and acts of violence are exchanged for a place on the political stage. These days, eavesdropping technology has rendered the use of hi-tech telecommunication meaningless, so the only communications which cannot be intercepted are those written on pieces of brown paper with pencils and carried by a boy riding a donkey or a bicycle. History teaches us that the population at large does not bow down in fear and cease performing its daily activities. People become more watchful and vigilant, people report suspicious packages to the authorities and probably if a Jihadi suicide bomber is caught by the public, (s)he will get kicked to death on the street before a police officer can come to the rescue.

The net is today closing around those funding or arming Islamic State, the territories it controls will be assaulted by air, land and sea as special operations take place behind the lines. If Islamic State were a viable alternative, creating a viable and sustainable means of living, upholding human rights and implementing the very noble lifestyle described in the Qu'ran, a beautiful book, upholding the precepts of Islam, which is a peaceful religion, then it would have its place on a political stage as a socio-economic movement which had something to offer. But it doesn't. Murdering and raping children is Satanic, period. And it is not Islamic.

Therefore my advice to those who have meddled and interfered in complex societies overseas, is don't. My advice to the leaders of Islamic State is to stop ruining people's lives, stop spreading hatred, stop murdering little boys, stop raping little girls, stop enticing young people away from their families by selling them a dream which does not exist. Start reading the Qu'ran, from cover to cover, start realizing that Islam is a religion of tolerance and peace. And practise Islam.

The type of society which Islamic State professes has no place in a globalized world of common values and basic human rights. True, the West has collectively acted like a pariah over the centuries and has done nothing in the 21st century to change its image. But this does not mean that setting up a Medieval society based upon principles of barbarity and butchery is any better.

The way to handle Islamic State is to treat it like a snake: ensnare the head.