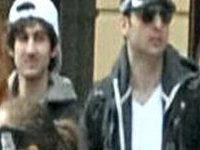 Dzhokhar Tsarnaev, who was formally charged with terrorist attacks in Boston, said the chief inspirer and organizer of the bombings was his elder brother Tamerlane.

Tsarnaev Jr., who was seriously injured during the arrest, is currently staying in a hospital in Boston. The District Court of Massachusetts arranged a teleconference to the hospital room, where Dzhokhar stays, to have the suspect participating in the trial.

Tsarnaev had had his vocal cords injured, so he could answer questions in writing and nodding. According to the court, the 19-year-old suspect planned the attack together with his brother and had no connection with any terrorist groups.

Judge Marianne Bowler read the rights to the suspect and announced that Tsarnaev had been charged on several counts, including mass murder. The charges stipulate death penalty or life imprisonment. In response, Dzhokhar nodded.

"Following the meeting, I can conclude that the suspect is conscious, sane and understands the nature of the charges against him," said Bowler.