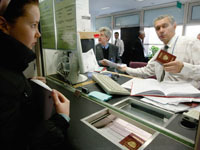 The situation with issuing British visas to Russian citizens still remains a tense one. One may not say that the British Embassy is friendly to those Russians who want or need to visit their country. Now the embassy has stopped issuing visas because of technical problems.

"We are seriously concerned about the fact that because of technical malfunctions in the work of the consulate office of the British Embassy many people experience very big problems. It goes about tens and even hundreds of people, who suffered moral damage because of that," Konstantin Kosachev, the chairman of the State Duma committee for international affairs said.

"These technical problems occur against the background of the policies of restraint about visas, which the British side has been practicing during the recent years, since the so-called Litvinenko's case," the official added.

According to the official, he does not understand, why the British try to connect these two absolutely different issues.

"From our point of view these two subjects do not relate to each other. Of course, we are interested in solving Litvinenko's case and punishing the guilty, whoever they are. However, it is inadmissible to make other people hostages of this criminal case. They just want to cross borders for educational, cultural, scientific and political interests," Kosachev said.

Russian Foreign Minister Sergei Lavrov also said that one should not connect the visa issue with Litvinenko's case. Britain's David Lidington, the Minister of State responsible for European issues and NATO, stated that Britain could resume the talks with Russia about easing the visa regime with Russia only after Russian national Andrey Lugovoy goes on trial in London.

Britain accuses Andrei Logovoi, a deputy of the Liberal and Democratic Party of Russia (LDPR), of being involved in the murder of Alexander Litvinenko, a former FSB officer, in 2006.

Russian citizens do not see the connection between visas and Mr. Lugovoi either. Now there are technical problems in the British Embassy in Moscow, although British diplomats have not been friendly towards Russian travelers recently. The humiliating problem of the process to receive the visa to England, as well as numerous unfounded refusals to people have made many Russians rethink their plans to visit the UK.

Many Russians are particularly concerned about the fact that they have to undergo the process of dactylography. Moreover, people must fill in all the documents only in English. Consulate offices of the majority of all other countries accept questionnaires and other documents written in Russian.

It is humiliating indeed that people have to use a foreign language in their homeland. This rule violates the Constitution of Russia and the Federal Law "About the Russian Language." The law says that the only state language on the entire territory of the Russian Federation is Russian (except for the national regions where the language of a title nation is the second state language).

The fact that the English language virtually acts as the language of international communication does not give it any preferences at all. English is no different from any other language of the world from the legal point of view. Just try to imagine what would happen if the consulate office of, let's say, China would make Russian travelers fill in visa forms in Chinese.

It just so happens that Great Britain violates Russian laws as it tries to put pressure on Russia just because a Russian citizen offended against the law on the territory of Great Britain. It appears that Britain does not see any problem about it.