Russia can only dream about visa-free travel to Europe 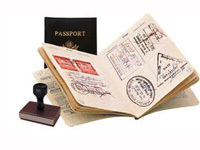 The Russia-EU summit opened in Brussels. President Dmitry Medvedev represents Russia at the summit, whereas Belgian Prime Minister Yves Leterme, EU President Herman Van Rompuy and European Commission President Jose Manuel Barroso represent the European Union. The parties will discuss a variety of issues at the summit, but the question about the cancellation of the visa entry regime between Russia and the EU is not going to be one of the most important ones on the agenda.

The question about the free traveling of people from Vladivostok in Russia's Far East to Portugal's Lisbon has become one of the most important and painful problem in the relations between Russia and the European Union. The question was raised for the first time in 2002 by Vladimir Putin, when Poland and Lithuania joined the EU. The EU membership for these two countries created serious obstacles for the residents of Russia's Kaliningrad enclave, who need to travel between the enclave and the main territory of the Russian Federation on a regular basis. The problem developed from the regional to an international scale afterwards, when officials started looking for a way to relieve thousands of people of the need to receive visas.

The treaty to simplify the visa regime between the Russian Federation and the European Union was signed in 2005. In accordance with the document, officials, entrepreneurs, students, graduates, activists of culture, science and sport obtained the right for simplified visa issuance. Several categories of top officials were allowed to travel between Russia and the European Union freely, without any visas at all. The cost of the consular fee was fixed on the level of 35 euros.

However, the majority of tourists and the people, who travel back and forth on private and business invitations, did not see any improvement. To receive a visa, many have to have their names registered on the list 1.5 months in advance, collect eight papers, find time off work to submit the documents, go for the interview and then wait to have their passports stamped. Using the assistance of travel agencies entails extra costs, plus, no agency can guarantee that the visa will be issued.

The presence of the Schengen wall did not improve the relations between Russia and the European Union either. Fernando Valenzuela, the head of the EU delegation to Russia, stated several days prior to the summit that Russia and the EU would discuss concrete steps aimed at scrapping the visa regime.

"I think issues of visa-free travel [between Russia and the EU] will certainly be on the agenda of the discussions. The discussion is likely to focus on two themes - determining concrete steps to introduce visa-free travel, as well as easing the existing visa regime to make travel simpler and cheaper, both for EU citizens and Russians," the diplomat said.

It sounds diplomatic, but as a matter of fact, it looks like a declaration of intentions. The Spanish official preferred not to specify any dates. "Setting any dates artificially will not help," he added.

Russia's representative to the EU, Vladimir Chizhov, has recently stated that the Russian citizens should receive new biometrical passports because the EU may refuse to issue visas for those holding old passports without microchips.

Dmitry Medvedev, Vladimir Putin and Silvio Berlusconi said at the meeting on December 3 that the visa regime must be canceled by 2018, when Russia hosts the World Cup. It is worthy of note that Russia is ready to invite European guest for the World Cup without visas. However, the EU has declared no similar intention in return.

Great Britain, Denmark, Latvia and Estonia do not want to hear anything about the abolishment of the visa regime with Russia. This idea finds support among influential official in Germany, France, Finland and many other European countries. The list of Russia's allies at this point may only include Greece, Cyprus, Italy, Spain and, strangely enough, Poland.

Viktor Mironenko, an expert with the Institute for Europe of the Russian Academy of Sciences, believes that the visa regime will be liberalized.

"It will happen, without any doubts, for economic and political ties. It seems that the World Cup 2018 will be the time, when the visa regulations must be canceled. One may say that there is some progress about the problem. Negotiations are taking place, slowly but surely. One can outline several stages in easing the visa regime linking them with major sports events. The first stage is the World Cup 2012 in Ukraine and Poland. The second stage is the Winter Olympics in Sochi in 2014. The third stage is the World Cup in Russia. This is only just a wish, though. The real process to cancel visas is a very long one. The European Union is not prepared for it today. In Western Europe, many are still concerned about the first expansion of the EU, when Germany, France and Holland were inundated with natives of Central and Eastern Europe. Therefore, many Europeans are awed at the thought of opening borders for Russians.

"To make the talks faster, Russia should join efforts with Ukraine. The Russian-Ukrainian relations have improved greatly recently, and Ukraine is currently in talks with the EU about the same visa problem. It does not mean, of course, that Russia and Ukraine will convince Europe of the need to cancel the visas, but it is easier to have a group effort at this point," the expert said.