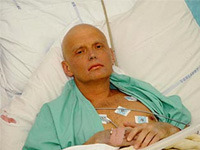 Four years ago, on November 23, 2006, Alexander Litvinenko, a former colonel of the Federal Security Service (FSB), who escaped to Great Britain in 2000, died at a London hospital. "The leading critic of Putin's regime," as the Western media dubbed Litvinenko, has apparently left very little memories for those who supported him. Not even an article or a post written by "critics of the Kremlin regime" appeared anywhere on the date commemorating four years since Litvinenko's death.

We are not going to say that everyone has forgotten about Litvinenko, of course. In Britain, they often recollect the fact that the country's relations with Russia were complicated considerably because of Litvinenko's case. Russian officials respond saying that Moscow is ready to cooperate, albeit on the base of Russian laws. The British do not accept such an offer, but this is a problem of the United Kingdom, not Russia.

Alexander Goldfarb, an associate of disgraced Russian oligarch Boris Berezovsky (Litvinenko was working with Berezovsky as well) had his own peculiar way to remind everyone of the former FSB colonel's death. Goldfarb was the one, who unloaded the openly fake story about polonium-210 to The Sunday Times.

It is an open secret that there is a certain category of people in Russia. Those people seem to know everything and blame the authorities for everything that may happen in the country. Such people are especially active in blogs and several online publications. Nevertheless, there was not even a single article or a post made about Litvinenko's death anniversary.

For example, here is what then-State Duma deputy and currently one of the leaders of People for Democracy and Justice liberal coalition, Vladimir Ryzhkov, said on November 24, 2006:

"I don't doubt that this is a political assassination, which was most likely ordered and conducted by Russian special services, because it was them, whom Litvinenko attacked in his speeches and books. He particularly accused FSB of orchestrating apartment buildings explosions in Moscow in 1999, and he provided many arguments to prove that. If we look for a motive and the interested parties, I believe that it was the special services that were interested in his death most. If the criminals are not found, the clients and executors can be temped irresistibly to use that poison and that scheme against other opponents. That is why everyone must be interested in completing the investigation entirely. The chain of political assassinations will continue otherwise," Ryzhkov said.

Yulia Latynina: "This is a catastrophe. I think that this is one of the crucial moments for the future of Russia's image in the world, which has been worsening speedily lately. It's very hard to talk to the country, in which political opponents are poisoned with thallium or something else. Several events have taken place during the recent two months. We woke up in a different country every time as a result of those events: after the story with Georgia, after the assassination of Politkovskaya and after the assassination of Litvinenko. Every time it was not just somebody; every time it was the power, in this or that form. And this is very frightening," Russia's opposition journalist and writer said.

These are just a couple of examples. The choir of denunciators was much stronger in November of 2006. The echo even reached Hollywood, where they intended to make a film about Litvinenko's poisoning and the return of the evil KGB. They eventually scrapped the project, though.

Denunciators still do the same things that they were doing four years ago - they denounce. And it seems that they know all the answers to the questions of who, when, why and what for.