War is peace; slavery is freedom; ignorance is strength 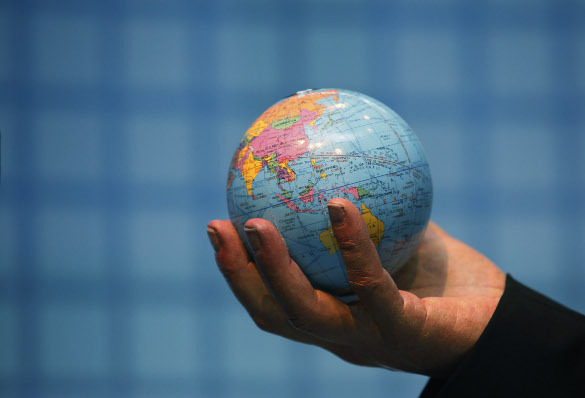 For maybe 15 years the Internet has been buzzing (discreetly) about the prospect of a 'pole shift' in our near future. Just how near, no one knows. But, there are indications it has happened in the past, therefore could happen again. Some think it will merely entail a reversal of the magnetic polarity; others say it will be a catastrophic shift of the geographic axis. Who knows? But one thing is observable right now-- the human sphere has been undergoing a radical shift in moral compass for a generation... and the results appear disastrous.

SVB:7:18 ...It will come in the Days of Decision, when men are inflicted with spiritual blindness, when one ignorance has been replaced with another, when men walk in darkness and call it light.

SVB:7:21 Hear my voice, for I tell of things to come. [...] In those days men will be falling away from manliness and women from womanliness. It will be a time of confusion and chaos.

Isaiah 5:20 Woe to those who call evil good, and good evil; Who substitute darkness for light and light for darkness; Who substitute bitter for sweet and sweet for bitter!

War is peace; slavery is freedom; ignorance is strength!

With astounding prescience, Orwell had it right, in a novel written more than half a century ago. Within a lifetime of the novel's release, almost everything it envisaged has come about. In particular, the inversion of our moral compass, the reversal of our values, is egregious. Using the power of the mass media combined with the exploitation of human psychology, the hidden manipulators have, in one generation, changed the moral landscape of a society. That society is the so-called Western civilization, originating in Europe and achieving its dubious epitome in America, with outposts in Australia and New Zealand.

To the extent that other societies have emulated Western civilization (e.g. Japan, India, now China, etc.) they also are experiencing an overturning of their traditional mores and values.

The objective observer is amazed at how effective is the insidious and relentless attack on traditions that brought 'the West' to a pre-eminent position in terms of material success. In like fashion, the reversal of those traditional values will certainly bring material ruin in the wake of the ongoing moral ruination.

In other essays, I have written, as have a few others, on the remarkable (to us) way that the elite running society have been able to re-engineer the beliefs and perceptions of a sizable majority of the population. Things that were once forbidden to display or discuss publicly are now in our faces (e.g. quasi-nudity on TV, sex-ed in primary school, etc.). And freedoms we once took for granted are being removed under a strict regime of 'political correctness,' and where that seems inadequate, by outright legislation (e.g. any hint of criticism of Jews or Israel; mere lack of support for the 'LGBT' agenda).

People of my generation (leading edge of the 'baby-boom') feel like strangers in a strange land. Sure, many appear to be coping marvellously by simply going along with the program. Hey, why rock the boat? We have to just accept each others' differences, is their reasonable-sounding rationale, just as prompted by the media manipulators and academic savants. Yet, too often it seems that tolerance is a one-way street, and the tail now wags the dog.

It's easy to just pretend that the 'good parts'-- the new 'openness' and 'acceptance'-- make the changes all worthwhile, and ignore the 'bad parts'-- the restrictions on speech and even thought. Most people can't seem to project a trend into the future if their life depended on it. If today the government takes away a freedom from some group identified as terrorists, who's to say when they'll subtly change the definition of that group so that it now includes a wider membership... maybe people like you?

So it goes, in every sphere of life. The 'entertainment industry' is all about normalizing the perversions and transgressions so that they not only do not shock us, but they become regarded as the norm. Prime-time television these days will show almost anything, as long as it's preceded by the standard warning message that 'this program contains scenes that may be disturbing to some; viewer discretion is advised.' Of course, such messages serve more to whet the appetite of viewers who've already been pre-acclimatized by previous, less-offensive programming.

The 'history' we are taught is largely self-serving clap-trap, spinning anything resembling a fact into another component of the 'white Anglo-European' mythology of righteous wars fought by the good-guys to preserve decency and democracy from some evil dictator with designs on our precious freedoms. 'We' (actually our overlords, if we bothered to think) have memorialized our cherished lies with monuments, medals, annual ceremonies, and the like, elevating them to sacred cow status. To question these touch-stones of mythology is to invite harsh sanctions as a lunatic or a heretic.

Our environment itself is being modified by various modes of 'geo-engineering' (e.g. chem-trails, strip-mining, deforestation) whose full, cumulative effects are yet to be seen, but which impact agriculture and the ecology, and thus, our very source of food and water.

Companies like Monsanto want to replace many of our traditional sources of food with their 'bio-engineered' substitutes... without ever properly demonstrating any benefit, or doing scientific, long-term tests of the effects on human health. It seems like a madcap rush to insert artificial products in place of nature's originals.

At the core of human psychology is our sexual identity; and predictably, it is under attack as never before. There are men wanting to be women, and women 'identifying' as men; and the medical technology ready to perform the surgeries necessary to do a superficial transformation. In between are the transvestites, bisexuals, 'transexuals,' etc. who add to the general confusion of the Age. Celebrities like Bruce/Kaitlyn Jenner are lionized for their 'bravery' in switching their birth sex. Others, like Angelina Jolie, are also lauded for rejecting their sexual attributes thru 'prophylactic' surgery. It's as if some negative zeitgeist is inducing people to abandon the sexual nature they were born with.

The very essence of our humanity is now under attack by the science (so-called) in thrall to this satanic agenda. One school of technicians is madly tinkering with our DNA in the vain attempt to improve on the Creator's handiwork, but of course, under the pretext of seeking to eliminate various diseases. Another bunch is going even beyond the biological, (aptly called 'trans-humanism') wanting to integrate electronic and mechanical prostheses into the human body in pursuit of improved performance and longevity (see e.g. Kurzweil on 'the Singularity.')

Now the US Supreme Court has issued another ruling that represents a tectonic shift in the moral and legal fundaments of the USA, with their decision that all states must recognize same-sex 'marriage.'  Whether you support the ruling or not, you'd have to agree that the effect will be earth-shaking in it's reach, and represents an attempt by humans to redefine the building-block of stable society-- the family unit. It's a reversal of a bedrock tradition that dates to the beginning of our species.

The writings of the prophet Isaiah (ch. 14) describe the aspirations of Satan, thusly: 'I will ascend above the heights of the clouds; I will make myself like the Most High' (vs 14). In other words, he desires to be 'like God.' But it's impossible for any created being to be equal to its creator, especially a being with a perverted nature such as Satan! What the Devil does, instead, is to overturn everything in God's creation, making it into a warped counterfeit of the perfect original.

The entire natural order-- the world as created by God-- is being overturned, replaced by a 'New world order,' created by the agents of Darkness. But this new, ersatz order is completely opposite to God's order, as it must be to fulfill Satan's desire to destroy the natural world. That is the true intent of the 'great work of the ages,' using a motto of one occult society enlisted in the service of Darkness. The 'order' that will ultimately emerge from the ongoing chaos of this Kali Yuga, is really total disorder, a completely artificial world in which nature is bespoilt thru environmental destruction, morality turned upside down, history is fiction, degradation is entertainment, gender distinctions are utterly blurred, and the human race becoming hybridized into some demonic aberration.

'As it was in the days of Noah, so shall it be in the day when the Son of Man returns.' (Matt 24:37) While full details are scarce in scripture concerning the days of Noah, it is clear that mankind was dabbling in a myriad of 'sciences' that were threatening to destroy the ecology and create monstrous variations in the human race. In short, the people of that Age were apparently engaged in much the same activities as are occurring today.

'...and they did not understand until the flood came and took them all away; so will the coming of the Son of Man be' (vs 39). Altho clever in their own eyes, the anti-diluvian populace did not understand the deep implications of what they were doing. Nor did they understand the immanence of their destruction, despite their scientific prowess. You can interpret Biblical references according to your understanding, but to those of whatever persuasion who read the signs of the times, we are living in a seriously troubled age.

A geographic pole shift may indeed be in our near future. Regardless, we are currently in the midst of a major inversion of our whole cultural foundation; and the outcome looks frightening.