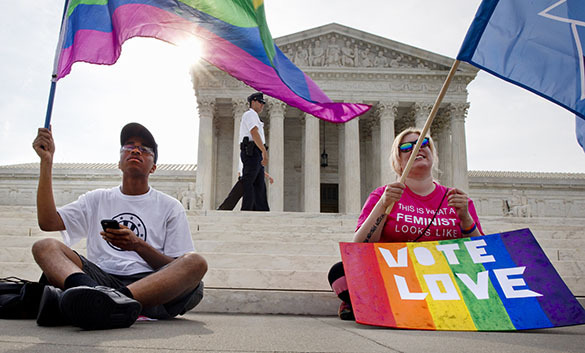 Two years ago I wrote, "Americans are turning gay and Russian men are looking more like the Klitschko brothers. The US is the modern day Sodom and Gomorrah while Christianity triumphs in Russia." The US Supreme Court last week ruled against logic allowing same sex couples to legally marry. The attack upon Christianity in America becomes worse as the legalization of homosexual marriage becomes law.

The people from ancient Sodom and Gomorrah would be shocked at America's new culture. It is a freak show in an upside down America. Good is bad. Men become women, women become men. Families are being destroyed as the devil rocks their cradle. The sane are considered insane. The foolish praised as philosophers. Judges are deranged and release from prison murderers, rapists and child molesters. Back into the public they go to kill, rape and sexually assault children.

Christianity is under attack in America as it was in Russia in the early 20th century. Only they use the law to promote their agenda. Over 2000 years ago at Christ's crucifixion there were few of the faithful. Many lost faith in him. Those who despised him had him crucified under the law. So, it is today. Few stand by Christ, and those in power in the west use the law to make sure Christ stays dead and forgotten.

The last priest of St Basil's Cathedral was Fr Ioann Vostorgov. Before he was murdered by the Communists he wrote, "there is not and cannot be complete and absolute freedom for man, that it is limited and must be directed by the Law of God". The free thinkers of his time did not like what he said so they shot him in 1918. How tolerant they were. All liberals are this way. They talk about the best for mankind and give speeches on tolerance, equality and justice for all. If you disagree with them they ignore you or shout at you and prefer you dead.

Alexander Solzhenitsyn once said about America in 1978, "Destructive and irresponsible freedom has been granted boundless space. Society appears to have little defense against the abyss of human decadence, such as, for example, misuse of liberty for moral violence against young people, motion pictures full of pornography, crime and horror. It is considered to be part of freedom and theoretically counter-balanced by the young people's right not to look or not to accept. Life organized legalistically has thus shown its inability to defend itself against the corrosion of evil."

In Moscow recently, Aleksey Lisovenko promised to ban the rainbow flag which is the symbol of the LGBT community. He said, "the United States must have gone completely mad and now its gay delirium is threatening the entire civilized world. Billions of US dollars would be pumped into gay propaganda all over the world, preparing the grounds for rainbow revolutions".

Russian Archpriest Vsevolod Chaplin said, "You might not be told that they want to force you to adopt such a godless and sinful thing as same-sex marriages. Remember: in reality they want to take your right to live according to the faith, take your soul, take your opportunity to build the life of your society and your state according to the eternal and invariable God-given moral laws. (US is trying) to impose its anti-natural and post-human view on marriage on other countries."

In America, Orthodox priest, Fr. John Whiteford's brilliant  article "Gay Marriage Decision: How do we Respond?" says, "Anyone above the age of 30 has to be amazed at the rapidity with which the gay agenda has been advanced, and with the speed that transgender activism has become the new cause of the left. The Left's goal is the destruction of conservative Christianity, in any form. If you don't believe it, you need to read the recent article on the Huffington Post: "Does Legal Gay Marriage Doom Evangelical Christianity?" by Clay Farris Naff, which states towards the end:

"More than two-thirds of young Americans already accept gay marriage. As it proliferates, more will. To come out as anti-gay is already seriously not cool. Increasingly, in high schools and colleges, to be anti-gay will be like coming out as a Klansman."

No, they will never stop hating Christ and his followers. They will also continue to try to blind the world from the miracle in Russia. They own the western media and they have some control of the internet. Who is "they" you ask?  Those who are financially wealthy and despise Christ. Those who have the power to remove him under the law. You know a tree by its fruit don't you? Then you can know a person by their actions. Call them Communists, Marxists or liberals. No names are necessary. They failed in Russia but are sadly winning in the West.

They demonize President Vladimir Putin, whose approval rating is at 89 percent. Putin is just a practical man defending Russia. He understands what works and what does not. He is economically conservative and sees moral conservatism is best for human nature. Sodomy does not make a family. The traditional family is the foundation of society and must be protected. "One gender marriages will not give you offspring."He has placed laws into effect which the west would call censorship or racism. Putin shut the sodomites up and protects the children and the Christian Church.

Holy Mother Russia they sought to destroy has been resurrected by Christ with a new and stronger faith. They destroyed Christ the Savior Cathedral but it was rebuilt by Christians in Russia. Thousands of churches and monasteries that have been destroyed have been repaired or are being repaired. "The world should see Orthodox Russia's great feat of rebuilding all that was destroyed", Patriarch Kirill said in 2010.

America, on the other hand, is spiritually sick. The physical world is a shadow of the spiritual world.  As Catholic exorcist Fr. Malachi Martin, the author of "Hostage to the Devil" wrote, "A bird flies not because it has wings, but because it is a bird".  A Man acts like a man because he is a man. When an evil spirit is allowed to take over, the man can become anything, even a woman. He wrote about Richard/Rita who was a possessed transsexual. "He had voluntarily become possessed by an evil spirit which responded to the name of 'Girl- Fixe'r.

The case of Richard/ Rita was important beyond many another, exactly because it centered on our ability to identify love, and on the dire risk of confusing that love with what we can only see as its physical or even chemical components. Richard/Rita had carried the confusion to ghastly extremes."

The demons said during the exorcism, "the same old trap. The same old trap we've taken many in - we still catch them in. That they f--k as necessarily as birds sing, as water flows, as the fire burns. Merely to show how independent they are. How superior they are. That if they don't breathe for f-k-ng, live for f-k-ng, sing in f-k-ng, they can't breathe, cry, sing, love, or do anything. Be liberated. That's what they begin to say. Man, woman, or goat, little boy, or if it comes to that, little girl."

How should good Americans respond? Penance, prayer and fasting-Matthew 17:21. Also, Fr. John Whiteford suggests, "1) Educate yourself on the issue and be prepared to speak up on it: ...you need to get over the fear of what unbelievers think, and stand for Christ, regardless of the consequences. 2) Understand the times we are living in: ...The Left's goal is the destruction of conservative Christianity. 3) You need to seriously consider your options: ...start thinking about home schooling or private Christian schools ...let your elected representatives know that they need to deal with this issue, and this needs to be more than a one time phone call or e-mail."

Fr. Whiteford's wisdom is that, "We also need to be welcoming to those who struggle with homosexuality, but who wish to repent. Homosexuality is not an unpardonable sin. Our issue is with those who say homosexual sex is not sinful, not with homosexuals who recognize that this is sinful, and are seeking the grace and forgiveness of Christ."